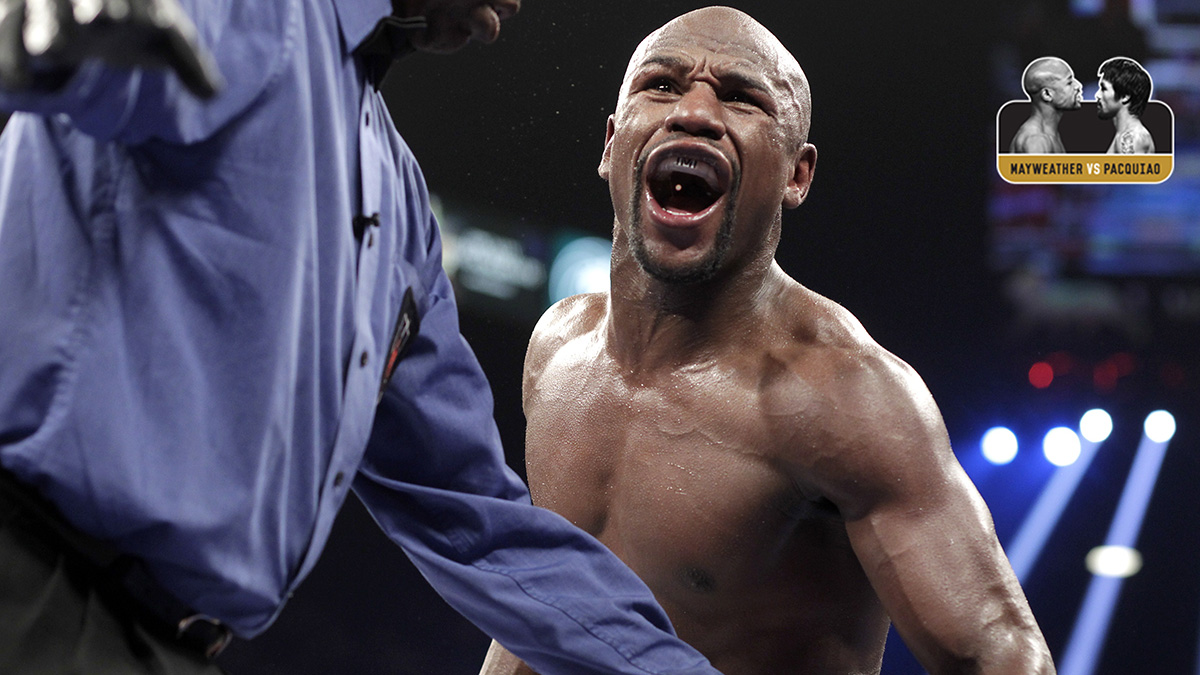 Not long ago, Lee Gause got a phone call. It was Floyd Mayweather Jr., the richest athlete in the world. It wasn’t the first time Mayweather had contacted him. The undefeated prizefighter would sometimes hire Gause, a dentist, for late-night cleanings or teeth whitening sessions during a visit to Manhattan, but Gause was pretty sure his famous patient was not in town. That meant there could only be one reason for the call: Mayweather was ready for a new mouthguard.

Gause flew to Las Vegas to take Mayweather’s dental impression. “Floyd has perfect teeth,” Gause said recently at his office on West 57th Street. Gause’s dark hair was shaved almost to the scalp, and he wore a white lab coat over a gray plaid suit. He handed me a small horseshoe-shaped mouthguard: “This is Floyd’s mouth.” I could see the little grooves of Mayweather’s molars imprinted in the black and red plastic. “This one is to match his Bugatti,” Gause said. “He has a black and red Bugatti and he has a white and gray Bugatti.” Gause pulled a white and gray mouthguard from a pile on his desk.

What about the mouthguard I had read about in the New York Daily News — the one Gause had made from a $100 bill for Mayweather’s May 2 fight against Manny Pacquiao? Gause had laminated the Benjamin between layers of clear plastic, so that Mayweather smiled like a bar mitzvah envelope. “Anybody that put out that he’s going to wear the one with the $100 bill in it — that’s an incorrect statement,” Gause said. Contrary to reports that Mayweather commissioned a single extravagant mouthguard, Gause had actually made a dozen different mouthguards, the dentist explained. Besides the one with the $100 bill, Gause had also handcrafted new mouthguards for Mayweather from gold foil and diamond dust. “I’ve never known which one he’s going to wear,” Gause said. “I always see when he comes out which one he is wearing.” Gause made the mouthguards in his New York office and then returned to Las Vegas for a fitting. Gause wasn’t satisfied with the fit, so he flew back to Vegas a third time for a new impression so he could make a second whole set. “For this fight, he’s going to have like 20 mouthguards,” Gause said. Mayweather paid $25,000 for the service.

Did Gause get the $100 bill in the mouthguard from the bank? To be honest, he was a little tired of questions about the $100 bill. He named his mouthguard company Iceberg, he said, because 70 percent of the innovation was invisible: The $100 bill was just the surface. A well-made mouthguard shouldn’t only protect the teeth, Gause explained. It should also cushion the brain from concussion and open up an athlete’s airways. Even competitors in noncontact sports, like swimming and weightlifting, were starting to wear mouthguards to improve their performance. “I’m telling you: The wild, wild West in dentistry right now is athletic mouthguards,” he said, rising in his seat.

Gause was thirsty for a coffee. “You mind if we walk and talk?” he asked. He removed his lab coat and snapped on a Rolex that was sitting by the mouthguards on his desk. We walked to a nearby café, where Gause resumed explaining his interest in protective mouthwear. “Every time somebody is jumping, every time their feet hit the ground, there’s a force that goes straight up their spine into the central nervous system,” he said. “All of that is cushioned in the mouthguard.” That made any physical activity sound kind of dangerous, especially jumping rope. “That’s a great example,” Gause said. “Are we going to take jump roping away from Americans?” He reached out and touched my arm. “Think of the therapeutic nature of double Dutch jump roping in America, in American history.”

Gause started bouncing on his stool. “Do that!” he commanded. Then he stopped and said, “I just got dizzy.” Was he suggesting we should be wearing mouthguards, right then and there? “I’m not saying that,” he said. What about soldiers in combat zones? Should they wear mouthguards? “One trillion percent.”

Gause took out his phone and showed me a selfie he’d taken with a patient in the dental chair. She was smiling in a red mouthguard and he had pulled his dental mask beneath his chin, like a costume beard. You could tell that Iceberg mouthguards were superior, he said, because athletes actually enjoyed wearing them. “If you go back and watch Floyd’s fights, some of them, he never took the mouthpiece out. He’s in the corner drinking with it, he speaks with it in, and so forth.” Gause had flown to Vegas for Mayweather’s previous four fights. “I’m watching the fight from a different perspective from everyone else,” he said. “I’m just watching the mouthguard to see how it performs.”

Gause wouldn’t reveal how he made his mouthguards. “We definitely use a lot of high-pressure air and a lot of heat,” he said. Gause made mouthguards for football players with their children’s names and for basketball players with their favorite pieces of art. For Andre Berto, a Haitian American boxer, he made a mouthguard with the Haitian flag. “It keeps them inspired,” Gause said. Mayweather was inspired by the name of his entourage, “The Money Team,” so Gause often tattooed his mouthguards with the initials “TMT.”

Gause said he wouldn’t make a mouthguard for Pacquiao, but Mayweather’s opponent already has a guy. Pacquiao was spotted recently sporting a multicolored mouthguard, which he carried in a green plastic case with the words “MouthGuardsForChampions” and “Ed de la Vega, DDS” in gold letters. De la Vega, a cosmetic dentist in Canoga Park, California, wasn’t too impressed when he read about Mayweather’s mouthguard: “I think personally, the only reason he did that is to show off — to tell all the other guys and the media, ‘Hey, look at me: I’m rich! Look at the gold and diamonds in my mouthguard!’”

De la Vega has made mouthguards for Pacquiao since the Filipino champion’s first fight against Érik Morales in 2005. He made the latest mouthguard red, blue, white, and yellow because they are colors of the Philippine flag, and because they represented, de la Vega said, the diversity of Pacquiao’s fans. “I can do a mouthguard in four hours,” he said. While he normally charged $500, he gave Pacquiao the mouthguard for free. “When I asked him how the mouthguard was, his reply to me was ‘Excellent. Approved.’”

Did the dentists care to venture a prediction? “I know Floyd is going to win,” Gause said, while de la Vega had already bet on Pacquiao. No matter which man prevails, boxing fans can expect a beautiful smile when the referee lifts the victor’s hand. “You’ll see Floyd has a perfect smile,” Gause told me. De la Vega, meanwhile, said he’d never seen a boxer with teeth as nice as Manny’s. “No cavities. No impacted molars,” he said. “Immaculate.”