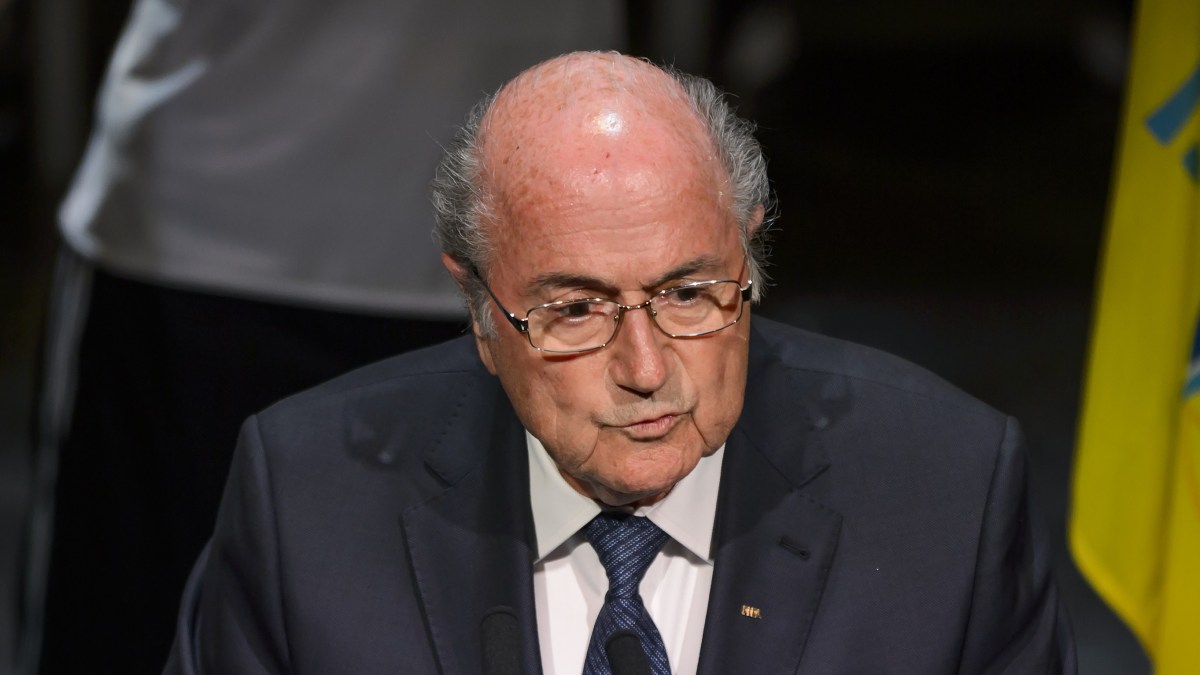 It went down, in the end, like a scene in some 1920s comic novel, Wallander reimagined by Wodehouse: Swiss law enforcement officers politely stormed in through the revolving door of the Baur au Lac, a five-star hotel in downtown Zurich, and surrounded the concierge’s desk. They politely requested the room numbers of several FIFA officials in town for the soccer organization’s annual congress. Then they went to the rooms and politely arrested the occupants. They knocked rather than barged in. They gave the officials time to pack and get dressed. They let members of the hotel staff — “wearing suit coats with tails,” as the New York Times reported — erect a barricade of white bedsheets to shield the arrested men from photographs. After a few minutes, they loaded the soccer officials into small, fuel-efficient hatchbacks and politely whisked them away.

And that was how one of the most notorious cartels in the history of modern sports finally started to wobble — not with a bang but an Opel. The indictment by the U.S. Justice Department of 14 soccer officials and marketing executives1 doesn’t in itself break the power of the high-rent mob running the world’s most popular sport. Sepp Blatter, the buttery eminence at the top of the FIFA pyramid, is almost certain to be reelected to a fifth presidential term later today, in a wild session of the FIFA congress that’s already been interrupted by a bomb threat. But the criminal charges are easily the most serious threat the soccer racket has ever faced, as well as the clearest and best-substantiated account of how corruption in global football actually works.

How does it work? According to U.S. Attorney General Loretta Lynch, who called the misconduct “rampant, systemic, and deep-rooted” when she announced the charges Wednesday, it works in more or less exactly the way we thought it did. If you’ve ever run a Google search that included any combination of “bribes,” “World Cup,” and “Sepp Blatter grinning like the cat that swallowed the Adidas-branded canary,” there’s not much in the Justice Department’s 161-page indictment that will startle you. The short version, extrapolated from the charges: If you want FIFA to do anything, you need votes on the executive committee, and if you want votes on the executive committee, you had better use diamond-encrusted crocodile leather for the cash-stuffed bags you give the committee members as sincere tokens of regard when you greet them at the airport. The Justice Department’s investigation concentrates on more than $150 million in alleged bribes surrounding the awarding of broadcast rights; it’s not a wild leap to conclude that other branches of the organization’s business — say, deciding which country gets to host the World Cup, or which puffy eel gets to be FIFA president — run on pretty much the same rails.

In a weird way, though, the everyone-already-knows-this aspect of the indictment made the arrests more surprising, not less. FIFA has been operating for so long in this bizarre twilight of consequence-free public wrongdoing that you started to believe that its members were as far above the law as they thought they were. Signs that the walls were closing in — the scandal around the awarding of the 2018 and 2022 World Cups to Russia and Qatar, respectively; FIFA’s hilarious censoring of the corruption report that FIFA commissioned itself — were easily misread as the marks of a zero-effs-given impunity. And so the crisp, comic efficiency of the arrests in Zurich was shocking precisely for its air of inevitability. It said of course someone can do something about this — an idea that seemed to come from a different universe than the one that contained FIFA.

But then, reconciling wild swings in tone has always been part of following FIFA corruption. This is an organization whose cast of characters is as ludicrous a bunch of grotesques as you could cram into one auditorium, a Roald Dahl rogue’s gallery of sniffing and preening mock patriarchs. The informant who helped make the case for the U.S. government was strip-club-loving ex-CONCACAF executive Chuck Blazer, an outré muppet who famously rented a $6,000-per-month apartment in Trump Tower just for his cats. It’s impossible to read about, say, Nicolas Leoz, the Paraguayan former ExCo member who allegedly demanded a knighthood in return for supporting England’s World Cup bid, and not want to write off the whole topic as a chamber comedy full of trivial loons. Who gets hurt if a bunch of colorful old crooks defraud some corporations, after all? McDonald’s can take the hit.

But then you zoom out a little — this is what I mean about swings in tone — and suddenly you’re face to face with the truly dark and unfunny consequences of a global sports system that’s profoundly broken. It’s important to stress this, because the “why should I care” angle on FIFA corruption can get a little blurred. Per paragraph 73, the indictment itself treats FIFA as the real victim here, since it’s FIFA from which money was allegedly stolen — and you can see why it would have to do this, to separate the institution from the individuals accused of harming it, but still. It implies a closed system where the only thing that’s wrong with the rights-conspiracy racket is that soccer hasn’t been as well administered as it maybe could be, as though this were merely an internal issue. I’ve read reactions that suggest the true victims are U.S. taxpayers. I’ve seen earnest comparisons between FIFA and the NCAA (both “greedy”) and between Sepp Blatter and Roger Goodell. None of this properly registers the scope of what FIFA has done.

So I’ll put this as simply as possible. FIFA corruption matters because FIFA’s actions keep killing people. There is a clear line connecting the absurd antics of the aristo-doofs in Zurich and the 4,000 migrant workers whom the International Trade Union Confederation estimates will die on construction projects in Qatar before the 2022 World Cup. There is a clear line connecting FIFA officials to the murders of whistle-blowers in South Africa, to the bulldozing of schools and poor neighborhoods (so tourists won’t have to see any unpleasantness), to widespread accusations of the misuse and theft of public funds, to the clearing out of Brazilian favelas, to the violent suppression of dissent by governments that weren’t phenomenally good at tolerating dissent in the first place. This is why you should care about FIFA corruption: not because it’s the equivalent of NCAA-type malfeasance (which is bad enough), but because it’s spreading human misery and death on an international scale.

It’s not hard to see why this would be the case. You don’t have to think the World Cup should be an instrument of neoliberal affirmation to see how putting ExCo votes up for auction might land the auctioneers in business with bad people. First the TV-rights and corporate-sponsorship schemes would create a culture of graft — connections and intermediaries would spring up to facilitate the process, everyone would learn the ins and outs of shell companies and how to hide assets, etc. Selling ExCo votes to potential host countries would then give authoritarian governments an edge in the race to host the tournament. Granting the tournament to those governments would authorize them to do whatever they wanted in preparing for it — hand cronies major construction projects, step on protests, make tax money disappear, whatever; all FIFA wants is a slick show. It would also grant the international prestige of the World Cup to whoever stepped up to rent it (noted anticorruption advocate Vladimir Putin has been backing Blatter this week). Dead laborers and machine guns on street corners wouldn’t have to worry anyone in Zurich, because their aim wouldn’t be to protect the image of the game; it would be to get paid while the con was still running. The flow of money — from corporations to FIFA, from corporations and governments to ExCo members, from FIFA to the individual football associations that vote for FIFA’s leadership — would become regular and self-sustaining, ensuring that reform from within was impossible, even for Placido Domingo. Many of these payments would be legal, one of the signal features of an organization like this being that the normal order of business is eventually made indistinguishable from bribery.

This week’s arrests don’t address all of these woulds, of course — one of the crises of FIFA corruption is that its fallout is so broadly distributed as to be almost unaddressable by any outside body. But the indictments address something, which means we’re already in better shape than we were last week. Most of the big questions pertaining to the criminal cases are still unanswered, obviously, including the significant and delightful question of who will roll on whom2 and whether the thread will reach as high as Blatter. Jack Warner, the legendarily crooked Trinidadian ex-CONCACAF president who’s now one of the accused, is threatening to spill everything, but he’s threatened that before.3 The Swiss have opened a parallel investigation into the awarding of the 2018 and 2022 World Cups. In the meantime, calls to redo that vote keep getting louder, even if, so far, FIFA has shown no signs of listening.

Blatter may remain as president, and Blatter is nothing if not cunning when it comes to ensuring his own survival. Still, I don’t think it’s an exaggeration to say this is the first time in the recent history of FIFA when change has almost seemed possible. (For one thing, Blatter doesn’t control everything within FIFA; it would be a gorgeous irony if he were taken down by the kind of low-level corruption he might have tried to rein in to protect the high-level stuff.) But as the silly intrigue plays out among caricatures with Windsor tie knots, don’t lose sight of what this is really about. That these crimes have been carried out by clowns doesn’t make them any less serious. That their victims aren’t acknowledged in the official paperwork doesn’t make them any less real.