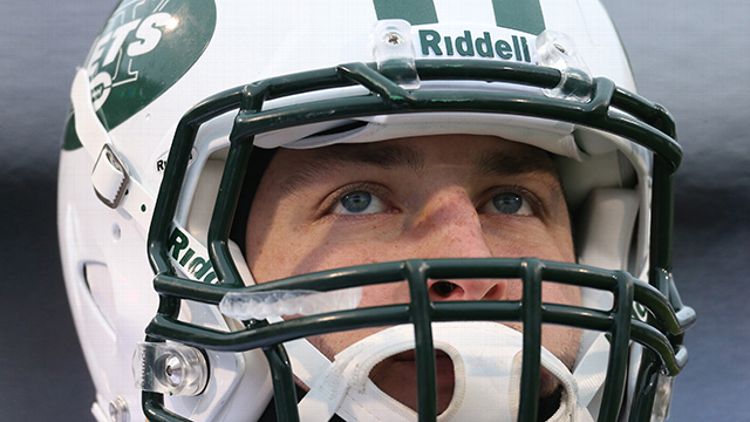 Oh dear. Tim Tebow. Do we have to do this? There’s way more meaningful stuff happening elsewhere this week, in case you haven’t noticed. This isn’t going to be fun for you, or for me, or really even for Tim Tebow. Fine. Just know that I think your obsession with backup quarterbacks is weird and unsavory.

Well, it’s safe to say the Tim Tebow experiment in New York did not quite go as planned. It took about two months for everyone involved to realize as much. Out of sheer misguided desperation, though, the Jets kept Tebow on the roster through the 2013 draft in the hopes of somehow trading Tebow and acquiring a draft pick. When that didn’t happen, the Jets wasted little time in releasing the former first-round pick. It didn’t work because nothing with the Jets worked last year. Let’s all move on.

Does Tim Tebow have discernible skills that make him an employable NFL quarterback? Yes. He was certainly effective in his role as a “punt protector” last year, where he converted on three of four fake punts. Tebow’s exhibited some ability as a runner in short yardage, where his 236-pound frame can push the pile. He would also offer some ability in those situations as a passer on trick plays, as his above-average arm strength (for a running back) could allow him to chuck bombs downfield. I don’t know that those combined skills are enough to justify a roster spot, but it’s something.

The idea of switching Tebow into a tight end or H-back is really a nonstarter. While some NFL teams might theoretically have some interest in doing so, the reality of the league is that you only get 53 roster spots to play with during the regular season. This isn’t baseball, where you can ship Rick Ankiel down to the minors for two years while he learns to play the outfield. Tebow would have to learn on the fly while taking up valuable roster space that would otherwise go to a viable special-teamer. So, if you were planning on making that sort of switch with Tebow, you would have to basically sign him now, drill him all summer at the new position, and then either find some sketchy medical excuse to put him on injured reserve, waste a roster spot with him on the bench for most of the year, or actually use him as a key blocker with no experience at the position. For the pain of enduring months of an unsettling media circus around your team, some aggressive organization might possibly end up with a blocking tight end who makes more than the league minimum. Yay! It’s a proposition that promises a lot of work for virtually no upside.

It appears that the league shares those sentiments about Tebow. His most fervent suitor over the past two years has little interest, as the Jacksonville Jaguars have moved on from Tebowmania. New general manager Dave Caldwell made it clear in his initial press conference that he would not sign Tebow if he were to be released. General managers lie, of course, but Jaguars owner Shahid Khan confirmed Monday in a statement that the team would not pursue Tebow. Tebow seems like the kind of player Al Davis would have taken a chance on 10 years ago, but the post-Davis front office in Oakland has far more refined tastes and a developmental quarterback (Matt Flynn) already taking up its time. Tebow’s decision-making in the read option has been curious at best in the past, so it’s no surprise that teams like San Francisco and Seattle have already announced they’ll pass on him. There’s just not an obvious landing spot out there.

An uninterested NFL leaves Tebow an unforgiving fallback plan. If Tebow wants to continue playing football, the next tier of professional competition would be in the Canadian Football League, where the Montreal Alouettes own Tebow’s rights. If Tebow were to go to Montreal, though, he would be playing behind a CFL legend, 40-year-old quarterback Anthony Calvillo. And if you think Tebow would easily beat out some CFL passer in a competition, Alouettes general manager Jim Popp made Tebow’s fate very clear on Monday: “He can come here and compete to be the backup to Anthony Calvillo and learn the game.” Ouch.

And really, would it be the worst thing if this were the end of Tebow’s professional career? He would go out having won a division in his only year as a starter, having produced miraculous comebacks on multiple occasions. The year with the Jets will get written off as Jets buffoonery after a few years. Tebow’s legacy as a square peg somehow convincing a round hole to win football games they have no business of winning would stay strong, without years of eking by as a guy playing out of position and not mattering.

Tebow could then move on to the next part of his life: Being famous person Tim Tebow. What does that mean? This is Grantland, right? As has been suggested in the past, Tim Tebow as The Bachelor would be the highest-rated show in the history of television. Even Mark Sanchez, Dave Caldwell, and Anthony Calvillo can’t get in the way of that.