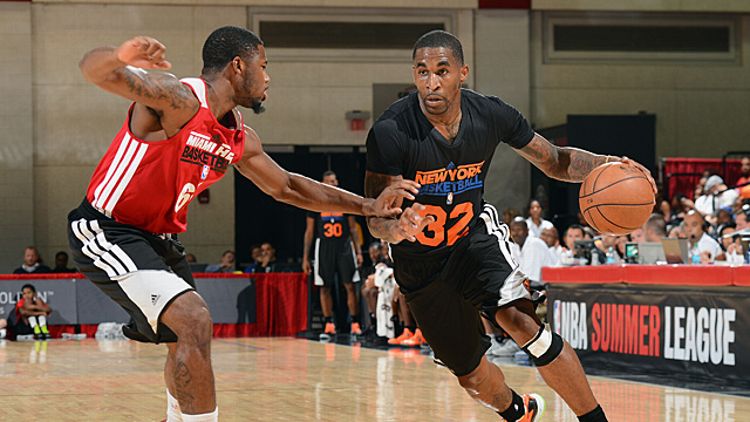 The New York Knicks operate like a submarine plumbing the ocean depths — its movements invisible from the surface, its pilots cut off from outside influence, navigating by echolocation and breathing each other’s recycled farts. We can really only guess at the reasons why the Knicks do the things they do.

As the organization retreats from the sphere of public sports discourse, the first law of #hottakes thermodynamics takes effect. Professional sports — a bio-economic organism around which an ecosystem of self-sustaining information and hype-delivery has evolved to support literally thousands of people who will never have to make a jump shot — abhors a vacuum, after all. Vacuums are anathema to the system itself. Lacking corroborating quotes and declarative statements from team officials, all that’s left to fill the eternally gaping maw of newspaper columns, blog posts, and radio segments are statistics, game analysis, and conjecture about the motives of the mysterious coterie of executives silently piloting the submarine through the deep dark.

Discussions about the Knicks among those who follow them, both in amateur and professional capacities, often veer into whispers of things someone heard from a guy who knows a guy. We attempt to psychologically profile the team’s cipher of an owner from a distance of no less than 500 feet and wonder whether Madison Square Garden has been taken over by a cabal of agents and industry insiders whose only goal is to turn the building into a bastion of crony capitalism. Conspiracies abound: I heard Dolan eats lunch with Isiah Thomas every single day inside his walk-in fedora humidor.

To be fair, we can never really know what’s going on in the decision-making centers of any sports team, or any conscious intelligence outside our own heads, if we can even ever know that. It’s just that the conclusions one might draw from following the offseason personnel maneuvers of, say, the Portland Trail Blazers don’t naturally lead to serious consideration of backroom conspiracies. With the Knicks, anything is possible.

Which brings us to Chris Smith, younger brother of J.R. Smith. On Friday, the official day for releasing news you don’t want people to pay attention to, the Knicks announced their (possibly?) final roster cuts. Chris Douglas-Roberts, Ike Diogu, C.J. Leslie, Jeremy Tyler, and Josh Powell were out. Toure Murray, Cole Aldrich, and Chris Smith were in. This is notable because Chris Smith sucks like an open airlock on a space station. Maybe that’s not quite right; what I should say is, in the limited sample of games in which Smith has been given the chance to show his talents against something approaching NBA skill levels, he has been found wanting. Perhaps this means nothing and he can develop into a rotation NBA player someday, after a good, long soak in the healing waters of the NBDL. It’s not impossible, I guess.

Still, the best predictor of future performance is past performance, and Chris Smith’s past performances don’t exactly scream “NBA PLAYER!” They don’t even quietly whisper “NBA PLAYER.” Smith’s 2013 NBA preseason statistics: three games, 20 total minutes, 1-of-7 from the field, three points, three rebounds, two assists, one turnover, two fouls. Chris Smith’s 2013 Las Vegas summer league statistics: five games, five points per game, two rebounds per game, 1.8 assists per game, 22 percent shooting, and 11 percent 3-point shooting, all in just a bit under 20 minutes a game. Digging deeper, in five summer league games, Chris Smith was 1-of-6, 4-of-15, 1-of-6, 0-of-5, and (yay!) 3-of-9. Also, Chris is 26 years old and plays point guard, a position at which the Knicks have three players under contract. Also, the Knicks desperately need cover for Tyson Chandler.

So, the obvious question is this: Wha the fuck?

Let us now peer down into the dark water to try to glimpse USS Knickerbocker somewhere beneath the waves. First, some detail:

• Carmelo Anthony has declared his intention to test free agency in the summer of 2014.

• Basketball insider and all-around NBA Zelig William “Worldwide Wes” Wesley is a consultant for CAA and is said to be one of James Dolan’s closest advisers.

• The Knicks recently replaced general manager Glen Grunwald, the architect of last season’s 54-win roster that got to the second round of the playoffs for the first time since 2000, with Steve Mills. Mills is an accomplished businessman who has never run a basketball team before. He is known for having an extensive list of contacts within NBA power circles and for being close with Worldwide Wes. Mills has stated his desire to bring more of an analytical approach to running the Knicks, leading Grantland’s own Ben Detrick to surmise that the stat that justifies signing Chris Smith must be Weedcarrier Shares.

Now, I’d like you to take a second to put on this peaked cap made of tinfoil. OK. So, acknowledging that there’s no way to know for sure, the theory I subscribe to goes something like this: The Knicks, in their desperation for relevance in the form of a marquee name, sought to create an environment that Carmelo Anthony would find comfortable as they were pursuing him during the winter of 2010-11. To this end, the team poached Nuggets front-office executive Mark Warkentien, whom Melo likes, and installed him as director of pro player personnel in advance of Melo’s sign-and-trade, most likely at Melo’s request.

Upon arrival in New York, Melo sought to create an environment where he could trust the motivations of those involved in the team. Among NBA players, CAA is viewed less as an agency and more as a collective of players, coaches, and agents who act as an extended support system for each other outside of the quotidian machinations of the traditional power structures within big-money sports. This naturally led to the expansion of CAA’s influence within the Knicks franchise. In a 2012 piece about the Jeremy Lin affair, which reads like Melo’s first-person explanation of his side of that story, True Hoop’s Henry Abbott describes Carmelo’s vision for his move to New York as his wanting to “build a basketball family.” Well, one way to do that is to have all the important people involved with the Knicks be represented by CAA. Another, less metaphorical, way to do that is to have CAA represent actual members of the same family.

In May 2013, Chris Smith fired his agent Marc Cornstein and signed with CAA’s Leon Rose. On May 19, he tweeted, “I will be back next season along with my big brother.” A few days before the Knicks announced Chris Smith’s signing, Coach Woodson had this to say about potentially keeping Chris: “I look at him just like I look at J.R., though J.R. is the guy who played in a uniform and has been very productive for us. I have a great deal of respect for that family. That’s his brother. I respect that. We’ve got to make some decisions. What those decisions will be, I don’t know.” OK.

The question then becomes this: Why? To what end? I think, in addition to just generally getting the Smith family paid, it’s a demonstration to Melo, in advance of his free agency, the lengths the team is willing to go to maintain the family atmosphere he so covets. Add to that the team’s acquisition of a backroom wheeler-dealer like Steve Mills, a guy with existing ties to Worldwide Wes, and now you’re telling Melo that you’ve got a front office that’s ready to work traditional channels and shadows below the surface to get deals done.

But we can go a little bit deeper. Robert Silverman of Knickerblogger put forth a theory worthy of all the false-flag Benghazi birth certificates that paranoid Knicks fans can muster. The theory goes like this: Once Chris Smith’s contract becomes guaranteed, the Knicks will cut him and sign Jeremy Tyler (if healthy and still available) or a convincing simulacrum. It would be a win-win; the Smiths get paid, the Knicks get the player they want.

Will it happen? It’s just a theory.