Are You Ready for the Big-Man Renaissance?

For a long time now, it’s been popular to worry about the decline of big men in the NBA. Lately, it hasn’t even been a worry. It’s just a fact.

It happened for a couple different reasons. The NBA eliminated handcheck rules, which made it easier for guards to be the focal point of the offense. Plus, the league also relaxed the illegal defense rules, making big men easier to defend. Add to this the rise of 3-point-oriented offenses — partly in response to both of those rule changes — and of course big men aren’t as relevant as they used to be.

Plus, let’s be clear: Most of the big men just haven’t been that great. Remember when Tristan Thompson was a top-five pick? Or Enes Kanter and Derrick Favors? Meyers Leonard? Remember Andrew Bynum’s whole career? Or Kwame Brown? You can point to rule changes, but the biggest problem has been talent.

Teams still want good big men — they just can’t find any. My favorite analogy for this came from @DragonflyJonez, who compared today’s big men to New York rappers. Every few years, there’s a new hope to save the whole city (Roy Hibbert, Brook Lopez), but more often than not they turn into Papoose (Roy Hibbert, Brook Lopez). Or sometimes they’re really good, but they play almost like tall small forwards — let’s call that the equivalent of the New York rapper with a Southern flow. It’s not the same.

I mention all of this because two weeks ago I was talking to Grantland’s Danny Chau, looking at this season’s freshmen class in college basketball, and complaining about how underwhelming this year’s best draft prospects are.

They were all big men. How good could they possibly be?

Fast-foward to last night. Jahlil Okafor looked completely unguardable against Michigan State. Cliff Alexander battled Kentucky and showed flashes, even in a big loss. And Kentucky … Kentucky is like basketball science fiction. John Calipari has a Voltron of 7-footers that he’s literally platooning in hockey shifts. It all looked so unfair. That was part one of the night.

Part two came once the Kentucky game turned into a blowout. It was time for Kings-Pelicans. That’s when I watched DeMarcus Cousins and Anthony Davis going to war with each other, trading ridiculous finishes at the rim, and battling to the bitter end, in a game between two teams that have surprised the entire league, almost entirely because of their superstar big men. It was the most fun I’ve had watching a game maybe all year. I can’t wait to see Boogie-Brow showdowns for the next decade.

More important, if the college games were a sign of what might be coming, that Kings-Pelicans game was the giant flashing billboard to make sure everyone gets the message: Big men are coming back. 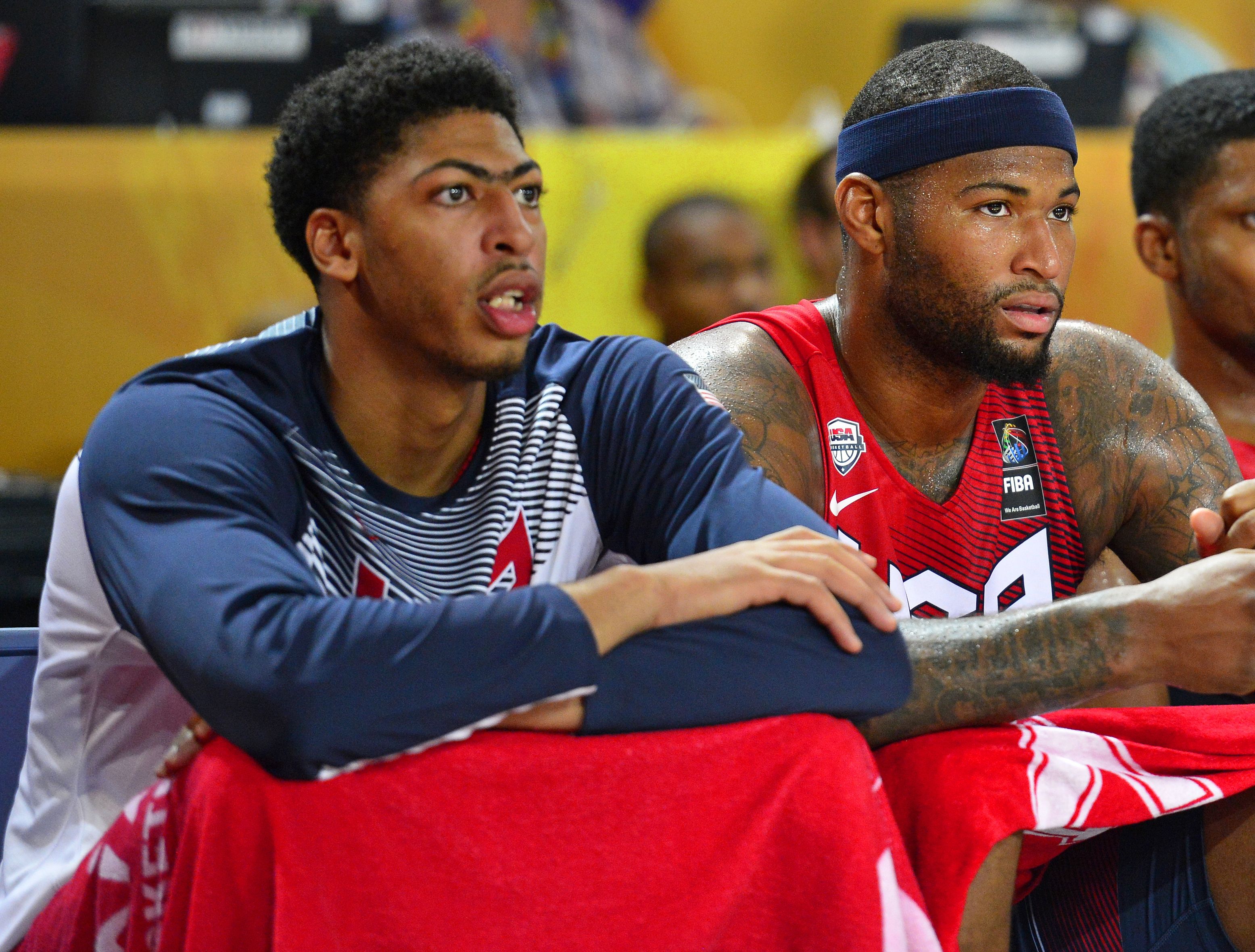 For almost a decade now, Dwight Howard has been the most dominant big man alive without ever totally dominating, and most other centers are either extremely well-paid alley-oop finishers (DeAndre Jordan), defensive specialists (Andrew Bogut, Joakim Noah), or depressing placeholders to boo while fans wish the coach would just look at the stats and go small (PERK!).

I’m pretty sure it’s all about to change over the next years. Boogie and Davis are already dominating on a nightly basis, they’re the focal point of every offensive set, and it’s working. The big-man renaissance is already happening. And look at the guys coming next.

Jahlil Okafor, Duke. He’s 6-foot-11 with quick feet around the rim and soft hands. It’s not immediately clear that there’s anything he can’t do. He made 80 percent of his shots in 30 minutes against Michigan State last night. Eighty percent! Even with foul trouble in the second half, he finished with 17 points.

He’s 270 pounds, but still looks skinny somehow, which is a good sign. He’s considered the favorite to be the no. 1 pick in June’s draft, and the season didn’t even have to start before Coach K said Okafor would surely move on soon. You could see why on Tuesday.

On Texas’ first possession after Myles Turner checked in at the 16:05 mark, the freshman took a difficult turnaround jumper from the baseline for his first ever collegiate shot … and nailed it. Just two possessions later, Turner let it rip from 17 feet near the top of the key … and nailed it. And then on the very next possession, Turner did his best Dirk Nowitzki impression, taking a step-back fadeaway from about 13 feet … and effing nailed that, too.

Cliff Alexander, Kansas. He’s only 6-foot-8 or 6-foot-9 depending on where you look, so that’s not ideal. But I was watching Kansas-Kentucky last night with a friend who follows college recruiting, and at one point he turned and said, “Cliff Alexander, that guy is a motherfucker.” Sold.

He makes up for the lack of height with a ridiculous 7-foot-3 wingspan — the same as Okafor, for perspective — and a combination of dunks, athleticism, and blocks that all add up to general ass-kicking. Kentucky overwhelmed Kansas for the most part, but Cliff held his own against the onslaught of UK big men. For more, read Ricky O’Donnell’s report on him, especially for the hat fake-out at his recruiting announcement.

Willie Cauley-Stein and Dakari Johnson, Kentucky. Cauley-Stein is 7 feet, 240, and Dakari Johnson is 7 feet, 255. Having just one of them would give any team in America a massive weapon that nobody could deal with. Kentucky has both of them, plus Alex Poythress — a.k.a. future Tony Allen — and Marcus Lee, making it all even more unfair. For the NBA’s purposes, Cauley-Stein is the better prospect — at worst he’s JaVale McGee, at best he adds an offensive game to go with rebounds and blocks — but Johnson will be a first-round pick, too. He’s got deceptively quick feet to go with tree-trunk size, and his offensive game should improve enough this year, making him a legitimate sleeper next June. Oh, and Kentucky also has …

Karl Towns, Kentucky. With apologies to projected no. 1 pick Okafor, Karl Towns is going to be the no. 1 pick. You may think this an overreaction after Kentucky’s domination on Tuesday, but Towns had only nine points and eight rebounds in 18 minutes. It’s how he did it that won me over. He was quicker AND more powerful than anyone on the floor. I know it’s early, but I’m already convinced Karl Towns was engineered by doctors in a science lab somewhere in the Dominican Republic.

This is also a good time to remember that when Towns was in the 10th grade, Calipari went down and coached the Dominican national team to recruit him to Kentucky, a.k.a. the single most John Calipari move John Calipari has ever pulled.1

At least Towns was worth it. He’s strong, he’s quick, he moves fluidly for someone that big, he can score inside and outside, and against Kansas — not some mid-major — he was grabbing rebounds like a 18-year-old surrounded by eighth graders. “Scouts compare him to a young, less volatile DeMarcus Cousins,” Chad Ford wrote a few weeks ago. 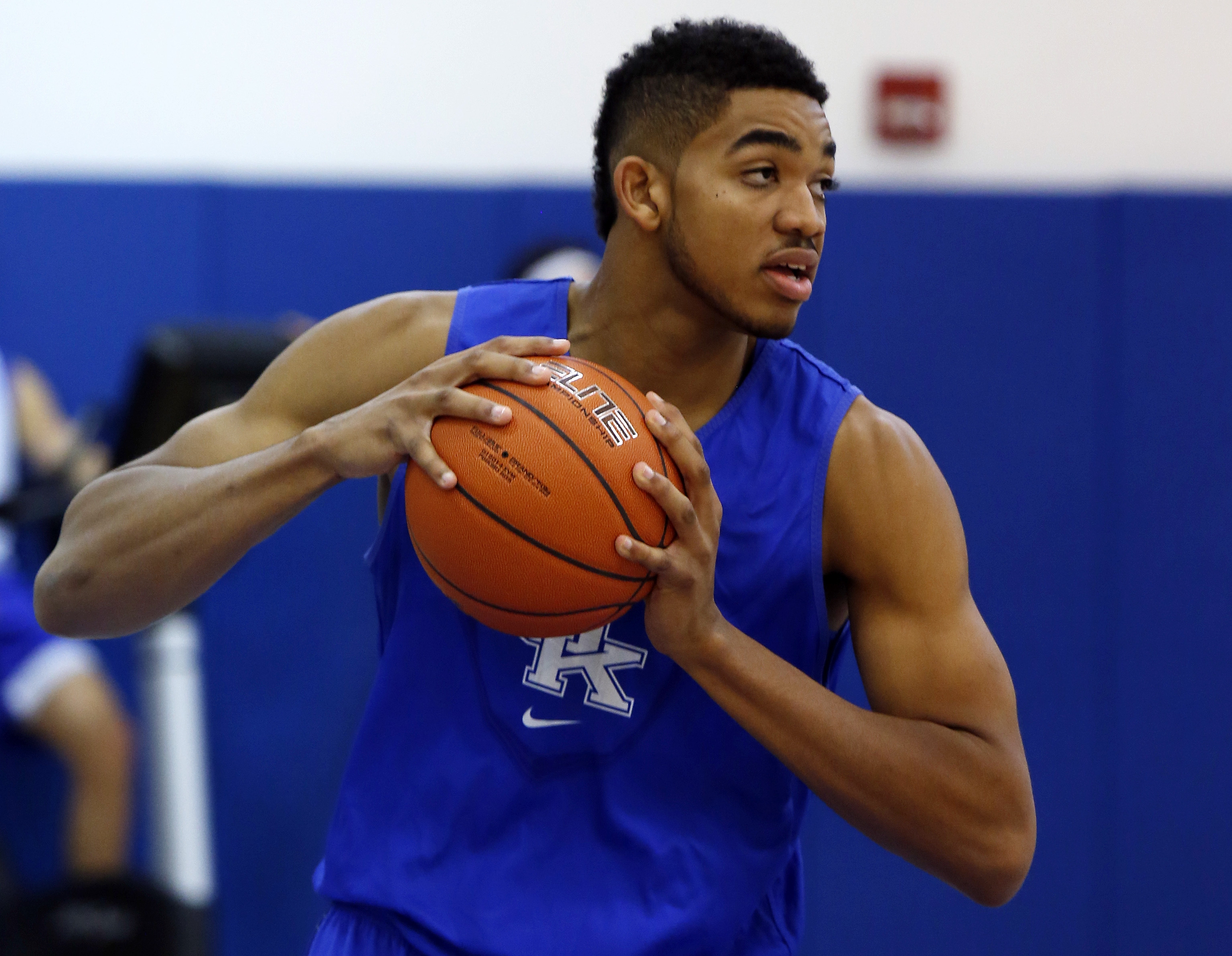 Will all of these guys be superstars in NBA? Obviously not. Odds are, just one will make it that far, maybe two or three.

But even if just a few of these guys work out, you’re talking about adding a couple more great big men to the pros, and suddenly it means more talent down low than the NBA has seen in 10 years. You’ve got the Brow takeover and the Boogie revolution that’s already happening; plus, players like Nerlens Noel, Julius Randle, and Joel Embiid could all still pan out. Add the rookies-to-be, coming next year.

This influx of talent could change the game. As the NBA gets more superstars dominating down low, the need increases across the board. If teams can’t get Boogie or Davis or Okafor or Towns, they at least need someone who can guard those guys and is smart enough to stay on the court. That’s where players like Johnson, Alexander, and Turner start to become a lot more valuable. A rising tide lifts all big-man boats.

Nobody’s saying all this will definitely change the way basketball looks and/or bring the center position back to the All-Star ballot, but look around the NBA and look at college. There’s something happening, right?

The best young players in the world are all gigantic.