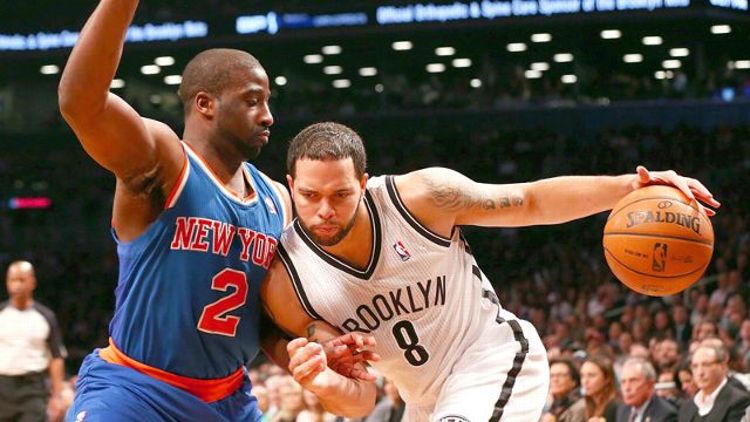 The NBA landscape will look much different toward the end of the regular season than it does now, but it’s still insane to think about. If the season ended today, the Toronto Raptors, who aren’t even sure if they should be trying to win this season, would “earn” the no. 4 playoff seed in the Eastern Conference by capturing the Atlantic Division. In related news: They are 5-7, and not very good at professional basketball.

The Atlantic Division probably won’t stay this awful, though that depends almost entirely on one of the New York teams finding its footing. And that seems less a certainty now than it did a week ago, as early-season hiccups morph into long-term problems. The Knicks are 3-8, miserable on both ends of the floor, with a defensive keystone who still might be a month away from returning. The Nets are also 3-8, looking old and slow, with half their roster injured. Meanwhile, the Sixers have regressed after the 3-0 hysteria, and the Celtics are bad — and could make themselves worse via trade.

Perhaps this is the year, then, that the NBA will finally have to confront the reality that divisions are stupid and should be abolished. If some putrid Atlantic Division team limps into the playoffs with a 39-43 record, and yet still snags the no. 4 seed and a better-than-deserved first-round matchup, it will be embarrassing for everyone involved. The only thing that could stave off such humiliation is the Eastern Conference being so abjectly horrible that a team could finish 39-43 and actually have the fourth-best record in the conference. The Eastern Conference right now is a three-team league. These are bad, bad times on the right coast.

Divisions exist, in theory, to invigorate rivalries and ease travel. They accomplish neither. Geographic proximity creates rivalries, but geographic proximity will always exist regardless of divisions. The Knicks-Nets crosstown thing, the subject of endless silly preseason hype (WHAT DOES RAYMOND FELTON THINK OF THE THING PAUL PIERCE SAID??? AND HOW WILL J.R. SMITH RESPOND???), won’t die if the league suddenly vaporized the Atlantic Division.

Playoff history also creates rivalries. The Clippers have a better rivalry with the Grizzlies than they do with any team from the Pacific Division, save perhaps for the Lakers. Knicks-Pacers means more than Knicks-Sixers or Knicks-Raptors.

The travel argument hasn’t held for a long, long time. Teams play each divisional rival four times per season. Guess what? They also play six of their remaining conference rivals four times per season, and the remaining three conference teams three times each. Dividing the league into two conferences, West and East, eases travel. Dividing the conferences into divisions does not; for the Celtics, all the way up in frigid New England, there is no difference this season between the nearby Knicks and warm-weather Magic. They play both four times.

Nobody cares about divisions, anyway. Teams are sheepish about hanging division championship banners, and some choose not to do so. Several players, including Gerald Wallace in a recent rant (as if Crash has done anything but rant this season), have rather loudly proclaimed the irrelevance of divisions.

Rewarding a division winner in any way in terms of postseason seeding is stupid. The league knows this, too, which is why it has taken steps to minimize the reward over the last half-decade or so. The nadir came in 2006, when the league was still using a system that guaranteed the three division winners in each conference the top three playoff seeds. Denver won the pathetic Northwest Division, whatever that is, with a 44-38 record, and secured the plum no. 3 spot even though six other Western Conference playoff teams had better records. That group included Dallas, which finished 60-22, the second-best record in the conference, but good enough only for second place in the brutal Southwest Division.

What happened? The league slotted the Mavs into the no. 4 spot, and the Grizzlies and Clippers staged a furious late-season tank-off to slide into the no. 6 seed — avoiding Dallas and snagging a matchup with the overmatched Nuggies.

The league realized the problem and tweaked the rules so that a division winner is now guaranteed a top-four seed, and little else. If only one non–division winner finishes with a better record than a divisional “champion,” all is well — the team with the better record gets the no. 3 seed, and the sad-sack divisional champ falls to no. 4. The situation isn’t even all that dire if two non–divisional winners finish with better records than a divisional champ. In that case, one of those non-winners gets the no. 3 spot, and the other one, with the lesser record, gets the no. 5 spot — and home-court advantage over the divisional winner in the (undeserved) no. 4 seed. This is what happened in 2011-12, for instance, when the Celtics won the Atlantic Division with a 39-27 record, earning the no. 4 seed over the 40-26 Hawks, but had to go on the road for the first two games of that Atlanta-Boston series. Boston was the no. 4 seed in name only, and the post-2006 rules punished them with home-court disadvantage and the no. 4 spot that comes with a near-guarantee of meeting the top seed in the second round. No harm, no foul.

But if you get three non–division winners with better records than a division winner, a rare occurrence, the system collapses on itself. And divisions have additional relevance on seeding. Winning a division is the first tiebreaker to decide seeding between teams that finish with the same record, a quirk that benefited the Lakers when the Pacific Division was terrible (in 2010-11, for instance) and very nearly came into play last season, when Denver, Memphis, and the Clippers were very close to finishing with identical records.

How to Fix It

I mean, seriously: Reread those last four paragraphs. Divisions aren’t worth this much mathematical hand-wringing. Just get rid of them, use a two-conference system, and pick the top eight teams. The league wouldn’t even have to change the 82-game monstrosity of a schedule one bit.

Of course, the ineptitude of the Atlantic Division brings another long-term trend into stark relief: The Western Conference is so much better than the Eastern Conference that it is, to use the word again, embarrassing. The league really, really needs the Nets and Knicks to get their shit together in order to shrink the interconference quality gap to a less laughable size.

But, holy crap, have the two conferences gotten off to polar opposite starts this season. The West is 37-17 (!) against the East, and every borderline playoff team in the Western Conference that is trying to win is actually, you know, winning. Portland, Dallas, and Minnesota are all over .500, and Denver and New Orleans lurk just one game under.

Almost literally the opposite has happened in the East. Borderline playoff teams that desperately want to win haven’t managed to do it. They made bold playoff proclamations after winning the lottery (again!), signed big-name free agents, traded future first-round picks, came out against tanking, and wrote “playoffs” on their shoes, but the Detroit-Washington-Cleveland-Milwaukee quartet of sadness cannot get out of their own way. The Wiz have at least won two straight after another dispiriting start, an annual tradition now in D.C. They’re still just 4-7. Detroit had the worst defense in the league until just two days ago, when the awful Jazz fell past Detroit — and into last place in both offensive and defensive efficiency, a rare double. Half of Milwaukee’s roster is injured, and the new franchise centerpiece got into a barroom brawl, left his dogs out in the cold, and lost his all-caps status in this space.

Some of these teams will turn things around. But as things stand now, the winning percentage gap between the no. 8 seed in the West (or, heck, the no. 9 seed) and the no. 8 seed in the East is larger than it has ended up in any season since the 1999 lockout. That doesn’t have much meaning since it’s very early, and fewer games naturally creates bigger jumps (and falls) in winning percentage.

But if the trends keep up, this season could at least enliven the discussion about fairness and playoff spots. Look, the league isn’t eliminating conferences, placing all 30 teams into one pool, and balancing the schedule — even if doing so would prevent what happened in 2007-08 and 2009-10, when it took 50 wins to make the Western Conference playoffs and just 41 (in 2010) and 37 (in 2008) to make it in the East. As long as you’re playing 82 games, you can’t ask the Clippers to play the Knicks and Nets as often as they do the Kings and Lakers. It’s too much. Teams in the Northwest Division, especially the Blazers, already log thousands more air miles per season than teams from the other five divisions. Punishing them with more is unfair. If you want to lump all 30 teams into the same playoff-seeding pool, you’re wading into a much different argument about schedule length.

It would be easier to scrap the conference system and just take the 16 best teams into the playoffs if the league adopted something like a 58-game schedule, in which every team would play every other team just twice — and had that schedule unfold over the same time period as the current 82-game set, to not overburden teams with travel. But that’s not happening anytime soon.

So what’s the solution? The boss here has gotten a lot of traction by suggesting the Entertaining-as-Hell Tournament, in which the top seven seeds in each conference get guaranteed playoff spots, and the other 16 teams enter a tournament to win the last two seeds. I like the general concept, and I’d be game to expand the tournament so that only the top six seeds are guaranteed postseason spots.

But should every team below that get to participate in the Entertaining-as-Hell Tournament? How about if we just took the four best non-playoff teams in each conference — the nos. 7-10 seeds — and put them into some kind of tournament for the final two postseason spots in each conference? The four semifinalists would all make the real playoffs, and the last two rounds of the tournament would determine their seedings. That way, the Eastern Conference bottom-dwellers would have to earn their playoff spots by actually beating Western Conference teams.

That sounds great in theory. But how would you slot the four “new” playoff teams into the real playoffs? If the semifinals involve all four Western Conference participants, which ones shift into the Eastern Conference bracket? And is that fair to the top two Eastern Conference seeds, which might end up facing better teams than the lucky duck no. 3 seed?

You could get around these issues by rejiggering the rules in any number of ways, but each rejiggering creates new ripple effects. And introducing concepts like this would have profound consequences on team-building strategies, to the point of upending a team’s short-term goals. Simply picking the 16 teams with the best records doesn’t quite work, in pure fairness terms, unless the league balances the schedule.

Finding the right fix is hard, but Step 1 is easy: Good-bye, silly divisions.