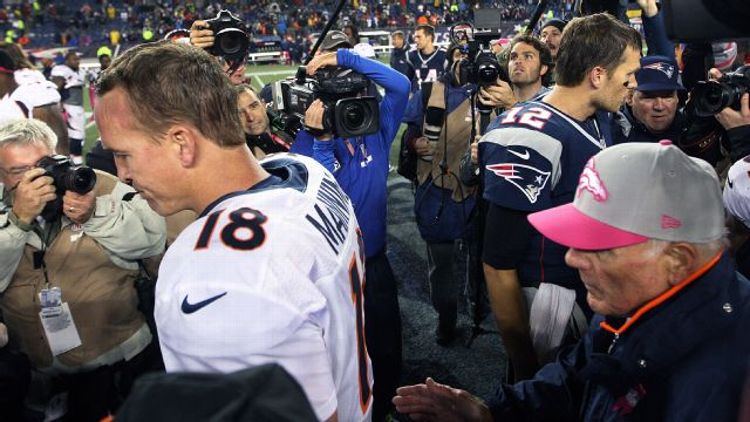 Who’s better, Tom Brady or Peyton Manning? That is probably a stupid question, but that won’t stop thousands of Americans from arguing about it over the next few days leading up to the big Broncos-Patriots game on Sunday night.

When it comes to “rings,” Brady is obviously ahead, but when it comes down to actually passing the football, the question is not so simple. These two quarterbacks are among the finest their sport has ever seen, but both have unique strengths and tendencies.

As both players approach the twilight of their careers, it is interesting to look at their overall passing patterns. I looked at all of their passes since 2006, mostly because the data isn’t really available before that — the analysis window ranges from 2006 until October 20, 2013, and includes 4,126 attempts for Brady and 4,085 for Manning. In this relatively recent window of time, they have combined to complete 5,316 of their 8,211 passes with 468 touchdowns and only 164 interceptions. 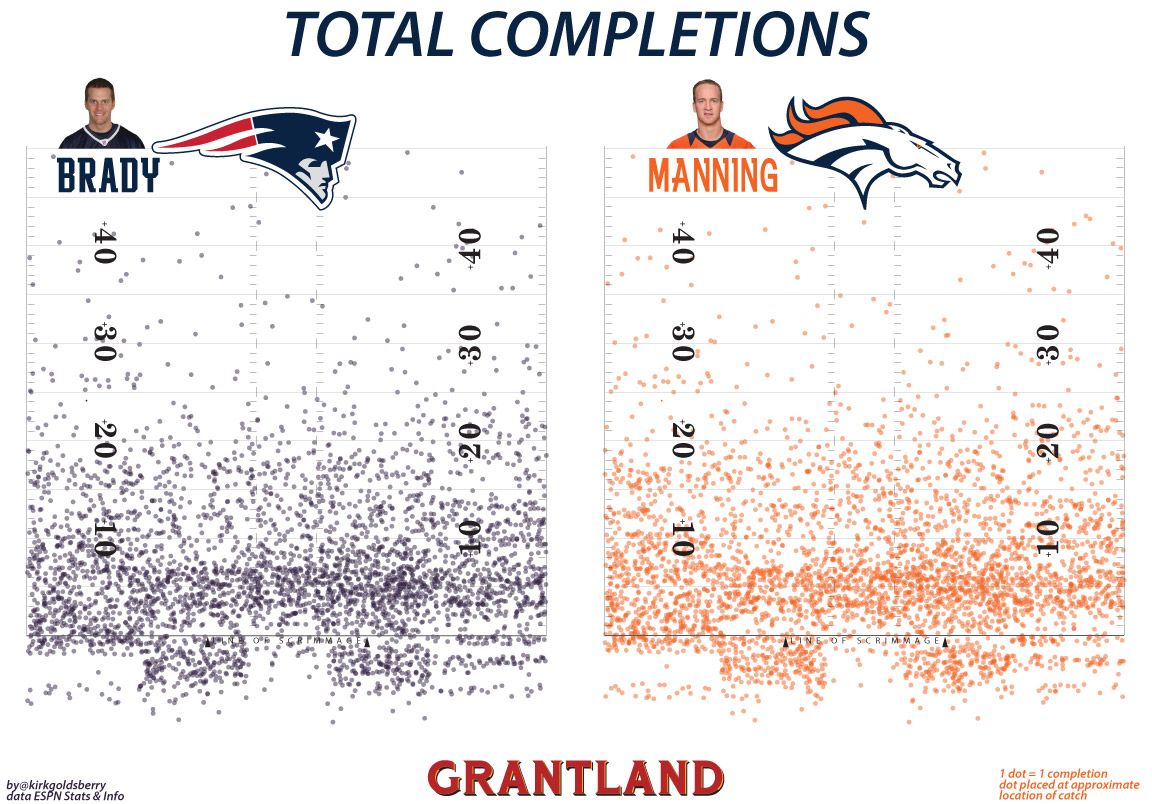 Thousands of dots don’t really tell us very much, but aggregating these completions by zones begins to reveal some key differences. The most striking contrast is perhaps Manning’s superior ability to throw the ball downfield. Relative to Brady, he has completed a lot more throws down the sideline, while also maintaining a much higher downfield completion percentage. 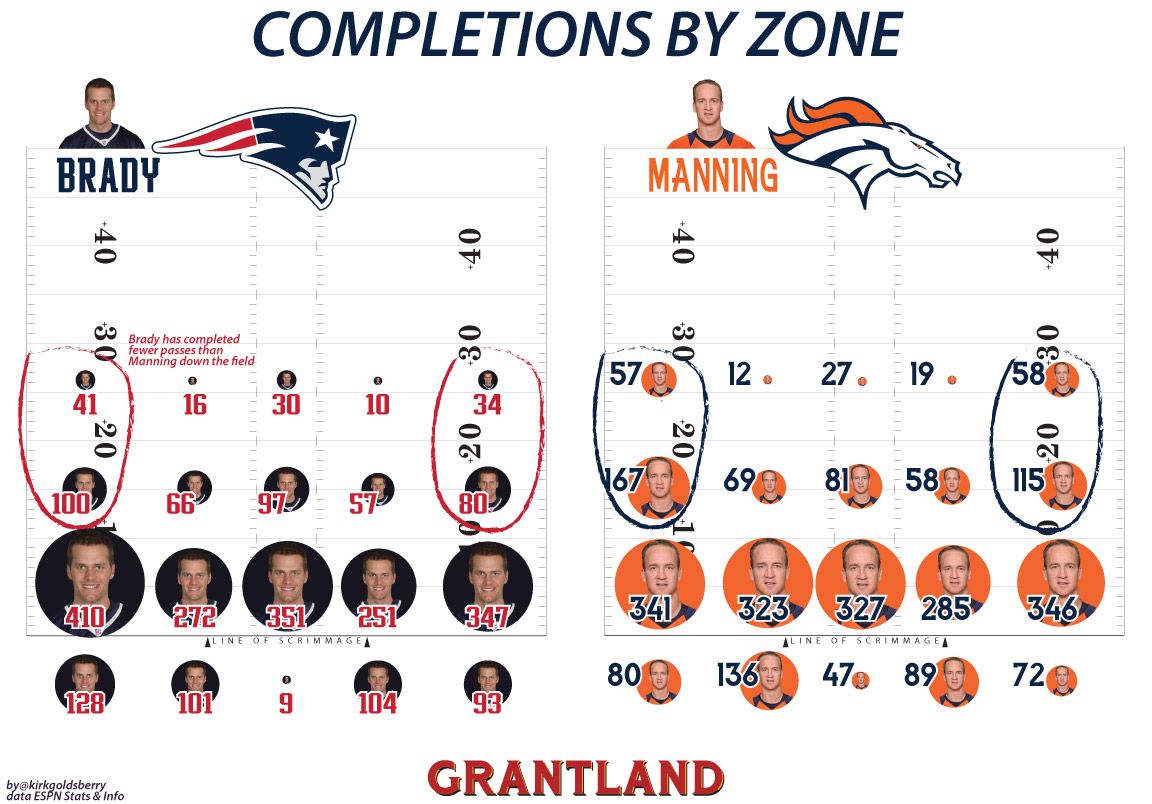 Brady, on the other hand, loves to throw short and has a distinct preference toward the left. Since 2006, Brady has completed 410 short passes toward that left sideline — the most of either quarterback in any zone. He has generated about 70 more completions than Manning in this area, and has been more prolific in all the shorter zones. In fact, a majority of his touchdown passes have been thrown to his left, while Manning exhibits the opposite tendency. 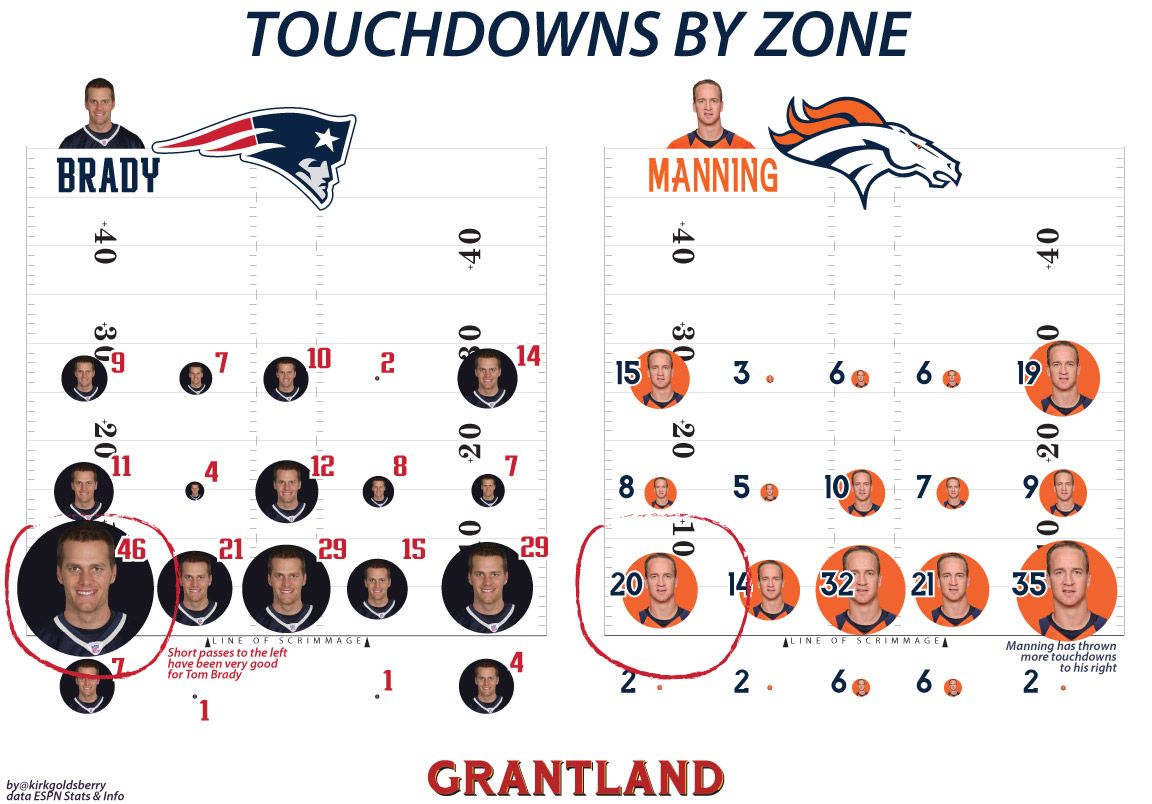 Generally, Manning has completed a higher share of his throws than Brady. 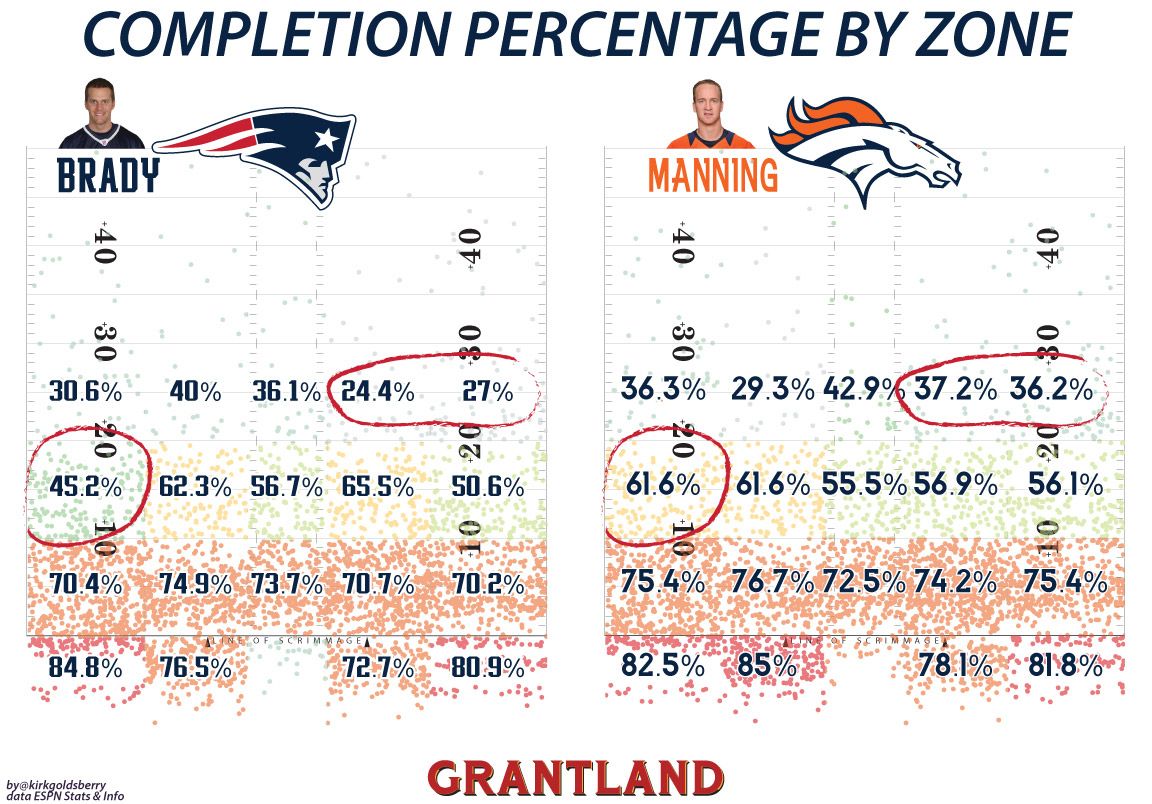 Although the differences in completion percentages are mostly minor, there are a few areas that jump out. In particular, on throws toward the left sideline beyond 10 yards, Manning has been much better than Brady, completing almost 62 percent of his throws to Brady’s 45 percent.

Similarly, as Patriots fans are well aware, Brady is not nearly as good going deep these days. Look at his throws down the right side of the field. Brady barely completes a quarter of his passes there. Still, a vast majority of NFL throws occur inside of 10 yards, and in that area, these guys put up almost identical numbers.

As a rule, both of these guys are wonderful to watch, but I do think it’s fair to claim that Manning is more efficient than Brady of late. As we all know, however, they don’t hand out rings for efficiency.

Dysfunction Junction: How Have the Cavs, Wizards, Knicks, and Nets Fared Since Their Players-Only Meetings?