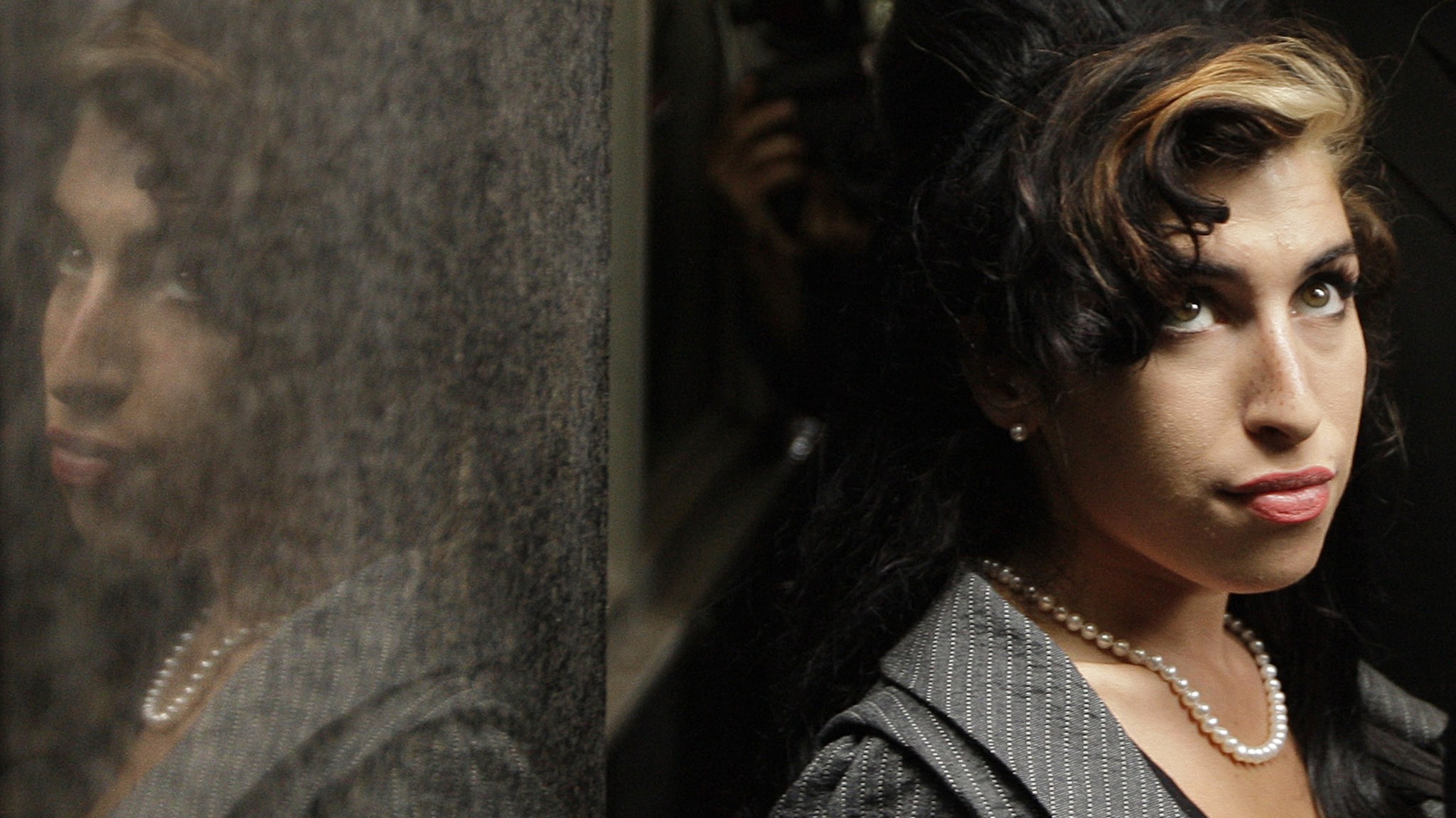 For the makers of Amy, the process of exploring the life, career, and tragic death of Amy Winehouse began with an unlikely first step.

“You begin by asking that very fundamental question,” the film’s editor, Chris King, said. “Who is this person?”

“Who is Amy Winehouse?” has a less obvious answer than it appears. Winehouse, like all of us, was many different people simultaneously. But her famous self overshadowed the others, and Winehouse’s fame hasn’t been diluted by her death, which occurred four years ago this month. Her 2003 debut, Frank, made her a star in her home country of England, but it’s her second LP, 2006’s Back to Black, an all-time breakup masterpiece that ached like Joni and swaggered like Wu-Tang, that cinched Winehouse’s pop immortality. An incisive songwriter and a singularly transfixing singer, Winehouse also had an outsize personality that swiftly crowded out the artistry.

Not since Britney Spears strutted in a schoolgirl outfit in the video for “… Baby One More Time” had a singer exploded in the American consciousness with a more fully formed persona. In retrospect, it’s more than a little cartoonish — the disheveled beehive, the Pink Flamingos–style eyeliner, the zombie pallor, the gothy, funereal miniskirt. Winehouse came to resemble a walking amalgamation of Lana Del Rey’s Pinterest board. But prime-era Winehouse still pops like few of the pop stars who followed. Adele was built to last, but Winehouse burned brighter.

Like Spears, Winehouse somehow seemed both highly self-aware and shockingly not self-aware. Her breakout hit, “Rehab,” was a cry for help remixed as a prank call. Whenever Winehouse cackled, she coughed up blood. In terms of classic, old-world stardom — in which a person is so talented, charismatic, and dysfunctional that no amount of PR could ever sand off their rough, human edges — Winehouse stands alone among her generation. She is the most real and the most unreal. It’s like what Paul Newman says about Tom Cruise in The Color of Money: “I said you are a natural character. You’re an incredible flake.” Winehouse was an incredible, unbelievable, one-of-a-kind flake.

Amy director Asif Kapadia is only passingly interested in that Winehouse, however. Drawing from a deep well of archival footage, home movies, and (most queasily) paparazzi video, Amy reconstructs the arc of Winehouse’s short existence along familiar lines — we see her as a precocious child; as a young woman whose talent blossoms in the light of music-industry opportunity; as a reluctant pop star; as a wasted pop star; then just wasted; then, inevitably, gone too soon, at the curiously misbegotten age of 27.

But the portrait that ultimately emerges is somewhat unexpected — Winehouse is vulnerable, introverted. As early as 2004, she was telling reporters that it might be better if they just left her alone so she could create songs unfettered. Winehouse was thoughtful about what was happening to her — it appeared to actively frighten her — but she was helpless to stop it.

“Getting to the bottom of the real Amy did become the complete mission, really,” James Gay-Rees, the film’s producer, told me. Along with King, Gay-Rees worked with Kapadia on 2011’s Senna, a documentary about the Brazilian racing champion Ayrton Senna, another icon cut down in his prime. The difference with Amy was that many of those closest to Winehouse were initially reluctant to participate.

“We heard the phrase a lot: Leave her alone and let her rest in peace,” Gay-Rees said. “And, you know, I see where they were coming from entirely.”

The filmmakers interviewed more than 100 people, including Winehouse’s ex-husband, Blake Fielder-Civil; Winehouse’s first manager, Nick Shymansky; her closest childhood friends; even her father, Mitch Winehouse, who has since denounced Amy (a family spokesman claims the film “is both misleading and contains some basic untruths”). But before many of those people agreed to talk, there were hundreds of hours of video to comb through.

The process began in 2012 with “a big sweep of all the obvious stuff that’s out there in the public domain — broadcast material and loads of stuff from YouTube,” King explained. From there, they pieced together a rough outline of Winehouse’s life, locating benchmarks and establishing essential turning points.

A crucial breakthrough for Amy was convincing Shymansky that the film was a legitimate project and not an exploitative cash-in. What Shymansky had to offer was a good deal more valuable than what was in the public domain. It was one thing for the filmmakers to have access to several days’ worth of award shows, live performances, and news clips. That material might’ve been necessary for exposition, but it was also a little generic. Shymansky — who discovered Winehouse when she was 16 and managed her career through Frank — had video of a pre-fame Amy, “busking around tiny little clubs, playing for five or six people in some cases, but really, really loving it,” King said.

“It exposed us to an Amy that we didn’t know — somebody who was witty and funny and vivacious and full of laughs and intelligent and flirtatious and honest and, you know, really authentic,” he said. “So that’s the moment that we thought, This isn’t the person that anybody knows. Nobody knows this.”

Wooing Shymansky became a priority. When he finally agreed to visit the editing room, Shymansky noticed that the walls were covered in notes charting Winehouse’s life. “It was like going into a murder detective’s office,” he told the New York Times. Shymansky agreed to cooperate.

When I interviewed King, he similarly likened Amy to a “cold case” — an inquiry into “absolutely everything and going, ‘Really, why is all of this stuff happening?’” Befitting the guise of a steely-eyed, impartial police inspector, Kapadia, Gay-Rees, and King have all claimed to be only vaguely familiar with Winehouse before starting the film. They’re not mere fans, but rather investigators.

“You don’t bring any assumptions, and you don’t assume that your audience is going to have any knowledge of your subject, either,” King said. “And it’s then your responsibility to paint a picture of whoever this girl is.”

In the latter half of Amy, the film is almost too intimate, showing selfies that Winehouse took in 2009 that show her dangerously gaunt from drug and alcohol abuse and bulimia. While the filmmakers had no qualms about using paparazzi footage (“How are we going to put the audience into Amy’s shoes?” King reasoned), Gay-Rees admitted he thought twice about using the photos.

“My wife was like, ‘You just can’t put this in; it’s just too much, it’s just too hardcore,’” he said. “I remember relaying that to Asif, [asking], ‘Are we doing the right thing here?’ He said we’ve got to, because we’ve got to show people how bad it got. Because it’s crazy that it was allowed to get to this stage.”

Amy is not easy viewing. When it’s not delving into the particulars of Winehouse’s personal misery — her alcoholism, her eating disorder, her marriage to Fielder-Civil, who was the lecherous Bobby Brown to Winehouse’s doomed Whitney Houston — Amy is filling in the backstory on how she got there. Coming out the worst in Amy is Mitch Winehouse, a philanderer who divorced Amy’s mother when she was 9, sending his daughter into a tailspin of depression and acting out sexually. The film portrays Mitch — who reentered Amy’s life about the time of Frank — as an enabler who famously talked Winehouse out of going to rehab in 2005 and then fame-humped his way to his own reality show as his daughter struggled to stay clean during a healthy respite in St. Lucia.

But there’s plenty of blame for what happened to Winehouse to go around. There’s Winehouse’s management, which hustled her back on the road weeks before her death with little apparent regard for her wishes. There’s the media, which for years repurposed Winehouse’s health problems for cheap headlines and easy punch lines. And there are the people who laughed at the jokes and devoured the cruel Amy Winehouse clickbait — Amy is about us, too.

It’s difficult to talk about Amy without also bringing up Kurt Cobain: Montage of Heck. The parallels between Cobain and Winehouse are unmistakable — Back to Black was Winehouse’s Nevermind, while everything that happened after was her In Utero. Both films, perhaps unconsciously, draw from the conventions of the found-footage horror film: You start with a dead body, you gather the footage the victim left behind, and then you stitch together a narrative. The idea is to “solve” an enigma — all it takes is just the right flash of unearthed footage. But pop stars, like Blair Witches, tend to be elusive, eternally mysterious apparitions. We see Winehouse, but her essence transcends videotape.

Because this is a show business story, Amy also has a dash of Sunset Blvd. For Winehouse, the pool behind Norma Desmond’s house was Camden, where a statue now memorializes her. Early in Amy, when an impossibly fresh-faced 18-year-old Winehouse moves into her first flat in the north London neighborhood, she enthuses that her plan is to “write songs, play music loud, [and] smoke weed.” Nine years later, Winehouse is carried out of her luxury 2,500-square-foot Camden apartment by paramedics after she’s found dead from alcohol poisoning.

Throughout the torturous closing third of Amy, Winehouse is viewed through the crush of photographers chronicling her every misstep, their flashbulbs exploding like rounds from a firing squad. But as her corpse is lifted out of the Camden flat, she is filmed at a respectful distance, affording Winehouse a rare moment of grace. Funny how gentle people get with you once you’re dead.