Director’s Cut: ‘Bringing It All Back Home,’ by Tony Kornheiser 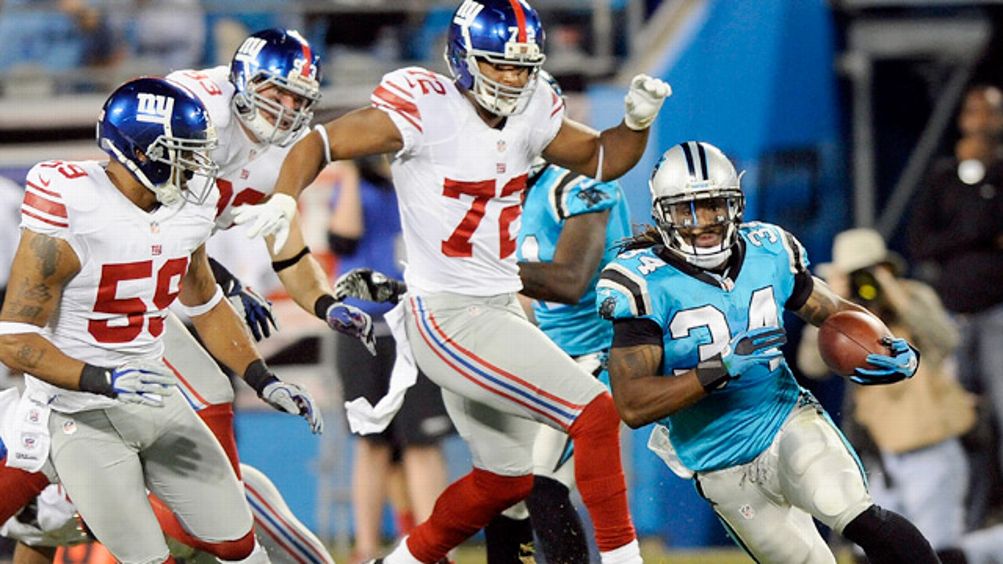 The Panthers team that came out on the business end of a 36-7 stomping by the Giants Thursday night has an author: Marty Hurney, Carolina’s general manager for the past 10 seasons. It’s easy to pile on a team and their architect after a blowout loss, but the nature of how the Panthers lost to the Giants and Hurney’s history over the past several years got me thinking about just how incredible Hurney’s continued employment is. His lengthy tenure in Carolina is a testament to the bizarre economics of the NFL and a reminder of just how different the goals of NFL fans and NFL general managers actually are. The top priority for most NFL fans is to see their team win a Super Bowl, preferably as quickly as possible. The top priority for most NFL general managers is to hold on to their seat at the GM’s table. Virtually all of Hurney’s recent decisions point toward the latter being his primary motivation, and it’s going to cost Carolina their shot at making a significant leap forward until he leaves.

By all accounts, it’s a surprise that Hurney’s still on the job. The 2-14 season that the Panthers endured during the 2010 campaign should have been enough to get the moving companies working overtime at team headquarters. It did signal the end of head coach John Fox’s tenure with the team, one that began with Hurney in 2002, but Hurney quietly signed a contract extension that offseason.

That year came with an unfamiliar offensive formation, one in which the team’s most expensive player lined up about 500 miles to the north. To try to squeeze out a bit of cap space for the 2009 season, the Panthers gave embattled quarterback Jake Delhomme — who had just thrown five interceptions in a playoff loss to the Cardinals — a five-year contract extension that reduced his cap figure for that upcoming 2009 campaign. In return, the Panthers were forced to give Delhomme a $12.7 million guaranteed salary for the 2010 campaign, without any terms that would offset that guarantee if the Panthers chose to release Delhomme and the quarterback signed elsewhere. As it turned out, that’s exactly what happened; when the Browns mysteriously gave Delhomme a $7 million deal for the 2010 campaign, Delhomme somehow pocketed $20 million to be one of the league’s worst quarterbacks. Maybe his agent should have become general manager.

Beyond Delhomme, though, the team was seriously flawed. Hurney had repeatedly dealt future first-round picks to try to move up in the existing year’s draft, a move that ended up with Hurney trading his 2010 first-round pick to the 49ers for the chance to take the legendary Everette Brown with the 43rd pick of the second round in 2009.1 Brown lasted two years before being released. Without a first-round pick in the 2010 draft or cap space because of the Delhomme deal gone wrong, Hurney needed to find contributors in the 2010 draft. Instead, he missed wildly. The team took Jimmy Clausen with the 48th pick and ran him out as the starter far too early, and followed that move with a series of mis-drafts at receiver, perpetuating Hurney’s annual effort to try to find someone to play across from Steve Smith. They drafted Brandon LaFell and Armanti Edwards in the third round when the likes of Emmanuel Sanders, Eric Decker, Jimmy Graham, and Aaron Hernandez were available.

Fortunately, while he did deal his 2011 second-round pick to the Patriots for the right to draft Edwards,2 Hurney wasn’t able to get rid of the first-round pick that ended up becoming the first overall selection in last year’s draft. While the Panthers were lucky to have Cam Newton fall into their lap, Hurney’s draft has otherwise produced mixed results. He used a pair of third-round picks on defensive tackles Terrell McClain and Sione Fua. McClain, the first pick of the third round, was cut after one year; Fua is a backup behind the guys who got run over by Andre Brown last night.

As bad as all that was, though, Hurney’s true disaster came through re-signing the talent at the core of that 2-14 team. That’s part of the benefit of hiring a new general manager when you go 2-14; you get a fresh set of eyes that isn’t emotionally committed to the talent currently on the roster in the same way that a GM who scouted and drafted that talent is. General managers occasionally overpay a homegrown player under the logic that they know him better than the marketplace, but the Panthers took that to a new level. Over several weeks last summer, Hurney handed out eight contract extensions to starters on that 2-14 Panthers team, including two that set records for players at their particular positions. Of those eight, one was defensible (the record-setting deal given to center Ryan Kalil) and two represented merely mediocre value (those of James Anderson and Charles Godfrey). The other five were, to borrow a term from Jonah Keri, crizazzlebeans. They seemed ill-advised at the time and, in most cases, look dramatically worse a year later. Those deals included:

As a result of all that largesse, the 6-10 Panthers entered this offseason nearly $10 million over the cap and unable to make any sort of foray into free agency. Holes at wide receiver and defensive tackle and depth issues on the offensive line and in the secondary weren’t properly addressed, forcing the Panthers to bring in borderline rotation guys from other teams like Dwan Edwards and Haruki Nakamura to start. When the injuries inevitably show up, the players behind them are even weaker.

That was the biggest difference between the Panthers and Giants last night. Giants general manager Jerry Reese is one of the best-drafting general managers in all of football, and you saw that in the players who were making plays. Brown had been cut and bounced around the league after his Achilles injury, but the Giants originally drafted him in the fourth round of the 2009 draft. Ramses Barden hadn’t made an impact before Thursday, but he was a third-round pick that same year. Victor Cruz was an undrafted free agent nabbed by the team for the minimum. That’s depth the Panthers can only dream of. One of the ways Reese accomplishes that is by holding on to his draft picks. Instead of sacrificing future picks to try to get that “must-have” player today, Reese gives himself as many lottery tickets as possible. The Giants have drafted at least one player in each of the first four rounds since the Eli Manning trade finished up. Reese manages his team like somebody who expects to be there in five years. Hurney runs the Panthers like he expects to be retired in five years.

Because Hurney signed all those players to big contracts, though, he became an essential part of this iteration of the rebuilding project in Carolina. Why fire Hurney now? His team deserves a shot to prove that it’s good, right? And what would be the benefit to firing Hurney now, anyway? If the Panthers fired Hurney after last season, they would have had to pay him the leftover money on his contract while hiring someone new to play the same role. That new GM would have inherited a 6-10 team with no cap flexibility that just spent tens of millions of actual cash, which means that nobody in their right mind would have wanted the job. Hurney made himself essential by blaming his problems on Fox and improving an inessential team to adequacy — and even that’s up for debate. The average two-win NFL team wins an average of 3.1 games the following year, meaning that the Panthers only outperformed that expectation by 0.9 wins. And the average 2-14 team doesn’t spend themselves into a stupor to get out of the gutter.

The guy who bankrolled all of these moves — the same person who has kept Hurney employed for a full decade now — is Panthers owner Jerry Richardson. Richardson is a former player held in high regard among his fellow owners around the league, but remember that he’s the same guy who reportedly dismissed the likes of Drew Brees and Peyton Manning during the lockout negotiations by insulting their intelligence and asking them if they knew how to read the revenue chart. It seems ironic that an owner who doesn’t trust the players to understand basic economics has entrusted his team to a general manager who doesn’t seem to have a strong grasp on it, either.