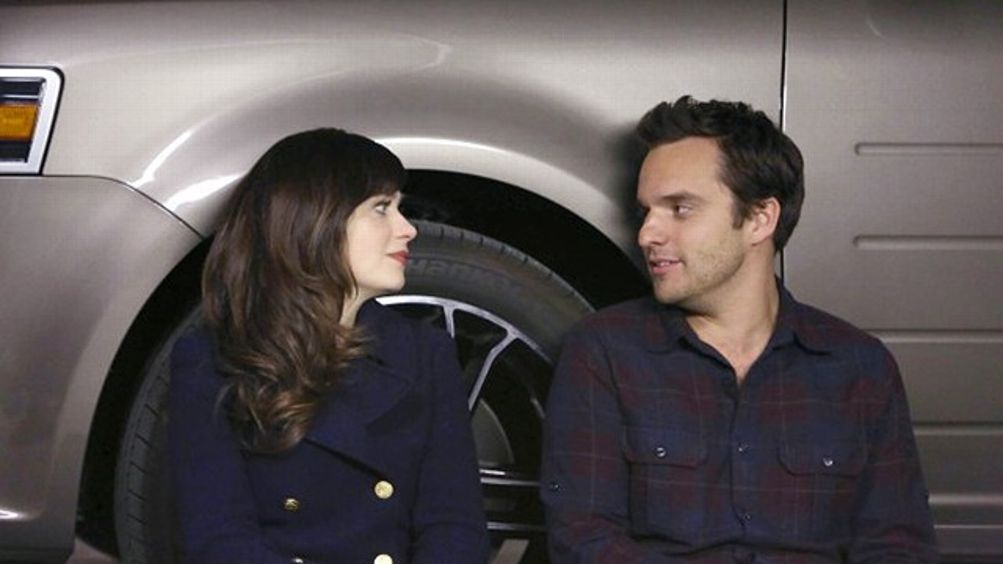 Who says romance is dead? Anyone who’s been watching prestige dramas for the last decade, that’s who. The swaggering brontosaurii of cable love lots of things — power, money, sex, themselves — but they rarely extend the courtesy to other human beings. Awash in the high-stakes business of life and meth, antiheroes like Walter White have plenty of time to indulge in humanity’s greatest vices, but practically none at all for its pleasures and joys. Years of rewarding storytelling extremes have left us with a slate of bold, uncompromising shows that, collectively, are about as romantic as a roadside Arby’s at 4 a.m. It’s a landscape where wives are shrewish scolds and young ingenues end up in the morgue or worse: married to Pete Campbell. On The Walking Dead, hearts get eaten, not broken. There’s likely to be a very special Valentine’s Day episode of Boardwalk Empire next season, but it won’t end the way you think. And Homeland producers can stamp their feet forever about how Carrie and Brody are a “great love story,” but come on! Their intimate encounter by a roaring fire last season was creepy, not tender; watching them French was like being waterboarded with Veuve Clicquot.

Look, I’m not trying to retcon a whole bunch of Nancy Meyers copper pots into the Sopranos kitchen. The very best television shows can tell all kinds of stories, no matter their framework.1 But I do think it’s a tragedy that romance has been pushed to the margins of hour-long entertainment, either ground up as ‘shipping fodder for the ABC network’s relationship industrial complex or left to flirt prettily but stupidly among the teenagers and other emotional vampires on the CW. And words like “adult” and “quality” can be just as limiting as the word “soap”; the last time HBO tried a drama that didn’t feature lethal weapons,2 the result was Tell Me You Love Me, a numbing hour about terrible people hate-fucking each other into boredom or the other way around.3 Explicit sex can be a wonderful thing, but too often it comes with strings attached — or werewolves or broadswords. Under this model, where hard or punishing are easy substitutes for good,4 we’d never have gotten complicated-yet-loving couples like Coach and Tami on Friday Night Lights, Sipowicz and Sylvia on NYPD Blue, or nearly any of the grown-ups on shows made by Ed Zwick and Marshall Herskovitz like thirtysomething and Once and Again. It’s telling that the duo haven’t had a show on the air in half a decade. There’s little room for their warts-and-all optimism at a moment when networks seem more interested in blood than in the heart that pumps it.

Thankfully there is at least one serious outlet for romance on television in 2013: sitcoms. Freed from the grim, heavy shackles of prestige intensity,5 network comedies — once the banal resting place for canned laughter and cornier gags — have become the most reliable repository for all the wonderfully strange private jokes and bursts of soul-destroying embarrassment that define real-world relationships. Sitcoms these days are much less afraid of going dark than their dramatic counterparts are of letting in a little light. And I know which extreme speaks more clearly to my experience. When Ben Wyatt proposed to Leslie Knope last year it was the sweetest, most romantic thing I’d seen on television in years — and it was precisely because I’d seen them dress as Batman, fall in garbage, and argue passionately over the death of a tiny, extremely charismatic horse. As they put it to each other: “I love you and I like you.”

Not that this is necessarily new. Harnessing — or, in desperate cases, stoking — sparks between actors in search of more story has been a recourse for harried comedy writers for decades. But it has only increased in the age of serialization when, for the first time, characters weren’t reset to zero at the end of every half-hour. Slowly but surely, on-screen relationships were allowed to develop at roughly the same pace as those off of it. And, when you think about it, gradually learning to see people — even made-up people — as something more than an assortment of zany ticks and spit takes (or even in spite of their zany ticks and spit takes) isn’t a terrible working definition of falling in love.

It also — like most sweet things — can be a trap. Depending on your generational allegiance, you might refer to it as the Sam-and-Diane or the Ross-and-Rachel. (If you’re super kinky and/or hungry, you might call it the Two Guys, a Girl and a Pizza Place.) It’s what happens when the exhilarating frisson of a will-they-or-won’t-they couple threatens to devour the entire host. Indulging in ratings-goosing, flirty shenanigans for a time makes sense, but eventually it can become a burden. Because, in the hands of lesser showrunners, consummation can bring the good times crashing to a halt.6 Despite wonderful examples to the contrary — Happy Endings‘s psychotic, sex-positive union of Brad and Jane being just the most recent — there’s still a real fear that marriage equals the end of the world, or at least the end of any forward momentum.

The thing is, pushing characters together is a reliable engine for story, but not necessarily good story. As with the French Revolution, it’s all about execution. The smartest comedies have managed to realize this by embracing, not running from, their romantic inevitabilities. Until its recent, ill-advised boom mic explosion, The Office stood out for its gentle development of Jim and Pam’s affection and then, when it was time, its quiet dedication to their marriage. The happy accident of April and Andy on Parks and Recreation is proof that committing to a good thing can pay off in surprising ways. It’s worth remembering that Moonlighting didn’t end because Maddie and Dave kissed, it ended because the kiss came too late and the writing got too lousy.

No show on the air is testing the limits of this hypothesis more aggressively than New Girl. In its second season, the Fox series quickly shed its niche adorkability and became the most consistently enjoyable thing on television, mostly thanks to the chemistry — platonic and otherwise — between its flawless cast. But credit also goes to its proudly messy, big-picture view of 21st-century romance. Creator Liz Meriwether isn’t sappy — the working title for the show was, after all, Chicks and Dicks — but nor is she cynical. Intimacy for the roommates is no longer icky — Zooey Deschanel’s Jess now seems perfectly capable of not only saying the word “penis” but also actively pursuing one — it’s inevitable. They share a unisex bathroom, hear Schmidt’s war cries through the walls, brush up against Winston’s boner in the kitchen. Even so, the decision two weeks ago to have Jess make out with Jake Johnson’s Nick was a shock. The show had done such a uniquely successful job of imbuing nearly everything, from absinthe to unfertilized eggs, with the zippy charge of romantic possibility; it struck me as shortsighted to indulge the wishes of a thousand Tumbloggers so soon.

But the very early going suggests I was wrong. Any show can tease a question, but only a brave one will risk everything to supply an answer — particularly in a low-rated era in which a successful sitcom may only get five years, not 10. The kiss, and its awkward, Indian aftermath, has brought out the very best in Deschanel and Johnson, performers wonderfully incapable of hiding their needy humanity behind layers of comic snark. Seeing the two twist themselves into increasingly awkward pretzels of denial and semi-requited longing is a necessary corrective to a generation of lousy rom-coms7 that have tried to sell the perfect kiss as the end of the story, not the beginning. The future of Nick and Jess is literally unwritten, the stutter steps and fuck-ups to come a thousand times more interesting than untold seasons of gerrymandered denial or a sudden, easy bliss. The traditional, cinematic happy ending tells us that love means never having to say you’re sorry. New Girl quite hilariously suggests that real love — honest, messy, stubbly, cantaloupe-crushing love — means barely saying anything else. 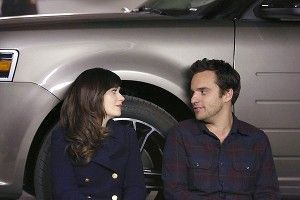 I can’t imagine anyone having a stronger opinion about all of this than Mindy Kaling, whose Ephron-esque sitcom conveniently airs after New Girl every Tuesday night. Kaling’s entire comic persona feeds off of rom-com orthodoxy like yeast devours sugar: breaking down the essential structures and puffing herself up in the process. The brilliance of The Mindy Project‘s pilot was that it suggested a third way for romantic comedy on television: not slowing it down, as Friends had once done, or flipping it, à la New Girl, but rather standing apart from it, alternating between envy and disgust. The series was set in motion not by the perfect kiss or the meet-cute but rather the total, insurmountable collapse of both of those things, the humor rising from the violent collision between what we were promised and what we actually get. At its best — such as last week’s “Harry & Mindy” — The Mindy Project is an irresistible comedy about the girl who always imagined herself as Meg Ryan suddenly realizing, to her own shock and horror, that she’s actually Joan Cusack.

Still, despite early critical adulation, The Mindy Project, like Kaling’s on-screen persona, Dr. Lahiri, is still very much a work in progress. And, to her credit, Kaling knows it: There have been multiple cast reshuffles and a critical infusion of new writing blood in the form of some recently available 30 Rock staffers, all of which suggest a steadier future. But it’s still worth noting the very best episodes of the show are the ones that have strayed the farthest from its own convention: the week Mindy crashed a high school, or went on an ill-fated double date. It’s hard to shake the feeling that the trappings of a standard workplace sitcom — the dopey receptionist, the dunderheaded nurse — are just as much of an ill-fitting burden to Kaling as the myths perpetuated by, in Dr. Danny Castellano’s words, “some dumb movie with Tom Hanks where he’s hugging in the rain and there’s no umbrellas.”

The great promise of The Mindy Project is also its greatest challenge: to be a weekly show about romance, not merely a romantic show. Of all the midseason tweaks made thus far, the most successful is the sly shift of the dynamic between Kaling’s Dr. Lahiri and the excellent Chris Messina’s Dr. Castellano. Clearly imagined as the show’s answer to Sam and Diane, the two now function best as simpatico fellow travelers lost in their own fantasies: hers involving the Empire State Building, his involving some scalped Springsteen tickets and unlimited cold cuts. Both are attractive, successful, and totally clueless about love. “You don’t know what’s going to be romantic ahead of time,” Danny said to Mindy last week after they were both dumped and it was just the two of them: a guy and a girl in a pizza place. It’s heartening to know that they — and the show itself — will keep trying to figure it out until they finally get it right.