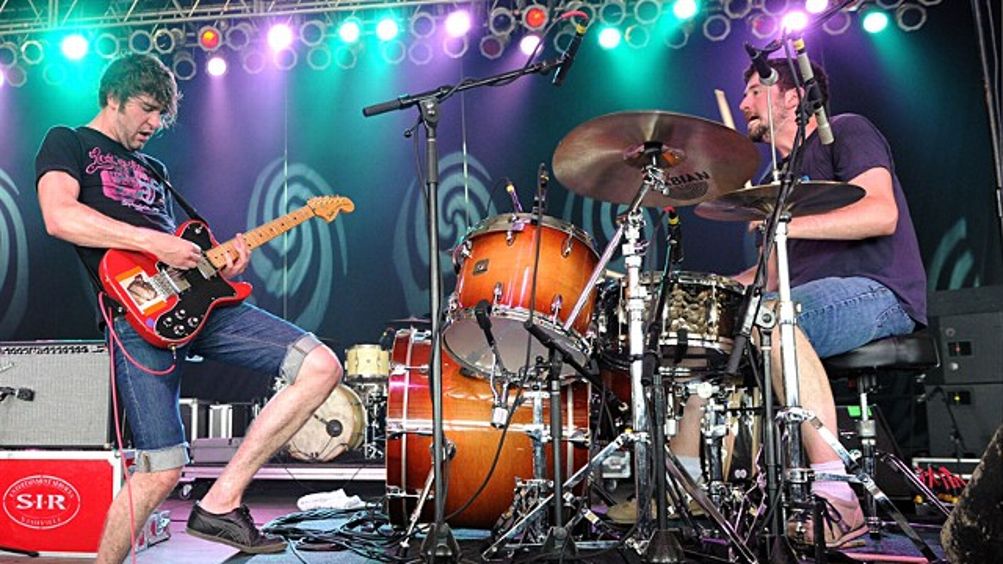 Any list of canonical rock films inevitably unfolds in a neat, predictable, and very un-rock fashion. You must have Gimme Shelter and The Last Waltz at the top. Stop Making Sense, Don’t Look Back, and Woodstock likely trail closely behind. Then there’s Purple Rain (because nobody cares about the non-performance scenes), The Decline of Western Civilization Part II: The Metal Years (because the ’80s Sunset Strip metal scene will never not be funny and/or tragic), and Beats, Rhymes & Life: The Travels of A Tribe Called Quest (because acknowledging the last two decades of pop culture is a good idea).

In the parking lot outside of the rock-film canon, where it stands in a sweat-stained Rush 2112 crop-top and cut-off jean shorts, is 1979’s Over the Edge. There are no actual rock stars in Over the Edge, nor is there a scene where the Hells Angels stab Robbie Robertson with one of Chris Holmes’s busted vodka bottles so that Phife Dawg can stop feeling sorry for himself. What Over the Edge does have is juvenile delinquents who shoot BB guns at cop cars, down enough booze to satisfy Metallica’s mid-’80s tour rider, and listen to lots and lots of Cheap Trick. (It also boasts a remarkable display of naturalistic brooding by a 14-year-old Matt Dillon, who plays a sort-of hybrid of Dee Dee Ramone and Tom Joad.) Over the Edge represents a period in our nation’s history when sticking “Surrender” in the soundtrack of your movie was intended to suggest danger and rebellion, not radio-staple reassurance. It signifies what rock music once stood for in American culture: youth, and the rush of backseat sex and basement drug abuse that’s supposed to go along with it.

The songs on Celebration Rock, the new album by Vancouver indie duo Japandroids, take place in the same world Over the Edge inhabits. Singer-guitarist Brian King also likes to stay out all night, every night, and drink past the point of oblivion to where misbehavior starts to feel revolutionary. His lyrics are written in sharp lines separating stark, broadly rendered contrasts: darkness and light, good and evil, young and old. He sings about hitchhiking to hell and back, loving “with a legendary fire,” and mooning over “wild and free” girls. Every emotion urgently bounding out of Celebration Rock stems from a life-and-death struggle against boredom, virginity, and the slow crush of time. And how exactly do King and drummer David Prowse convey this musically? They play raise-your-hands, point-to-the-heavens, scream-whoa-oh-oh with your bro-oh-ohs rock and roll. What Jack Black treats as a joke these guys preach as gospel.

Let me state for the record: I love Celebration Rock. I love it so much that I’m skeptical about the precision with which it pushes my buttons. Japandroids are taking a mighty lunge at the pantheon of great rock records here. Celebration Rock addresses the teenage wasteland with the bombastic mix of fury and empathy that derives from Who’s Next. It traffics in the same streetwise rock-patter drivel (ahem, “when the plunder of the poets, thunder of a punk’s guitar / beat life to my body sulking drunk at the back of a bar”) originating from Born to Run. It has the drunkard’s sentimentality of the Replacements’ Let It Be, and the tour-weary determinism of Appetite for Destruction. It’s a beefy, pop-conscious punk record in the mold of Nevermind, and it’s destined to become, like White Blood Cells, an important battle in the never-ending war to end bass playing as we know it.

My skepticism is partly rooted in surprise. I first encountered Japandroids via the song “Wet Hair,” an endearingly clumsy splatter of vacuum-zoom guitar and nursery-rhyme lyrics about how Japandroids must get to France to French-kiss some French girls. “Wet Hair” appears on Japandroids’ full-length 2009 debut, Post-Nothing, which the band intended as its final release after two EPs came and went without making an impact outside of Canada. But against all odds Post-Nothing caught on with tastemakers, and Japandroids spent the next two years on the road instead of breaking up.

When I saw Japandroids in 2010 playing on a tiny stage behind an art gallery in Austin during South by Southwest, I was sucked into the vortex of their ping-pong energy and gleefully limited musicianship. But I can’t say I thought I was witnessing greatness. They seemed like a better-than-average indie band that might squeeze out another record that wasn’t as good as Post-Nothing and then reappear in 2022 as part of the third wave of ’10s rock reunion tours, perhaps in a package with Cold War Kids and Avi Buffalo.

And now along comes Celebration Rock, and it’s like Japandroids went down to the crossroads and came back offering up The Bends as the follow-up to Pablo Honey. Sessions for Celebration Rock were reportedly difficult and plagued by writer’s block, which pushed the official gap since Post-Nothing to a near-disastrous three years. But King and Prowse have clearly done their rock homework in that time, evidenced by interviews dotted by trenchant comments about how the mythologies of the Replacements and Guns N’ Roses are two sides of the same whole. (Even before Tommy Stinson made it literally the case.)

But if Japandroids know their stuff as well as they seem to, they must be aware of a reality even non-rock junkies can plainly see: Rock music and youth culture haven’t been linked since grunge’s twilight. Where Matt Dillon once stayed out late on school nights, taunting the pigs and playing air guitar to Kiss’s Alive!, he now appears as a guest star on ABC’s hump-day bedrock, Modern Family. Modern-day rock no longer conjures visions of kids running loose in the streets; it suggests a time when that used to be true, in the collective imagination anyway. By association, Celebration Rock gives lip service to the kids while actually observing adolescence from a distant, less celebratory time. It’s a survey of a world that no longer exists.

“Remember when we had them all on the run / and the night that we saw the midnight sun,” King sings in “Younger Us,” a terrific single from 2010 that’s been recast as the centerpiece song on Celebration Rock. “Remember saying things like we’ll sleep when we’re dead / and thinking this feeling was never going to end / remember that night you were already in bed / said fuck it, and got up to drink with me instead.” Do I remember? How can I forget? This is exactly the kind of shit that I revert to talking about whenever I run into someone from high school.

Celebration Rock‘s first song, “The Nights of Wine and Roses,” is a call to arms in the tradition of “Thunder Road” or “I Will Dare,” a drinking song about having a good time until real life finally presents a better option. But Springsteen and Westerberg were dreaming of exciting futures from the vantage point of their mid-20s when they wrote their respective songs. They were looking ahead, not back. King and Prowse are both 29, and “we down our drinks in a funnel of friends / and we burn our blends right down to the ends” hardly sounds like the perspective of two dudes facing down 30. That’s around the time that you realize that this feeling is going to end, because it probably already has.

Some of the best “big” rock records of recent years similarly dwell in the ghost world of rock’s wild and youthful past. In Arcade Fire’s 2010 concept album The Suburbs, rock and its many subgenres provide a set of costumes and attitudes that divide youth culture into different cliques. In Fucked Up’s 2011 rock opera David Comes to Life, the early days of late-’70s English punk serves as the backdrop for a transformative love story. Two of 2012’s best rock albums, Cloud Nothings’ Attack on Memory and Screaming Females’ Ugly, are sonically sludgy postcards from 1992, the last time rock bands were a go-to cultural signifier of disgruntled teenagerdom. Perhaps this is what rock music does for us now. It doesn’t kick off parties anymore. It tells us the party is over.

I don’t wanna worry about dying / I just wanna worry about those sunshine girls,” King and Prowse yelp in one of my favorite Japandroids songs, “Young Hearts Spark Fire,” from Post-Nothing. For The Beach Boys — who this week released That’s Why God Made the Radio, their first new album of original material in 20 years — this sentiment exemplifies a more pressing reality. In a recent Newsweek profile about the group’s 50th-anniversary reunion tour, we spy a ramshackle Beach Boys rehearsal where nobody knows the new single nor can hit the notes nor figure out which clicker works the DVR. This business is finally interrupted by news of Dick Clark’s passing. Brian Wilson — the most important, most talented, and most broken of all the surviving Beach Boys — unsurprisingly takes the news the hardest. “We’re 70 fucking years old,” he says. “I’ll be 70 in June. I’m worried about being 70.”

The ghost world is a fine place to visit, but you don’t want to live there. But don’t tell that to The Beach Boys, who have been residents longer than most. And on Radio, there are plenty of calls to “be back again / where the good times never end.” The title track is straight out of The Beach Boys’ Jesse and the Rippers period, but it’s pretty catchy so long as you ignore the lyrics. (They call rock and roll “the soundtrack for falling in love,” like a Time Life commercial.) Elsewhere, there are copious references to the beach, surfin’, and “pretty babies.” Also, Kevin Love’s elderly uncle asks whether it’s “time we went steady again?” The Beach Boys don’t wanna worry about dying. They just wanna worry about sunshine girls. Only problem is, all you can think is that they’re 70 fucking years old.

That’s Why God Made the Radio is actually better than it ought to be considering (based on that Newsweek story) nobody seemed terribly invested in making it. (Brian Wilson is also still insane. Actual quote from the Newsweek story: “Wilson woke up with a black eye that he couldn’t remember receiving, then got his shoelaces caught in an escalator and ‘fell flat on his face.'” The man who wrote “God Only Knows,” ladies and gentlemen!) The saddest, prettiest parts of Radio recall the commercially barren Beach Men period of the early ’70s, when bad drugs, bad strokes of luck, and bad vibes (they rolled with Charlie Manson, after all) resulted in some exquisitely beautiful bummer summer albums. “We live then die / and dream about our yesterday,” Wilson sings in “Summer’s Gone,” the last part of a lovely trilogy of forlorn, sunsets-as-a-metaphor-for-death songs that close the record. (It was co-written by Jon Bon Jovi, now generously helping others go out in a blaze of glory.)

Celebration Rock also ends on a low, relatively subdued note, turning down the lights and squeezing in tight for one last, long dance at the prom to “Continuous Thunder.” As the guitars flail in slow motion and the drums pound out an elegiac march, Japandroids amp up the melodrama: Two lovers embrace in “the cold, pissing rain,” and the music communicates a mix of excited nerves and pained ecstacy. The feeling won’t last — it didn’t last — but as long as the guitar plays, it lingers for a few stolen moments.