The Return of the Jets 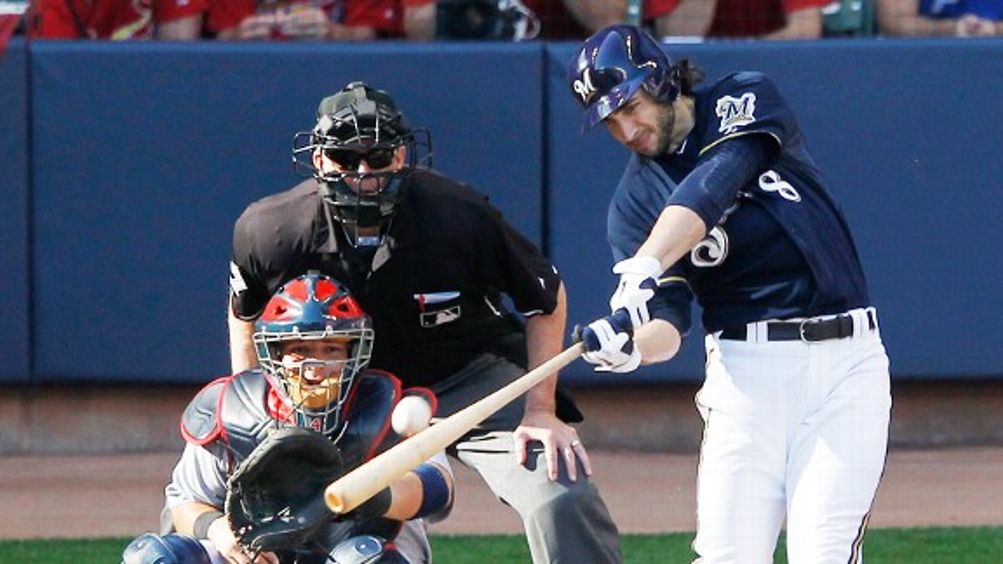 If you’ve watched any playoff baseball this season, you’ve heard MLB’s signature song, “Written in the Stars,” at least 371 times by now. (You will also now be hearing that song in your head for the rest of the day. My apologies.) When it comes to what happens on the field, the song almost has it right: Playoff baseball, for the most part, is written by the stars.

The regular season, a 162-game marathon played over six months, is a test of depth, endurance, and health. The postseason, by contrast, is a measure of talent. During the regular season, a team might have three off days a month and might play on 20 consecutive days. But in the playoffs, when teams are never scheduled to play more than three days in a row, the frequent rest makes depth almost irrelevant. You don’t need a fifth starter; nor do you need more than three or four good relievers. A quality backup catcher, a fourth outfielder, a utility infielder — these are luxuries you don’t need when you’re playing four or five games a week.

In the case of the 2011 Milwaukee Brewers, the stars are in the heart of the lineup. And the Brewers couldn’t be happier.

Ryan Braun and Prince Fielder aren’t exactly overnight sensations. Fielder came up as a rookie in 2006 and hit .271/.347/.483 with 28 homers; in 2007 he hit 50 home runs and finished third in the NL MVP vote. That same year Braun debuted in late May, and despite spending the first seven weeks of the season in the minors, he hit .324 with 34 homers. He won rookie of the year, not surprising given that he set the all-time rookie record with a .634 slugging average.

In recent years, Milwaukee’s problem was that Braun and Fielder couldn’t carry the team to the playoffs by themselves. When it comes to the regular season, the Brewers have been only as good as their pitching staff. They eked their way into the postseason in 2008, thanks largely to an insane performance from CC Sabathia, who was acquired in a trade-deadline deal. After Sabathia left for the Yankees, Milwaukee finished below .500 in both 2009 and 2010 despite ranking third and fourth in the league in runs scored. In 2009, they ranked next to last in runs allowed; in 2010 they improved one spot to 14th out of 16 teams.

That’s what last winter was about — fixing the pitching staff. The Brewers cashed in their entire farm system to acquire Shaun Marcum and Zack Greinke, two elite starters to go with the one they had in Yovani Gallardo. It was as ballsy a move as you’ll see in baseball today — if that gamble had failed, the Brewers would have been staring at a long and painful rebuilding process.

But it succeeded. Spectacularly. This season, the Brewers ranked a respectable sixth in the NL in runs allowed despite playing in a park that favors hitters. They won 96 games and took home the NL Central title for the first time. Having qualified for the postseason, it was time to ride the beefy shoulders of Braun and Fielder.

As consistently excellent as Braun and Fielder have been since joining the Brewers, this was probably their best year as a duo. Braun hit .332/.397/.597, leading the NL in slugging while setting a career high in walks (58) and a career low in strikeouts (93). He even stole 33 bases to go along with his 33 homers, becoming just the second 30/30 player in Brewers history. Fielder hit .299/.415/.566 with 38 homers without missing a single game. (In addition to their other virtues, Braun and Fielder have been remarkably durable throughout their careers. Braun has played in at least 150 games every season since his rookie year and Fielder has missed 13 games in the past six seasons combined.)

One of the generally accepted principles of sabermetrics is that hitters are more likely to peak at age 27 than any other time. Braun and Fielder are both 27.

Given the overall decline in offense throughout the majors this season — teams averaged 4.28 runs per game in 2011, the lowest since 1992 — Fielder’s and Braun’s numbers are even more impressive. Braun, in fact, led the NL in OPS (on-base average + slugging average) with a mark of .994, and Fielder finished third at .981, behind Braun and Matt Kemp.

It’s a testament to how much pitchers fear Fielder that despite leading the league in OPS, Braun — batting directly in front of Fielder all season — was walked intentionally only twice this year. And it’s a testament to how little opponents fear anyone else in the Brewers lineup that Fielder was intentionally walked 32 times, leading the majors. (It didn’t help that the Brewers’ no. 5 hitter for most of the season, Casey McGehee, hit .223/.280/.346. He was replaced by Jerry Hairston at third base for the playoffs.)

While many playoff teams have had great batters, it’s been a long time since we’ve seen a tandem as potent as Braun and Fielder. The last playoff team to feature two of the three best hitters in the league by OPS was the 1989 San Francisco Giants. The Giants, like the Brewers, had a left-handed-hitting first baseman (Will Clark, who hit .333/.407/.546) and a right-handed-hitting left fielder (Kevin Mitchell, who hit .291/.388/.635) who teamed up to terrorize the league.

As good as Mitchell and Clark were during the season — they finished 1-2 in the league’s MVP vote that year — they were even better in the NLCS. Against the Chicago Cubs, Mitchell hit .353 (6-for-17) with a pair of home runs. No one remembers his performance, however, because Clark had one of the most impressive playoff series of all time. The Thrill hit .650 (13-for-20) with three doubles, a triple, and two homers, one of them a grand slam off of Greg Maddux. In Game 5, with the Giants down 1-0 in the seventh inning, Clark tripled and Mitchell hit a sacrifice fly to tie the game; in the eighth, Clark batted with the bases loaded and two outs, and hit a two-run single that put the Giants into the World Series.

Braun and Fielder haven’t had quite that much impact so far in the postseason, but they’re close. In Game 1 of the NLDS against the Diamondbacks, Braun scored the first run of the game, and he was on second base in the seventh inning when Fielder clubbed a two-run homer to give Milwaukee a 4-0 lead. In Game 2, Braun opened the scoring with a two-run homer in the first; then, in the third inning, Braun doubled with two out, Fielder singled him home, and Fielder eventually scored on a triple by Rickie Weeks to make it 4-1. Later, Braun capped off a five-run rally in the sixth inning with an RBI single.

The Diamondbacks won Games 3 and 4 to force a deciding Game 5 on Friday night. With the game tied at one in the sixth, Braun led off with a double, Fielder walked, and a single by Yuniesky Betancourt allowed Braun to score the go-ahead run. The Diamondbacks tied the game in the top of the ninth, but the Brewers won in the bottom of the 10th on Nyjer Morgan’s walk-off single — with Braun looming on deck.

Sunday, it was more of the same from the Brewers’ two-man wrecking crew. After the Cardinals scored a run in the top of the first, Braun came up with a man aboard in the bottom of the inning and hit a home run so mammoth (it was measured at 463 feet) that the left fielder just turned around to watch.

Even so, Milwaukee found itself in a 5-2 hole after Greinke gave up a three-run homer in the fourth and an RBI single to Lance Berkman in the fifth. But Corey Hart singled to lead off the bottom of the inning, then Jerry Hairston doubled, and faster than you can say “Wonder Twin Powers Activate!” the Brewers had the lead again. On the first pitch of his at-bat, Braun hit a ground-rule double to right field that drove Hart and Hairston home. On the next pitch, Fielder belted a blast to right that traveled only 423 feet. The ball was measured leaving Fielder’s bat at faster than 119 mph, the highest exit velocity of any homer hit this season. The Brewers had the lead again and would hold on to win, 9-6.

Braun and Fielder’s heroics are helping to cover up their teammates’ shortcomings. Greinke, in particular, has been a disappointment in the playoffs. He couldn’t hold on to a three-run lead against the Diamondbacks in Game 2, and yesterday he gave up six earned runs in six innings. And yet the Brewers won both games, as they have won every single game that Greinke has started at Miller Park this season — 17 and counting. No pitcher had ever won a postseason start having allowed so many earned runs in so few innings.

It remains to be seen how far Braun and Fielder can take the Brewers. The Cardinals, after all, have their own wrecking crew in the middle of the lineup, and theirs goes three deep. Lance Berkman finished fourth in the NL in OPS, Matt Holliday finished seventh, and Albert Pujols — suffering through the worst season of his career — still finished 10th. Ultimately, this series may come down to whose pitching staff can do a better job of neutralizing — or at least containing — the stars in the other team’s lineup.

Last night, Braun and Fielder continued to do their part. Braun singled in the first, but Fielder lined out to end the inning. Fielder doubled to lead off the fourth and scored on Rickie Weeks’ two-run homer. In the fifth, with one on and one out Braun hit another ground-rule double, and Fielder walked to load the bases, but Weeks — hurt by a questionable umpire call — grounded into a double play to end the inning. And in the eighth, Fielder led off again and blasted his third home run of the playoffs.

But none of it mattered, because Pujols reminded everyone what happens when you pull on his cape. Pujols homered in the first and then hit doubles in each of his next three plate appearances, becoming just the fourth player ever to drive four extra-base hits in a playoff game. The Cardinals won, 12-3. Marcum, like Greinke, has not been the same pitcher in October that he was in the regular season. In his two playoff starts, Marcum has allowed 12 runs in just 8.2 innings combined, each time putting the Brewers in a hole that not even Braun and Fielder could get them out of.

There’s also no guarantee that Braun and Fielder won’t see their bats go cold at just the wrong time. The Giants got to the World Series in 1989 thanks to Will Clark and Kevin Mitchell, and then they ran into the Oakland A’s. Dave Stewart and the Oakland staff figured out a way to pitch to the Giants’ best two hitters, who combined to hit .273/.294/.394 in the World Series, as the A’s swept the Giants.

For now, at least, the Brewers are content to ride their two stars as far as they can take them. And Braun and Fielder seem more than happy to carry their teammates all the way to the finish line.

NLDS Preview
The Astros hit rock bottom
Philadelphia Phillies: The End is Nigh
On the Arizona Diamondbacks’ 2011 turnaround
The Case for Carlos Beltran