Laying Down the Week 5 Odds 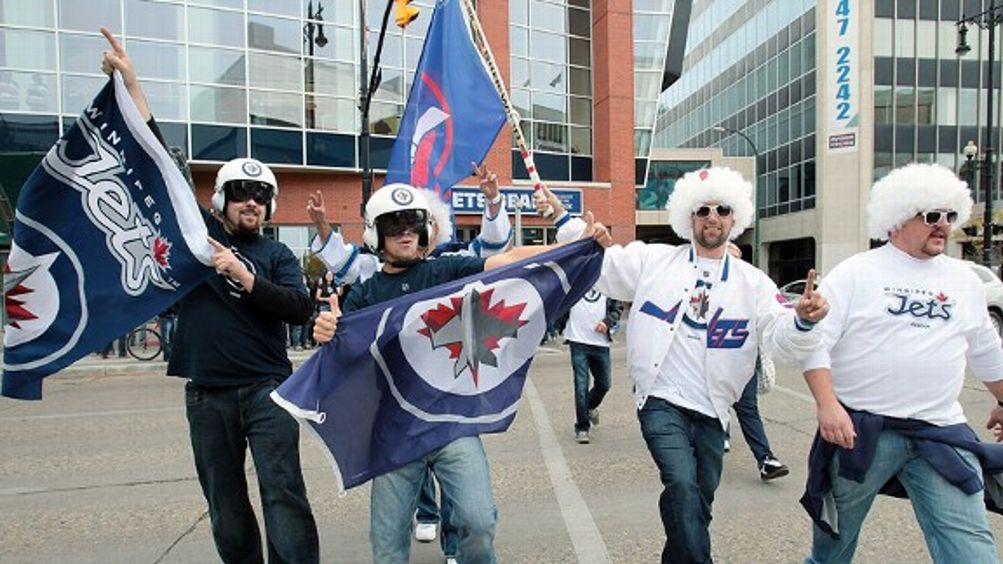 Yesterday, in the hours before the doors were opened for the Winnipeg Jets’ first regular-season game, fans congregated on the streets outside the MTS Centre. Many of them were wearing the city’s newest status symbol: vintage Jets jerseys, with names such as Hawerchuk or Selanne or even Hull across their backs. Not so long ago, those jerseys were packed away in closets and basements, sad reminders of what this city lost in 1996. Now they, like the Jets, are back in fashion.

Inside the arena, the Zamboni flooded the empty ice. Beer kegs were tapped. The storied, visiting Montreal Canadiens laced up their skates. And the air in the arena’s upper reaches was that crisp, telltale cold: It was the good kind of winter in Winnipeg once again.

It had been a frantic few months since an ecstatic May 31, when Mark Chipman, the co-owner of True North Sports and Entertainment, announced that he had purchased the Atlanta Thrashers and would be moving them to Winnipeg. Fifteen years after the National Hockey League had left — relegating Winnipeg to the minors, abandoning a fading city that had already taken its fair share of blows — it would return. This was not small news here. The team met its goal of selling 13,000 season tickets — in 17 minutes.

When the first incarnation of the Jets left to become the Phoenix Coyotes — how’s that going, by the way? — Winnipeg was a different city. It occupied a different space in the universe, at least. From a hockey standpoint, it faced any number of obstacles: an outdated barn of an arena, a weak Canadian dollar, tapped-out ownership, a dejected and increasingly absent fan base. But more important, and more calamitous, the city itself was falling apart. Winnipeg has always been a tough town, an easy place to get your ass kicked. But downtown especially had begun a long, depressing turn. It was held together by holes.

Even the intersection of Portage and Main — one of Canada’s most famous crossroads — had become desolate, a feeling made worse after traffic engineers had decided to push pedestrians underground. (One of the “Save the Jets” rallies, when people literally threw coins and crumpled bills into plastic bags in a vain effort to keep the team, was that rare remaining day when a crowd gathered there.)

And then that first Jets-less winter blew in.

In Winnipeg, winter isn’t so much a season as it is a perverse test of human resolve. It’s cold and dark enough here to make people wonder whether they’re in the middle of a four-month-long solar eclipse.

A winter in Winnipeg without hockey to help count down the days?

It was perpetual. It was nuclear.

It’s hard to overstate the hold that hockey has over Canada. Two-thirds of the country — 22 million people — watched Sidney Crosby score his winning goal at the 2010 Winter Olympics. Six of the 10 largest riots in Canadian history have somehow been related to hockey. The back of the $5 bill depicts children playing shinny on a pond.

The idea seemed to befuddle American defenseman Dustin Byfuglien when he was asked about playing in front of such an important national figure. “Realistically, we probably won’t even see him — or her,” he said, just in case.

Because Byfuglien had no clue.

There is a feeling up here, both justified and terribly insecure, that Americans don’t understand us, the inhabitants of America’s hat. As a country, we define ourselves more often by the things we are not — as in, those ways we differ from Americans — than by the things we are. But in hockey, Canada has perhaps its most defining feature, a game that, at its best, embodies the traits we’d like to think represent us at our own best: a gritty kind of grace, equal measures beauty and endurance.

That’s how Winnipeg, even in its worst moments, saw itself. “The city of Winnipeg is a collective act of will,” Chipman likes to say. “Winnipeg is a hockey city, and it deserves a hockey team.”

Now: There is a great danger, especially during days like yesterday — when the fans stood and cheered at the tops of their lungs, tears streaming down so many of the faces here — to get caught up in the sentimentality of it all. It’s really tempting to wax poetic about something like hockey in a city like Winnipeg. It’s too easy to make yesterday into something bigger than it was.

The truth is hockey is just another game. There are many things we do that are more important. Winnipeg is just another city. There are many towns that fell on harder times. And the Winnipeg Jets, these Winnipeg Jets? They’re just the Atlanta Thrashers — a bad, bad hockey team — in different jerseys. They’re a corporation like any other, an exercise in revenue generation for some very rich men, including David Thomson, the richest man in Canada. The Winnipeg Jets are not a miracle. They will save no lives; they will put out no fires.

And yet there is no denying their power as a symbol for this rebounding city. Winnipeg remains far from perfect. It is still missing many teeth. But there are cranes in the sky for the first time in years, building new airports and museums and football stadiums; the dollar is close to par; there’s a new arena and committed, charismatic ownership. The view is changing here. Yesterday, Montreal came to town. New York, Washington, Boston, Los Angeles, and Toronto are coming, too.

On 41 nights this winter, this city will be oversize, playing host to a city bigger than itself.

On 41 nights, it will be more of a winter in Winnipeg.

Montreal also happened to pound Winnipeg 5-1 last night. These Jets will lose many more times this season. They would have been nervous yesterday, those holdovers from Atlanta, playing in front of actual fans. But they are still a collection of mostly young, defensively suspect players. Their numbers include 18-year-old Mark Scheifele, a capable-seeming kid with a bright future. But it’s the rare team that puts teenagers on the ice and dominates.

And no matter what magic happens in Winnipeg in the coming years, the Jets will always remain a small-market team. Nothing will change that. Their very existence is only possible because of the collective bargaining agreement, and the salary cap, that followed hockey’s 2004-05 lockout. The MTS Centre holds only 15,004 fans — making it a terrific place to watch a game, loud and intimate, but a small building by NHL standards.

There are so many things charmingly … hokey … about this team. PORK FOR PEAK PERFORMANCE, the scoreboard reminded the crowd last night on behalf of Manitoba’s hog farmers. Pork, in this instance, was being employed as a noun. (The Winnipeg Jets: Fuelled by Passion, Sponsored by Meat.)

If sentimentality is a mistake here, however, so, too, is cynicism. How often do we complain about the growing distance between us — between the fans and their teams? About the unstoppable, brutal machines that our leagues and associations have become? About the hype, the excess, the debauchery, the shame?

In the Winnipeg Jets and their performance-enhancing pork products, we have our collective antidote. This might be the one big-league city in North America that can claim a pure soul. Here, it won’t much matter whether the Jets win or lose. All that matters is that they exist.

A strange thing happened at the end of last night’s game. Winnipeg was down by four goals. There was less than a minute to go. The stands were still full. The crowd stood and cheered — the way they had stood and cheered 15 years ago when the Jets played their last game, a loss a million times worse — and then, as the clock raced closer to zero, they began to chant: Go, Jets, go!

Previously from Chris Jones:
The Survivor
The Odd Death of Arturo Gatti
A Man of God