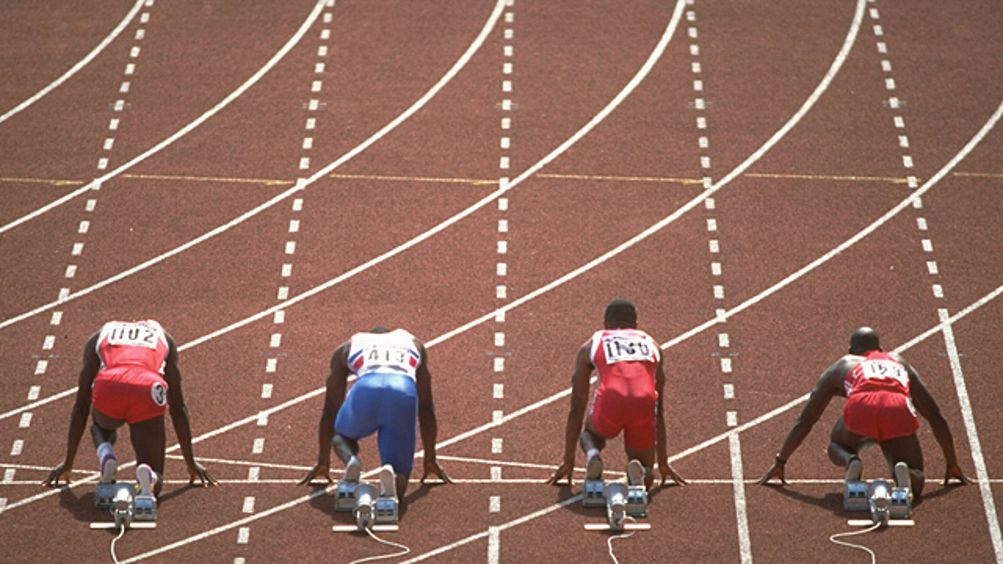 How do I explain how exciting it really was, almost 25 years on? How do I dislodge that one vivid moment from the moralistic flotsam and authoritarian jetsam of the absurd anti-some-drugs-but-not-others crusade it touched off? How do I explain what it was like in South Korea that afternoon, when the early autumn light fell in just the right angles at just the right time of day, and the stadium buzzed and crackled as though everyone in the joint were plugged into the same electric current, running around the stands in constant, mighty arcs? How do I explain how perfect the moment really was, given all that’s happened since that day?

How do I explain how startlingly different the two men looked that day, as the sharply angled sunlight threw the long shadows down the straightaway ahead of them? Carl Lewis was long and slender and appeared always as though he were looking ahead at the golden future that he, more than anyone else ever, deserved. And Ben Johnson was a great bull of a man, with the look of a pirate who loved his work, and who seemed as though he had no future beyond that line that crossed the track 100 meters away. One was there to win. One was there to beat people. One was there to create art. The other was there to prove that he literally could run people bloody. That’s what you could see in their eyes, in the way they carried themselves, in the way that they moved through the bright, still air.

9.79*, the next film in ESPN’s Emmy-nominated documentary series, is set to premiere tonight at 8 p.m. EDT.

Malcolm Gladwell and Bill Simmons discuss 9.79*, how Canada embraced Ben Johnson, and the use of PEDs in sports.

The race itself was a detonation of sight and sound, of light and shadows and cheering and a kind of undifferentiated animal roar that seemed to resound all the way out to the distant hills of Daegu and back again. Johnson devoured the event, blowing up through sheer ferocity any pretense of grace. It was as though all the pent-up energy of light and sound and anticipation that had been coursing through the stadium had found its focus in his wild eyes. The race he ran was the outward manifestation of what everybody in attendance was feeling. But it was that anticipation, that undeniable charge that comes when the perfect event meets the perfect moment, and everybody feels it coming and everybody knows it’s unavoidable, and God, just fire the gun already! That is what put the charge in the afternoon.

How do I explain how long I seemed to hold my breath?

Then, the world exploded. And after that, the echoes. The endless, sounding echoes. Always the echoes.

It was all we talked about that night and into the whiskey hours of the morning. I fell into evil company in a section of Seoul called Itaewon, and we sat around the table and drank soju and OB beer and talked about what a remarkable thing we’d witnessed that afternoon. I somehow navigated my way back to the Olympic press village and fell asleep.

At which point the sports editor of the Boston Herald, an old friend of mine named Bob Sales who’d given me my first real job in the business, called my room. All I could decipher was something about Ben Johnson and a drug test. I managed to get dressed without putting anything on backward and shuffled out to the curb to wait for the bus that would take me to the media center so I could find out what was going on. I can safely say that I never have felt worse than I did that morning — until I got to the media center and saw the Canadian reporters, who looked like hell’s breakfast buffet.

You have to remember that, because of the time difference, and the international date line, the very early morning in South Korea coincided with first-edition newspaper deadlines on the East Coast. So we were all pursuing a story that had to be written in an hour or so while it wasn’t dawn where we were. Meanwhile, under those same circumstances, the Canadian reporters were chasing their country’s Black Sox scandal, except that, in this case, instead of having thrown the competition, the athlete in question had turned in a shattering performance, perhaps the greatest in Canadian Olympic history, and now it had turned into an epic international quasi-crime story, which they were trying to chase down while learning to spell “stanozolol” on the fly. The ones who didn’t look exhausted appeared to be suffering some strange form of emotional whiplash. The jokes arose instantaneously:

Rumors about PED use had been floating around these Olympics ever since they’d lit the torch. In fact, there were as many surrounding American sprint hero Florence Griffith-Joyner as there were around anyone else. (I’d sat next to an official of the Barbadian Olympic Committee on the flight over, and he’d regaled me with tales of secret Caribbean laboratories and famous athletes who’d stop by under assumed names.) This was an inchoate frenzy that simply was waiting for something to give it meaning. And now, here it was.

The world proceeded to lose its mind. Frank Deford, for whom I have the greatest respect, referred to PED users as “terrorists,” thereby precisely presaging a future mindless frenzy in the middle of a present one. It has yet to exhaust itself. You want to see the roots of the Mitchell Report, and the waste of time and money that was the pursuit of Barry Bonds and Roger Clemens, and of all the silly moral preening that has wasted all of our time? Do not look to BALCO. Look back to Seoul.

Gradually, the details came to light. Johnson had a troublesome hamstring, and so he’d gotten himself shot up to run the race. (Which is not to say that he was unfamiliar with the ways of the needle, just that this was the proximate cause of the events in Seoul.) It was only a few weeks later that a Los Angeles Dodger named Kirk Gibson had a bad leg, so he shot himself up to be able to play in a World Series game against the Oakland Athletics. He hit a home run to win the game and people say it was one of the greatest things they ever saw.

Me? I’ll take that afternoon in South Korea, when the light fell just right and the shadows poured down the track before the runners did. 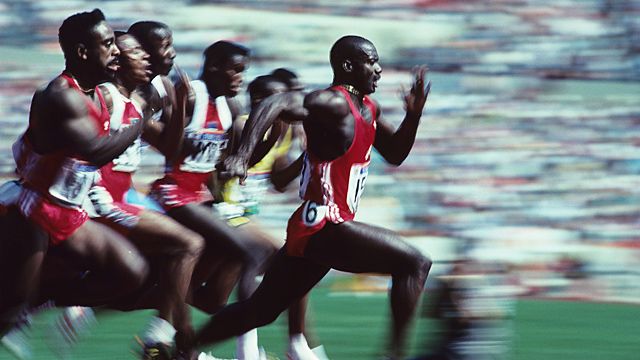 A decade or so after I saw Ben Johnson win an Olympic gold medal on the track and then lose it in the laboratory, I saw him again. He was doing a benefit race in Charlottetown, on Prince Edward Island, in the middle of a howling gale that had blown in off the Atlantic just ahead of winter. Rain blew sideways across the muddy track as Johnson prepared to line up against a stock car, a trotter, and a thoroughbred named Windsong. Johnson finished third because Windsong got spooked by the stock car and jumped the gun, and because Johnson made the mistake of looking over at the trotter just as they were getting to the finish line. He beat the car because it slewed all over the track in the mud.

It was a long, strange night in what had become a long, strange life for him. He was talking then of trying to get back into international competition, of how his latest appeal of his lifetime ban was the most promising one he’d had yet. He told me that he’d had fun, and that the Charlottetown exhibition had been good exercise, and that he’d been glad to do it because the charity helped so many children. He spent a long time along the rail in the rain, signing autographs and posing for pictures while the storm grew worse around him. His eyes were gentle and soft.

I turned away and walked back to my hotel, hearing the sea throwing itself against the dock across the road. I sat at the bar and ordered a whiskey and told the bartender what I’d just seen, and then I told him what I’d seen 10 years earlier, at the perfect moment in the perfect place at the perfect time of day, and how the whole thing just detonated right there, and how I started holding my breath before I even knew I was doing it. It was, I told him, just about the damnedest thing I had ever seen. There, with a storm battering the glass of the windows, I could still see the light knifing through the autumn afternoon. I could hear the echoes sounding, sounding over the angry surf across the way.