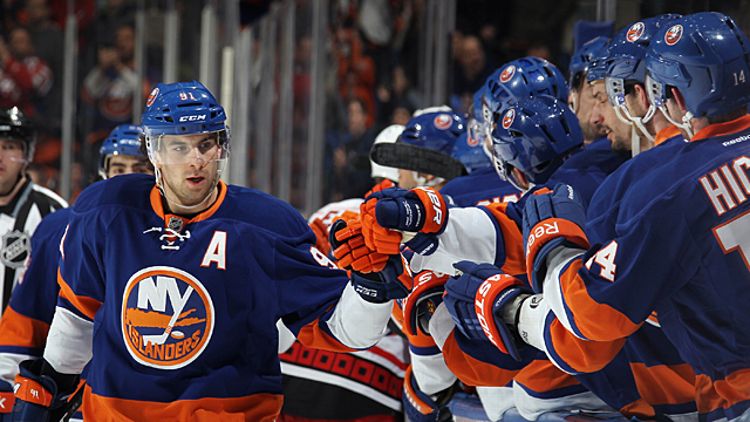 With nine NHL games scheduled for Tuesday night and another four on Wednesday, it’s hard to know how to allocate your attention. Here’s our recommendation for the most interesting of the week’s early matchups.

Boston at New York Islanders
Tuesday, 7:30 p.m. ET
NBCSN
You can tell a lot about a society by its attitude toward leisure sports. Which is why you barely have to look at the Eastern Conference standings to gauge the relative health of the Boston Bruins and New York Islanders — you just have to assess the vibe surrounding their golf games.

The Bruins — with one of the last breaks in the schedule before an intense stretch of games — visited the Florida manor of team owner Jeremy Jacobs on Saturday while down in the Sunshine State to play the Panthers. “There’s a lot to do,” Johnny Boychuk (avec shades and a fishing pole) explained to a team reporter. “Some guys are fishing, some are dirt-biking, some are playing basketball or golfing. So it’s pretty nice.”

You know how when you watch the Olympics, it’s easy to forget that so much is taking place simultaneously? That’s how I imagine the scene at Jacobs’s place: the same higher, faster, stronger Spartan spirit, except instead of one guy on the rings and another on the pommel horse, it’s Brad Marchand riding an ATV off a cliff while Andrew Ference plays H-O-R-S-E nearby. Is there an advanced stat that measures vigor? Picture the sunburned faces, the easy athleticism, the mob-monied real estate … Just look at this goal from Zdeno Chara on Sunday: graceful, effortless, honestly no big deal!

Forget the Olympics, the Bruins might as well be the Kennedy clan playing flag football on the side lawn as photographers for LIFE magazine loll about. Imagine how good Patrice Bergeron must be at bocce.

Then there are the Islanders, as sickly and nakedly ambitious as Tom Ripley looked next to Dickie Greenleaf. Say this for Charles Wang’s boys: They know how to awkwardly linger. They lost five straight a few weeks ago and kind of bounced back, they lost 7-0 to the Flyers and kind of bounced back, and so on. They’re not going away just yet, far from it. But their 4-2 loss to the Carolina Hurricanes on Sunday was a new low.

“I saw our D turned way too much, way too many giveaways by our forwards and our D, and you’re not going to be successful like that,” coach Jack Capuano said after the game. “If guys want to play individualistic, go play golf or tennis.” (Somewhere, Nino Niederreiter stands alone inside a Zamboni loading dock, ritualistically practicing his backhand against the wall.) That says it all: For the Islanders, golf and tennis is seen as a silly, selfish luxury, rather than a competitive way to blow off some steam. There’s clearly a need for an outlet, though. When the Islanders lost another game to the Hurricanes earlier in February, Travis Hamonic snapped and John Tavares looked uncharacteristically despondent for awhile after the final buzzer.

It’s interesting that Capuano singled out golf and tennis, because Tavares actually fits the profile of those sports’ young phenoms; in 2005, the Canadian Hockey League created an “exceptional player” status to let the 14-year-old Tavares compete. In 2009, he was picked first in the NHL draft. In his first three seasons he recorded 54, 67, and 81 points, and he’s already got 25 in 19 games this year. (Playing alongside him, Matt Moulson has quietly been one of the league’s few recurring 30-goal scorers.)

“It’s a matter of, do we want to play as a team, go hard every shift,” goalie Evgeni Nabokov told Newsday, after the 7-0 drubbing by the Flyers, “or do we wait around for Johnny Tavares to score a goal and then say, ‘OK, now I’m going to play today, too?'”

Hockey players can hit their primes at young ages, and at 22, Tavares is right there. But so much of the success of a career is built on the same vagaries as the success of anything in life: The timing and the surroundings have to be right. Not everyone is a privileged Tyler Seguin, winning a Cup right off the bat. Some guys get the robust backyard barbecues, and others get a more wan assemblage. Tavares can only do so much, and you worry that he might try to do too much instead.

One lingering question on the occasion of Bruins–Islanders: How will Tim Thomas be following along? Is his setup like Rafiki interpreting magic desert dust, or does it more closely resemble Dennis Hopper surveilling Keanu? Does he receive Morse code transmissions from his agent? Is there a Center Ice subscription in his preemptive-post-apocolyptic lair, or does he take pride in not even remotely knowing that the lockout has ended, like a one-man #lastman challenge? Does he have a Bud goal light, and if so, for which team? Is it possible that he just watches games like the rest of us lugs: on his couch in his sweats, half-watching the game and half-wallowing in nostalgia?

It’s kind of amazing how Thomas’s absence both looms over and illuminates the two franchises. For the Islanders, he’s a savvy salary-cap circumvention wrapped in a goalie joke and shrouded in typical cheap Nassau Coliseum oddity. For the Bruins, he will always inextricably represent the 2010-11 Stanley Cup season: In the span of a few weeks’ time, the guy won the Conn Smythe for MVP, the Vezina for best goalie, and the hearts of the hockey world for his laid-back mustachioed devil-may-care old man IDGAFitude. Doesn’t that seem like it was so, so long ago? But the Bruins’ ability and willingness to cut ties with him (as well as their remarkable restraint in dealing with his everything throughout the last year) also shows the team’s commitment to moving forward and not getting lost in its own beautiful past.

Other notable games in the next two days:

Carolina at Washington
Tuesday, 7 p.m. ET
Like a certain other D.C.-area professional sports team did this fall, the Washington Capitals have dug themselves into enough of a hole early this season that just about every game has become a “must-win.” And so just as the Redskins had to go on an RG3-led rampage to make up for their early-season rust, the Caps are going to need more gaudy line items like Alex Ovechkin’s on Saturday (three goals, one assist) if they want to increase their chances — currently about 10 percent — of making the postseason. The Capitals are tied with Buffalo for the fewest points in the Eastern Conference, though they’ve played two fewer games. Beating a team like Carolina, with its shaky grip on the Southeast Division, is a good way to make up some ground.

Detroit at Los Angeles
Wednesday, 10 p.m. ET
NBCSN
NBC Sports Network must be happy with the way the Kings are playing heading into Wednesday night’s featured “Rivalry Night” game between Los Angeles and Detroit. The Kings’ 5-2 defeat of the Ducks on Monday night was a clash of two streaky teams crossing paths: Anaheim beginning its inevitable drift back to earth after a few weeks of unsustainable highs, the Kings taking off — thanks to improved goaltending and some more favorable puck luck.

Buffalo at Tampa Bay
Tuesday, 7:30 p.m. ET
The Buffalo Sabres can’t stop Steven Stamkos, they can only hope to contain him.