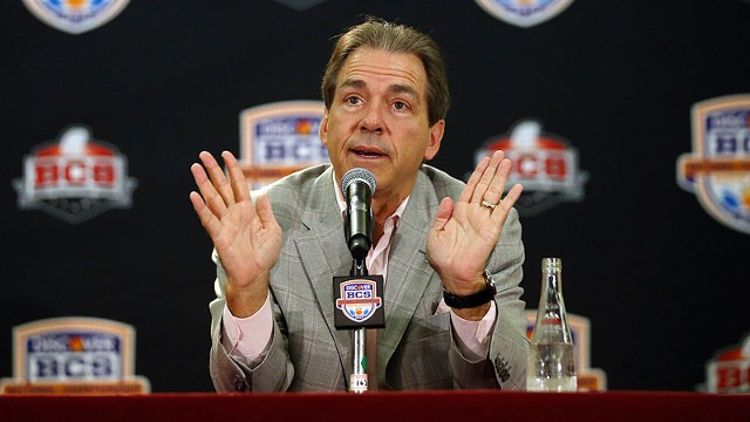 Last Saturday, Nick Saban offered a scholarship to an eighth-grader. Saban is the best coach in college football because he is also its most zealous authoritarian, and yet, in this case, what Saban did is not quite as Machiavellian as it sounds. For once, he was actually playing catch-up with a trend: The eighth-grader in question, Dylan Moses, is a 6-foot-1, 215-pound running back who runs a 4.46 in the 40 and was already offered by LSU last summer (watch him ravage the Louisiana middle school countryside in this highlight video — I highly recommend 2:11, when Moses actually makes a tackle by using an opponent as a projectile).

Moses is not the youngest football player to be offered a scholarship in recent years: Quarterback David Sills committed to USC at age 13, and another quarterback, Tate Martell, committed to Washington at Moses’s age of 14. And none of this is particularly new: Back in the fledgling years of the previous American century, a Princeton recruiter named Charles E. Patterson trolled the greens of Exeter and Andover in search of talent. “He sent into the Princeton entrance examinations boys one, two, even three years away from college,” wrote muckraking journalist Henry Beach Needham in McClure’s magazine. “‘Go in and try it,’ he told them. ‘There’s no harm in trying. You might get through.’”

Articles like Needham’s led to the formation of the Inter Collegiate Athletic Association, which soon became the National College Athletic Association, which is now facing the most deep existential crisis in its history — largely because, by refusing to address the imbalances of the system it’s meant to police, it has failed to solve the issues it was created to address. But that’s a vast discussion, and I think maybe there’s an easier solution to this notion of “recruiting creep,” at least within the current system: If colleges insist on recruiting children, and said child is willing to commit to a school, why shouldn’t the school be willing to commit to them?

As it is now, there is no downside to offering a seventh-grader. Though Sills committed to USC, the school will offer nothing real to him until he signs on the dotted line around the time of his senior year of high school. But what if USC were bound to pay his scholarship, regardless of whether Sills breaks his leg or develops a hitch in his delivery or drops out of school his junior season to surf the big waves at Mavericks? What if any agreed-upon commitment offered to a player who had yet to enter high school were automatically binding to the school?

I can’t imagine anyone, even Nick Saban, enjoys the idea of chasing after middle schoolers. I can’t imagine any institution of higher learning that still clings to a modicum of self-respect would advocate for this practice, and I imagine these schools would prefer to eliminate it in all but the rarest circumstances. Perhaps there’s a flaw in what I’m proposing, but I have to imagine if someone with gravitas and authority, someone who represented a neutral governing body, presented something like this to a room full of college administrators, they might at least be willing to debate its merits. Unfortunately, I’m not sure anyone like that exists.