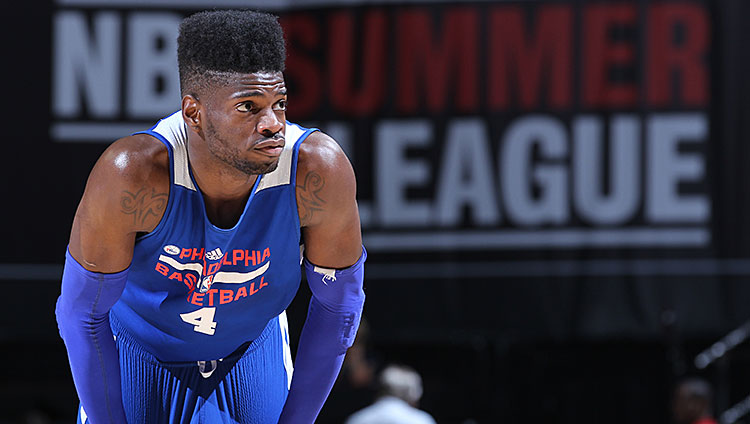 And these … are your Summer League Awards.

The biggest obstacle to Year 2 of Sam Hinkie’s PhilaTankia plan is certainly a healthy Nerlens Noel. Noel blew out his knee in February 2013, was drafted by the Pelicans with the sixth pick, then traded to the Sixers. In a showing of abundant care for the player’s long-term health, and a dearth of caring about winning actual basketball games, he was lovingly swaddled in bubble wrap and placed carefully in Hinkie’s desk drawer.

And, hey, looking pretty good on both counts. The Sixers went 19-64 last season, landed Joel Embiid — another injured big, this time with superstar potential — and a fully rested Noel has been a summer league force. Nerlens played three games in Orlando and two games in Vegas, averaging 13.4 points, 5.6 rebounds, and 2.6 blocks per game, and generally looked like a ready-made defensive destroyer. His offensive game can sometimes resemble the flailings of one of those used-car-lot air dancers, but he’s somehow made it work, all while displaying a surprising passing vision from the post.

Memo from Sam Hinkie to Nerlens Noel: Stop being so good right now.

Monday, July 14, the fading minutes of a summer league game between the Raptors and Mavericks. I was walking into the arena, making my way to media row on the far baseline, when the crowd in the Cox Pavilion suddenly came alive with gasps and mingled screams from the several hundred attending fans. “Shoot it! Shoot it!” Even Mark Cuban was on his feet, shouting, “Shoot!” I glanced at the court, and there was Yuki Togashi — who attended Kevin Durant’s high school, Montrose Christian, and plays professionally in Japan — dribbling at the 3-point line.

Togashi shot and missed. The crowd AWWW-ed with a special kind of smirking disappointment, like the reaction an arena makes when a fan misses a half-court shot for $5,000. My first thought was that I had made my way to, in media res, some kind of epic Summer League Moment,™ Lin vs. Wall 2.0, perhaps. When I got to my seat and looked up at the scoreboard, Togashi had zero points. Long live Yuki Togashi.

I hate when young players get compared only to players of the same race or similar appearance. It’s pretty lazy. That said, I think Doug McDermott will end up being a better Kyle Korver. McDermott’s jumper is as deep and wet as the Mariana Trench: 18 points per game on 44 percent from 3, 96 percent from the line. NBA nerds will love the way he peppers his interviews with game terminology and shout-outs to SynergySports.

The best last name in summer league and also the most existential.

Is This Real, or Is This Just Summer League? (tie) Rudy Gobert, Jazz, and Tony Snell, Bulls

Rudy Gobert looked like an overwhelmed, understrength, fringe stiff in his first season in the NBA. Tony Snell carved out a rookie season rep as a solid defender who couldn’t shoot and wouldn’t give Joakim Noah a celebratory chest-bump.

Both guys have been revelations in summer league.

Gobert averaged 11.8 points on 73 percent shooting, 9.8 rebounds, and a bona fide rim-protecting 2.5 blocks a game. The Thomas & Mack Center was lousy with Utah fans who made the six-hour drive south from Salt Lake City, chanting “Rudy, Rudy” during the Jazz’s 16-point, quasi-meaningless blowout of the Bucks, in which Gobert blocked five shots — including a highlight rejection of star rookie Jabari Parker — and scored 13 points and nine rebounds.

Snell joined the year 2014 by shearing his braids (Kawhi Leonard is ride-or-die until the look actually comes back into style) and rediscovering his college shooting stroke. Snell was the fifth-highest scorer in Las Vegas, notching 20 points on 46.6 percent shooting (an eight-percentage-point bump from his regular-season number) and a Bulls-fans-praying-this-is-at-least-partially-real 50 percent from 3 (18 percent better than his rookie season).

It’s been a bruising week and a half for Daryl Morey. Always aggressive, even ruthless, about flipping players for liquidity and assets with which to pursue stars, Morey struck out in his bid to sign Chris Bosh to a max deal and then use Bird rights to re-sign restricted free agent Chandler “Buffalo Jeans” Parsons. But it’s like they tell baseball players in Cuba: You don’t get off the island by bunting.

Rallying in Vegas at the partially Maloof-owned Palms, Morey ran a Brylcreemed comb through his Dork Elvis pompadour as fire and DJ Khaled rained down from the ceiling, winked at himself in the mirror, then proceeded to drop serious topspin science on any and all comers, including Hornets GM Rich Cho, during his yearly summer league charity Ping-Pong tournament. Scouting report: Don’t let him line up his overhand smash, keep him pinned on the baseline, make him move from side to side. Game, set, match, and everybody’s hands go up!

You Can Feel Good, Good, Good About Hood (Every Other Game): Rodney Hood, Jazz

Rodney Hood’s summer was as streaky as a sleep-away camp kid’s drawers.

All of the Lights: Andrew Wiggins, Cavaliers

Sim played only 10 minutes over four games, during which he took a grand total of one shot (which he made) and grabbed two rebounds. But Bhullar was a ubiquitous sight at summer league, constantly ambling around the arenas, even on days off, like a plaintive medium-size moon orbiting his pro-basketball dreams.

Later on, he lied about stuff.

Sim Bhullar says he fits on airplanes and in your average car. I don't believe any of this, but I guess I have to.

Kobe Bryant on Seattle: “I'd much rather come here in the postseason than Oklahoma”