Your Guide to the Rest of the NHL Regular Season 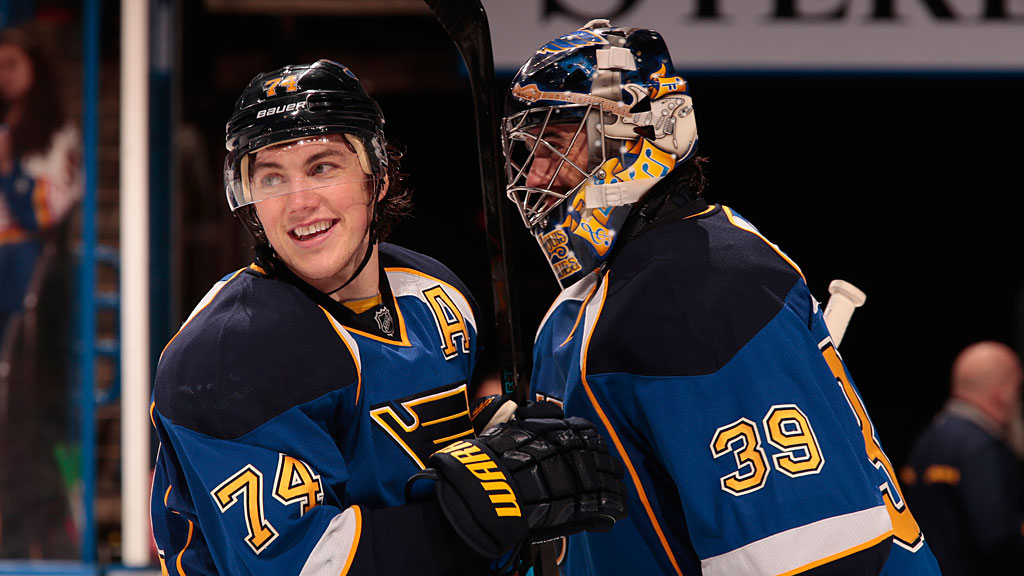 Today is April 1, which means two things: Any minute now, the Toronto Maple Leafs will shout “April Fools’!” and we’ll all have a good laugh about the series of increasingly dumb things they’ve spent the year saying and doing; and the NHL regular season is heading down the homestretch.

That last part is probably more important to the rest of you, so let’s focus on that. We’ve got less than two weeks of action left before the season concludes on April 13. With all four wild-card spots up for grabs and every team other than the Bruins and Penguins still fighting for playoff seeding, there are plenty of important nights left on the NHL regular-season calendar.

Of course, they can’t all be winners. So to help you plan your next few weeks of viewing, here’s a day-by-day breakdown of the April schedule.

The can’t-miss matchup: Dallas at Washington — An interconference battle between two teams that are just on the outside of the playoff picture and desperate for points. (Why, yes, this will end up being a three-point game, why do you ask?)

Other good options: Montreal at Tampa Bay is a first-round playoff preview that will help decide who gets home ice. Rangers at Canucks gives Alain Vigneault a chance to all but bury the playoff hopes of the team that fired him. The Flames visit Toronto in Brian Burke’s first trip back to Toronto since he was fired last January, and if he doesn’t spend the whole game pelting Dave Nonis with waffles then I’ll never forgive him.

No thanks: There’s really no reason to watch Panthers at Islanders, unless you’re a top-five prospect in this year’s draft. By the way, the Islanders are going to show up a few times in this section. Sorry about that, Islander fans.

Entertainment quotient: 8/10 — This is shaping up as a fun start to the month.

The can’t-miss matchup: Boston at Detroit — These two Original Six teams haven’t met in the playoffs since 1957, but could be headed for a first-round matchup this year.

Other good options: The Coyotes can solidify their playoff spot with an upset win in Los Angeles. Oilers at Ducks is a Viktor Fasth homecoming, which isn’t really interesting, but there are only four games tonight so I’m reaching.

No thanks: The Senators and Islanders are a completely forgettable pairing.

The can’t-miss matchup: Los Angeles at San Jose — The Sharks need to keep winning to have any shot at the division title. If they don’t, then this is a preview of what’s likely to be the first round’s most brutal matchup.

Other good options: The Sabres visit the Blues for the first time since the Ryan Miller trade. Both the Wild at Blackhawks and Jackets at Flyers should will be key games for the wild-card races. Rangers at Avs features two good teams. Boston at Toronto is just a jerk move by the schedule maker at this point.

No thanks: I guess it’s Flames at Lightning by default.

Entertainment quotient: 7/10 — There’s something for everyone.

The can’t-miss matchup: Capitals at Devils is probably a must-win for New Jersey, assuming it’s even still in the wild-card race.

Other good options: Canadiens at Senators has a good chance to be one of those “Ottawa’s building gets taken over by visiting fans” games, which are always fun. Blackhawks at Blue Jackets is a chance for Columbus to continue its playoff push with a huge win over its former quasi rivals.

No thanks: Literally nobody will watch Flames at Panthers.

Entertainment quotient: 4/10 — There are enough games that one or two should turn out to be good, but on paper this looks like kind of a dud.

The can’t-miss matchup: Colorado at St. Louis — Two of the Central’s powerhouse teams face off. The Avs are missing Matt Duchene and headed toward a first-round matchup with the Blackhawks that nobody will pick them to win. Beating the Blues in St. Louis could go a long way toward changing that perception.

Other good options: Flyers at Bruins is a rematch of a great game from Sunday, and has an outside shot at being a first-round preview. Kings at Canucks could be fun if Vancouver is still hanging around the playoff race. Wings at Habs should be a good one, and even if it isn’t, we’ll all have to pretend it is since it’s an Original Six matchup.

No thanks: Given the way San Jose seems to play down to the level of its competition, I wouldn’t recommend Predators at Sharks.

Entertainment quotient: 6/10 — It’s not a bad slate, but you’d think the league could do better on the penultimate Saturday night of the season.

The can’t-miss matchup: Blues at Blackhawks — This is the nationally televised Sunday afternoon game, and it’s a good one. It could also be a Central final preview.

Other good options: The Penguins visit the Avalanche in a meeting of top 10 teams. The Stars visit the Panthers in what could be the most awkward chapter of the Tim Thomas/Roberto Luongo rivalry yet.

No thanks: The Blue Jackets host the … uh … Islanders. Sorry, guys, at least I had your back last year.

Entertainment quotient: 4/10 — Not much to get excited about, but that Blues/Hawks battle should be a must-see.

Other good options: Flames at Devils? Nope. Wild at Jets? Don’t think so. Ducks at Canucks? Maybe, if we’re feeling especially kind, but no.

No thanks: See above. This entire day is a big “no thanks.”

Entertainment quotient: 1/10 — The NHL knows this is the last week of the season, right?

The can’t-miss matchup: Coyotes at Blue Jackets — A lot can change in a week, but right now these look like two teams that will be desperately chasing wins as they try to secure wild-card spots.

Other good options: The Capitals face the Blues in a game that should have implications for both the Eastern wild-card race and the Presidents’ Trophy. Colorado at Edmonton probably won’t be good, but will at least give the two teams a chance to compare notes on their rebuilds.

No thanks: The Senators and Islanders are a completely forgettable pairing. We’ve used that line already, but it’s OK because you forgot.

Entertainment quotient: 5/10 — Lots of games and lots of possible playoff teams in action, but a shortage of really intriguing matchups.

The can’t-miss matchup: San Jose at Anaheim — This could end up being a showdown for the Pacific Division title. The winner gets to host a wild-card team, while the loser has to play the Kings. The stakes don’t get much higher in the regular season.

Other good options: Detroit at Pittsburgh will help determine whether the Wings can continue their playoff streak, and doubles as a possible first-round matchup. Montreal at Chicago features two teams fighting for home-ice advantage in Round 1. The Blue Jackets visit the Stars to make up the Rich Peverley game, which will be confusing because it will start with the score 1-0.

No thanks: L.A. at Calgary doesn’t have much going for it, unless the Flames give Darryl Sutter a “welcome back” scoreboard video that’s just a montage of him making Darryl Sutter faces.

Entertainment quotient: 9/10 — Almost all of it for that Sharks/Ducks showdown, which if we’re lucky could be the biggest game of the month.

The can’t-miss matchup: Toronto at Florida — The Maple Leafs look to continue their late-season playoff push! Or, in a slightly more likely scenario, the Maple Leafs try to snap their 12-game losing streak under the leadership of new head coach Riddick Bowe!

Other good options: Honestly, I have no idea. This is a weird day — it features a ton of playoff bubble teams, with Washington, Minnesota, Phoenix, and New Jersey all in action. Some of those games will be absolutely critical, but there’s no way of knowing which ones it will be 10 days from now, and none of the other matchups really stand out as must-see.

No thanks: The Jets, who have nothing to play for, host the Bruins, who’ll have the East’s top seed wrapped up and will probably be focused on just staying healthy.

Entertainment quotient: 7/10 — With 11 games on the schedule, some of them have to be good. We just don’t know which ones.

The can’t-miss matchup: St. Louis at Dallas — Well, the Stars could be out of the race by then. But if not, they’ll be fighting for their playoff lives against a team looking to wrap up the Presidents’ Trophy. And it could be a first-round preview.

Other good options: The Caps host the Hawks and the Wings host the Hurricanes in a pair of games that could help decide the East’s wild-card picture. Colorado at San Jose will feature two top teams, and could impact matchups and home ice for the first round.

No thanks: Jets at Flames is an all-Canadian matchup, which means both teams are terrible.

Entertainment quotient: 5/10 — Not bad, though it’s weird there are only seven games, given it’s the season’s final weekend. They’re probably just saving up to have everyone play on Saturday night. Can’t wait!

The can’t-miss matchup: Ducks at Kings — If Anaheim hasn’t wrapped up first place in the Pacific yet, this could be a case where the Ducks have to beat the Kings to avoid a first-round matchup with L.A. And if the division has been locked up, this will be a late-season meeting between two teams that hate each other. Either way, sign me up.

Other good options: Any game between Philadelphia and Pittsburgh is worth watching. The Rangers and Habs are both strong playoff teams. San Jose’s visit to Phoenix could help determine the West’s playoff seedings. And the Maple Leafs close out their season with a visit to Ottawa, giving them one last chance to be booed by a home crowd.

No thanks: The Sabres visit Boston, a team that will have nothing to play for and will probably ice a roster of AHL call-ups and random guys found on the street. So, let’s pencil the Bruins in for an 8-1 win.

Entertainment quotient: 7/10 — There are some fun matchups here. But would it kill the league to give us more than nine games on the season’s final Saturday?

The can’t-miss matchup: Dallas at Phoenix — This one is shaping up to be a de facto playoff game, with the winner earning the West’s final wild-card spot and the loser going home.

Other good options: The Avs face the Ducks in a battle of 100-plus-point powerhouses. The Flames and Canucks might at least feature a coach fight or two. And the Red Wings visit St. Louis in a game that could make or break their playoff push — and you know that Blues fans would love nothing more than to be the team that finally ends the playoff streak of their longtime rivals.

No thanks: Just for fun, they should intersperse coverage of the Islanders/Sabres game with footage of Thomas Vanek smiling while wearing a Montreal uniform.

Entertainment quotient: 8/10 — That’s probably being generous, but screw it. The season is over. It’s playoff time.

Khalil Mack Is Here to Ruin Offenses and Chew Bubblegum