Everything You Know Is Wrong: Original Six Edition 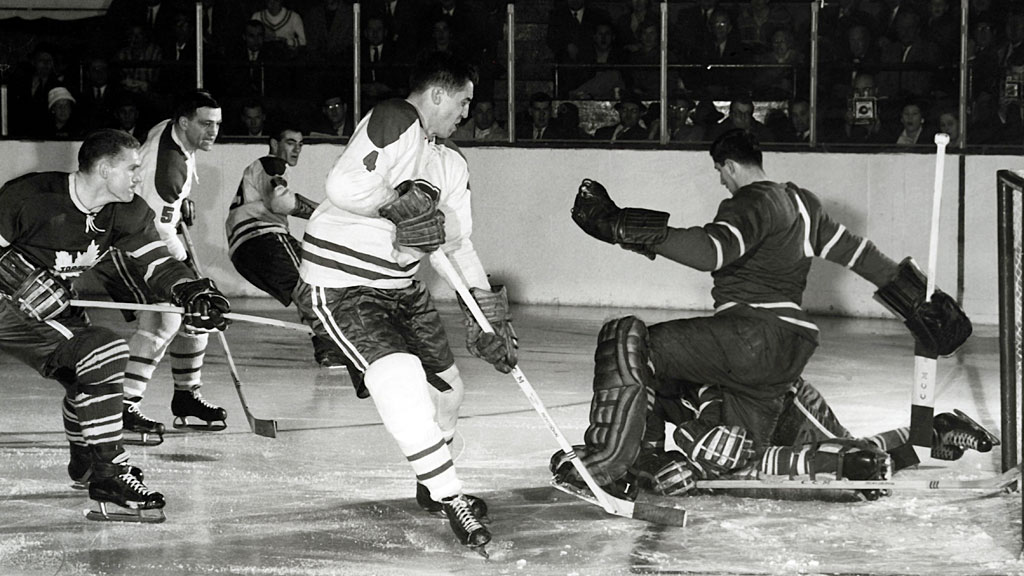 Hockey fans don’t agree on much, but every now and then we let our guard down and a consensus forms. Unfortunately, just because we all agree doesn’t necessarily mean we’re right.

In the Beginning, There Were the Original Six

Every fan knows about the fabled Original Six, because the NHL really gives you no choice in the matter. The Hawks, Wings, Leafs, Habs, Bruins, and Rangers are the six oldest teams in the league, and for many years they made up the entire NHL. The league’s marketing department rarely passes up an opportunity to remind us of that legacy, and to this day, any matchup between two Original Six teams is treated as something special.

But despite what the name would suggest, the “Original Six” weren’t really the league’s original teams. The league had plenty of other franchises come and go during its first few decades, and spent most of that time operating with more than six teams.

The NHL was founded in 1917, following the demise of the National Hockey Association. It started off with four teams, and when the Montreal Wanderers disbanded halfway through the season after their arena burned down, the league was left with just three: the Montreal Canadiens, the Ottawa Senators, and a nameless Toronto franchise that would eventually become the Maple Leafs.

As the years went by, the league saw teams appear in Quebec City and Hamilton. The Bruins were the first American team, joining the league in 1924. The Rangers and Blackhawks followed in 1926, as did a Detroit franchise that would eventually be renamed the Red Wings.

So it took almost a decade for all six of the “Original Six” franchises to wind up in the NHL — and even then, the league also included teams like the Pittsburgh Pirates and St. Louis Eagles at various points. It wasn’t until 1942, a quarter century after its formation, that the NHL finally settled into the six-team league that fans have become familiar with. It would stay that way until 1967, when the league increased to 12 teams to begin what would become known as the expansion era.

Those 25 years were by far the longest stretch of time that the NHL featured the same group of teams, and it was the era that set the stage for everything the league would eventually become. It just wasn’t all that original, no matter what the marketers try to tell us.

It Should Be the Toronto Maple Leaves, You Dummies

Speaking of ancient history, here’s one that’s an old favorite of hockey fans, especially those of rival teams who seem to delight in pointing out that the entire Toronto franchise is based on a grammatical error. What a dumb organization — they don’t even know that the plural of “leaf” is “leaves”!

But it’s just not true. (Well, the part about leaves isn’t. The part about them being dumb is still a matter of some debate.)

While the maple leaf didn’t first appear on the Canadian flag until the 1960s, it had long been a national symbol and was often incorporated into military badges and insignia. When Conn Smythe took control of Toronto’s NHL franchise in 1927, he immediately renamed the team the Maple Leafs. It’s generally assumed that Smythe was honoring the Maple Leafs Regiment from World War I, though it’s also been suggested that he might just have been trying to piggyback of the popularity of the existing Toronto Maple Leafs baseball club.

In either case, “Maple Leaf” was being used as a proper noun. And proper nouns don’t change when you add an “s” on the end to make them plural. After all, if you want Don Cherry and his family to come over, you don’t address the invitation to “The Cherries.” Stan and Scotty Bowman don’t suddenly become “The Bowmen.” And when Ryan Leaf’s family gets together for a reunion, they don’t start referring to themselves as “The Leaves.” They just fire up the barbecue and toss the ol’ pigskin around, mostly to players on the wrong team.

And in the same way, a group of more than one Maple Leaf doesn’t become the Maple Leaves. So stop it with the sick grammar burns, fans of other teams, because Toronto has this one right. You’ll have to find something else to make fun of the Maple Leafs about. Somehow, I suspect you’ll manage.

It’s not hard to trace the roots of this one. We can even nail down the date: April 20, 2004. That’s the night Lalime and the Senators went into Toronto to face the Maple Leafs in Game 7 of their first-round series.

It was the fourth time in five years the two teams had met in the playoffs, and the Leafs had won all three previous meetings. But this time, it was going to be different, because the 2004 Senators had built their entire team identity around finally beating the Maple Leafs. They had custom-made hats printed up for the series that read “Slay the Dragon.” Captain Daniel Alfredsson guaranteed victory. Before Game 7, new owner Eugene Melnyk vowed, “We’re gonna kill ’em.” Game 7 was going to be the night the Senators erased years of misery by finally beating the hated Maple Leafs.

And then the game started. Lalime gave up three first-period goals, including two brutally soft ones to Joe Nieuwendyk. The last of those came with just seconds left, and sent the Senators to the locker room down 3-0. Lalime was pulled, the Leafs held on for an easy win, and Lalime never played another game for Ottawa. His reputation was set. To this day, wherever a goalie gives up a softie in a crucial playoff game, somebody somewhere will mutter, “Nice one, Lalime.”

All of which is why it may surprise you to click on this list of the best career playoff goals-against averages of the Original Six era and beyond.

That’s right. Patrick Lalime, whom everyone remembers as a playoff choker, owns the best postseason GAA of any goalie in the last 70-plus years. Ahead of Martin Brodeur, ahead of Dominik Hasek, ahead of Ken Dryden, and Patrick Roy. And it’s not even all that close — he’s a full quarter-goal ahead of the next name on the list.

Now some of that is the dead puck era, and some is because Lalime played on strong defensive teams. But even if you sort by save percentage instead, he only drops to fourth. The guy was good. And if you don’t believe me, ask the 2002 Flyers, who managed just two goals against Lalime over the course of a five-game series.

Lalime never led the Senators to the promised land (or past the Maple Leafs) mainly because the team’s best players couldn’t score when it counted. But he picked the worst possible game to have one bad period, and that was enough for him to become a punch line. Hockey can be a cruel sport.

The Canadiens Dynasties of the ’50s, ’60s and ’70s Happened Because of a Rule That Gave Them All the Best French Players

This one comes up whenever a Habs fan starts droning on about all the Stanley Cups the team has won, which is to say it comes up all the time: The Canadiens won so many championships only because of an NHL rule that gave them first dibs on the era’s greatest French-Canadian players. For a team built on the backs of French legends like Rocket Richard, Jean Beliveau, and Guy Lafleur, it was an almost impossibly unfair advantage.

And there is some truth to the story. Just not as much as you’ve been led to believe.

The league really did have a rule that gave the Canadiens first crack at Quebec-based players. It was originally put in place in the 1930s and 1940s, and was later brought back in 1963 with the debut of the amateur draft. (You can find a much more detailed history here.) The rule wasn’t just for Montreal — other teams were granted territorial rights of their own. But because so many of the team’s best players ended up being French Canadian, most fans remember the rule only as it applied to the Habs.

But there’s a key detail that often gets left out: The Canadiens could pick only from players whose rights weren’t already owned by another team. That didn’t leave much to choose from. And in fact, virtually none of the key pieces of Montreal’s Cup-winning teams came from the team exercising its territorial rights. That includes Richard, Beliveau, and Lafleur, all of whom were acquired by traditional means.

The Canadiens did have an unfair advantage that led to several Stanley Cups, but it didn’t come from the rulebook. It was their GM, Sam Pollock, who spent the better part of two decades repeatedly ripping off other teams in lopsided trades. Unfortunately, that doesn’t work as well as far as conspiracy theories go.

If a Game Goes to Overtime, Both Teams Are Guaranteed a Point

Since 1999, the NHL has been awarding the loser point, which gives teams that lose in overtime or the shootout a single point in the standings. It’s been a divisive innovation. Some fans like it, while the rest of us are right.

At least we can all agree that the losing team always gets that guaranteed point. But as it turns out, that’s not actually true, thanks to an obscure NHL rule that almost never comes into play, and that most fans don’t know about.

That one exception kicks in under a rarely seen scenario: a team pulling its goalie for an extra attacked in overtime. The situation is specifically addressed in rule 84.2 and was originally put in place to prevent teams from turning overtime into a farce to try to get a no-risk second point late in overtime. That wouldn’t happen in the shootout era, but a team could still theoretically be in a position where its playoff hopes were riding on a win before the shootout, because regulation/overtime wins (ROWs) are a standings tiebreaker.

My favorite part of the rule is that it even includes a clause that prevents teams from pulling their goalies and then returning them to the ice on the fly. That sounds bizarre, but in theory, a team could pull its goalie and then instruct him to jump back on the ice if the other team was about to score into the empty net. I love that somebody actually thought of that loophole and made sure it was covered in the rules.

And in case you’re wondering, yes, this obscure rule has come into play at least twice. As I was reminded by advanced stats icon (and shameful loser-point apologist) Tyler Dellow over the weekend, the Canucks surrendered an empty-net goal to the Oilers in an April 2000 game. The Kings also managed the feat in a 2003 loss to the Blue Jackets.

Both times, the losing team left with zero points that night, the way the hockey gods intended it.

“I cannot speak about Jason Kidd and Lawrence Frank because I do not know it,” said Jackson, who said he still speaks with Kidd. “But everybody has to know who is in charge, and that’s the head coach. He’s the guy calling the shots. I’ve never seen any of the Pips trying to lead. That’s Gladys’ role. Let Gladys be Gladys.”