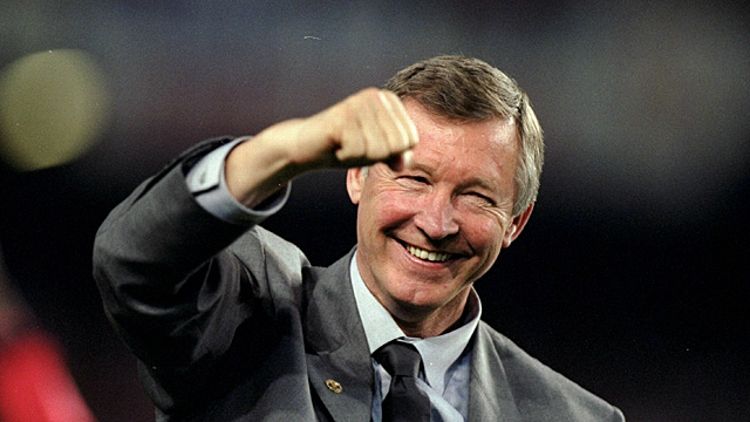 I left Manchester 10 years ago, after 14 years of living in the city. Through that entire time, Sir Alex Ferguson has been the manager of Manchester United. And in a few weeks’ time, he won’t be.

Perhaps it’s that final symbolic severing of a particular connection to a city I didn’t stick with that’s the reason I’m sitting in my office in Brooklyn feeling surprisingly maudlin this morning. When I moved to Manchester in the late 1980s, Ferguson, along with Factory Records founder Tony Wilson, was already one of the iconic faces of the city, and for me that iconography has grown more distinct with time and distance.

There are casual Manc acquaintances from my time there who I haven’t seen in years, except in the odd pixelated glimpse of filled-out faces or shots of their children (filtered by Facebook and my own squinted puzzlement as to who they are and where I know them from). But cutaway shots of Ferguson “reacting” have been a continual part of the texture of my life, wherever I’ve been in the world. The loss of that saddens me, regardless of how I, a non-United fan, might feel about the phenomena he reacted to. Over time, I came to experience watching Ferguson at an affective level, somehow distinct from the narrative of games. Knowing he’d be animated on the touchline was like knowing the color green existed.

And more, perhaps, than individual games, those cutaway shots will be my strongest memories of Ferguson. A generation and more have been reared on the Noh theater of these interstitial moments in and around games where the United manager would do his thing — or pointedly refuse to do his thing. From the slumped figure chewing gum furiously in the shadows at the back of the Old Trafford dugout, to the foreman’s stride down the touchline at halftime (were that the only succession criteria, Mark E. Smith should get the nod); from the ostentatious technical box timekeeping, to the Cheshire-Cat-abroad of his forced appearances on a UEFA press dais — I know these moments and gestures as intimately as I know the idiosyncrasies of my own family members.

If you’re reading this, you’ve probably seen these gestures countless times — they belong to the global spectacle of the game — but they emerged from a very particular place and time that I’m drawn back to this morning. I’m trying to remember the Manchester I arrived into in the late ’80s, where the first rumblings of the spectacular revolution-that-would-be-televised came in the form of Ecstasy hitting the stadium terraces, loosening up what had long been a dispiriting and aggressive game-day experience. The city was slowly loosening up, too, as the draconian licensing restrictions under the born-again chief of police James Anderton began to ease. The city center was about to undergo a boom in population; European-style cafe bars were symbolically replacing the red brick of Manchester warehouses with airy glass frontages, while the upper floors were being refurbished as New York–style lofts.

At times, it felt as if only the pubs held out. Blocked off, stained-glassed, dark-wooded throwbacks to another era, they’d at one point been the hub of community life — a community that had fractured and dispersed around them as the industrial base collapsed. Yet the pubs of Manchester were about to be transformed, too, as Sky satellite TV license packages turned them into venues for those economically disenfranchised from watching the local team into gathering places to watch televised representations of that local team — and indirectly celebrate the globalization of that disenfranchisement. Front and center in those representations was Ferguson, now experienced by the vast majority of fans not as a figure on the other side of a field, but in the intimate distance of him running through his familiar onscreen choreography — part of the visual tempo of our new modern sporting lives. The honorary Mancunian ushered his adopted city into the new order of things.

Watching the 1999 Champions League final in the Lass O’Gowrie pub in Manchester City center, the last-minute deluge of thrown beer glasses ceased for a moment as United fans around me hushed enough to hear Ferguson’s “Football … bloody hell!” assessment of his side’s last-minute winner. Then the inhabitants of the pub took to the streets to revel in the latest incarnation of the city Ferguson had apparently handed them.

Manchester’s an oddly impermeable place to outsiders — even the city’s art museum has a section devoted to Manchester “attitude.” I spent my time there desperately wanting to be a part of it, and yet failing to notice the unrequited nature of my crush on it — Manchester’s excess of civic pride in its excess of civic pride may transcend the industrial revolution, the splitting of the atom, the invention of the programmable computer, its guitar bands, and, indeed, its football, as its gift to the world. So it was no surprise that the red half of Manchester took its time to embrace the outsider Ferguson. Yet while I can remember other aspects of my early years in the city, it’s hard to remember those early moments where supposedly Ferguson was a Mark Robins goal from losing his job. I remember that goal.

I remember Ferguson’s predecessor, “Big” Ron Atkinson … and even dimly remember the scandal around Tommy Docherty at the end of his reign (when I was a very little kid). So objectively I must remember a time when Ferguson was on shaky ground in Manchester. But simultaneously I can’t remember a moment when Ferguson did not seem part of the bullish version of Manchester Tony Wilson boasted about.

Ferguson is perhaps the last of a longer tradition of Scottish footballing men with a deeply ingrained relationship to working-class culture. Or so runs the origin myth. Crucially, though, Ferguson came slightly later than the holy trilogy of great Scottish club managers (Busby, Shankly, Stein, celebrated in Hugh McIlvanney’s masterful documentary The Football Men), so his was not a character directly forged in the mines of Lanarkshire, but his schooling in the socialist values of that milieu was genuine enough in shaping his identity. How he exemplified those values in the later days of Rock of Gibraltar and his strategic pronouncements in the Glazer era will be deservedly scrutinized when his legacy is assessed. But even as the money poured into the Premier League, and even as he benefited directly from those riches, Ferguson was able to profit from an assumed connection to an earlier moment. Even as his team and the city it played in transformed into an uncertain but giddy future, the presence and persona of Ferguson became more deeply embedded in the largely mythical accounts of the city and political landscape that had preceded it.

In the late 1990s, telecom company Vodafone sponsored Manchester United. Their tagline at the time was “You Are Here” (ironically, one of the favorite beleaguered City fan chants at the time was the so-called “invisible man” song, with its refrain, “We’re not really here”). By the time that campaign started, though, Manchester United were well on their way to not really being “here” but “everywhere.” “Here” was a placeholder, and soon would come the Glazers, leveraged buyouts, and NYSE flotations to spin the club and the city further into abstraction, in the global soccer era. For better or worse, Ferguson has been there before, throughout and after this paradigm shift, waving the years through, and berating them, and checking his watch as they passed. They should play an extra minute of injury time on his last day. I’ll be watching on TV.