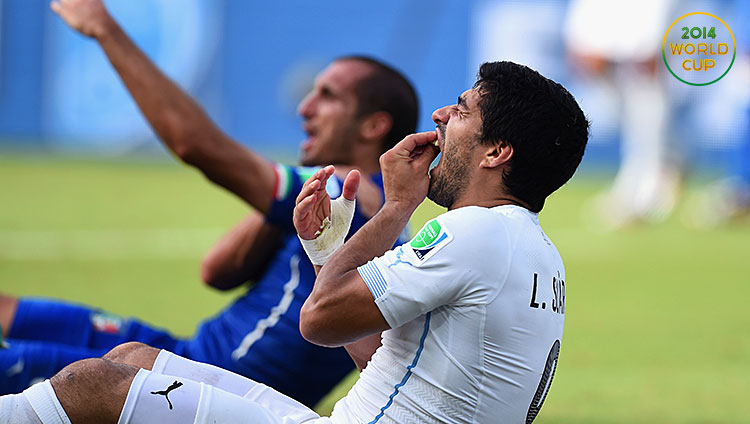 Chris Ryan: Hey, Mike! Hungry? It sure looks like Uruguay forward Luis Suárez just bit Italy defender Giorgio Chiellini in a World Cup match. Uruguay, already up a man, went on to win the match and advance to the Round of 16.

This is the third time Suárez has taken his Dracula imitation a little too far. In 2010, while playing for Ajax, he chomped on a PSV player.

In 2013, as a Liverpool player, he famously chowed down on Chelsea defender Branislav Ivanovic’s arm. He was later suspended 10 games for that incident.

Two questions for you. What the hell? And what now?

Mike L. Goodman: What the hell indeed. Usually when you say you can’t believe something happened it’s because it is so unfathomable that it would never cross your mind. This is unbelievable for exactly the opposite reason.

It’s just so NARRATIVE. If you read Wright Thompson’s amazing ESPN piece about Suárez in the run-up to the World Cup, he spent time ruminating on how Suárez is put together and what makes him bite people. I mean, there was an actual amazing piece about what makes Luis Suárez bite people! Thompson described how in desperate moments, when Suárez might feel his life and livelihood slipping away, he snaps. And it happened again. On the biggest stage possible. It’s not that you couldn’t write this story, or that nobody would believe you. It’s that this is exactly what you would write.

As for what happens next: I’ve found that guessing what FIFA is going to do is a pretty futile endeavor. This is a governing body that awarded the next two World Cups to Russia and Qatar. I’m not sure that relying on them for sound decision-making in somewhat uncharted territories is a high-percentage play. Though I guess “what next” applies to Suárez beyond the World Cup as well, right? This has to have bigger implications for his career and his club, right?

Ryan: Oh, so glad you brought up his club. Rumors of Suárez’s departure from Liverpool — the team I cheer for, by the way — had just started cranking up from dull hum to window-frame-rattling. His father-in-law reportedly said that Suárez had nothing left to prove in England, and that he should move to one of the Spanish powerhouses, Real Madrid or Barcelona. And, interestingly enough, Uruguay coach Óscar Tabárez’s postgame comments reportedly included this little nugget:

Uruguay coach suggesting questions about Suarez bite are because he's the “ the preferred target of certain media.''

That’s a real-life subtweet of the English media, if you need me to spell it out for you. This is how I see this going. The English soccer press goes full “URUGUAY’S CANNIBAL SHAME” for the next week. Suárez will either be suspended or play on in this tournament under a cloud of controversy, and shortly after the Cup, we’ll start seeing stories about how the English media is making life in England impossible for Suárez, and, why yes, he will take you up on that offer to move to Barcelona or Madrid. These stories will be … in the English media.

Back to the matter at hand, though. What you said about the Thompson piece and Suárez buckling under pressure is interesting. But Bill Barnwell just posited a different angle to me, over in the intellectual salon that is Gchat. I’ll let him speak for himself here.

Bill Barnwell: I wonder whether Suárez is using his bites as a tactic to try to get somebody sent off in a desperate moment. They’ve all come late in matches against rival opposition. His first bite came in stoppage time of a 2010 scoreless draw between Ajax and perennial title contenders PSV Eindhoven, moments after Suárez had seen Ajax teammate Rasmus Lindgren sent off. Next, in 2013, he bit Branislav Ivanovic late in an April match between Liverpool and Chelsea that had Champions League implications. Liverpool trailed 2-1 at the time. On Tuesday, obviously, Uruguay was minutes away from being eliminated from the World Cup when Suárez bit Chiellini. It’s fair to say that Suárez could probably find easier ways of getting somebody sent off, but it’s also worth noting that he hasn’t been carded for a single one of these incidents and his team has scored afterward in two of the three games.

Ryan: What do you think about that? Is Suárez playing the most dangerous game? I don’t mean hunting other humans — I mean risking his own eligibility to try to get an opposing player sent off.

Goodman: Seems reasonable. Though I don’t think those two armchair diagnoses are mutually exclusive. He might be trying to get somebody sent off. But he does so in a way that is so beyond acceptable behavior that it suggests, perhaps, that as the pressure builds, he loses the ability to distinguish right from wrong. That said, if it is a planned tactic, one that he has now been caught going to three times, he’s either really dumbly continuing a trick that hasn’t worked, or we have to wonder how many times he’s actually bitten a player and gotten away with it. Otherwise you’d think maybe he’d try another trick.

Absurd as all of this is, and it is completely ridiculous, I would like to take it slightly seriously for one moment. This is just too good of an example of why it’s such a bad idea to treat on-field performance as redemption for other issues.

There were lots of people, both fans and in the media, who treated Suárez’s incredible season as some kind of proof of redemption for his biting suspension (and suspension over racist remarks leveled at Patrice Evra — how have we gotten all the way here and not mentioned that yet?). As if playing amazingly well somehow makes up for biting people. And now what? Is he un-redemptioned? Dis-redemptioned? Athletic achievement and being a not-horrible person are two separate things. Being good on the field doesn’t make up for bad actions, nor, as we saw today, does it mean a player won’t have future bad behavior.