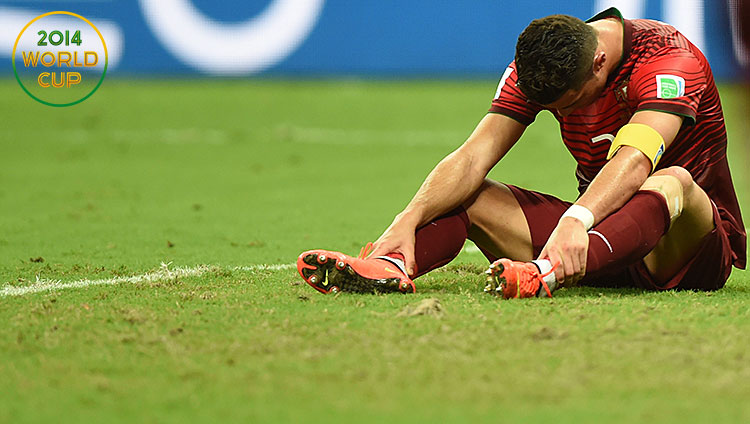 If Cristiano Ronaldo didn’t exist, we’d have to invent him.

Prior to the 95th minute of the United States’ game against Portugal, Ronaldo was merely — merely — the greatest player in the world not named Messi, and even then maybe simply the greatest player in the world, an impossibly sculptured example of a certain suspicious brand of masculinity native to Iberian beaches and Armani Exchange stores, an athlete whose celebrity is so weird that he posed on the cover of Italian Vogue naked, who capped a come-from-behind bid for the most glorious trophy in Europe by immediately taking off his shirt. Ronaldo was a symbol for everything the ordinary fan detests in sports superstars: vanity, prettiness, arrogance, transcending the game itself.

But at the end of Portugal’s game against the U.S., a switch flipped when Ronaldo — who was so obviously playing injured that every time he hit the grass, he seemed to consider staying there forever — put a parabolic cross on his teammate Varela that couldn’t have been more precise if it had grown out of the striker’s head. American fans had the experience that European club fans have been having for years now. Ronaldo went from being a famous person, pompous and delicate and chatty, to being something far more interesting. He became a villain.

Not everyone you dislike is a villain. A villain has to be worthy of your hatred and animosity; he — or she, but for our purposes here, he — has to be your equal or your better.

You have to begrudgingly admire him, even as he makes your life miserable, kidnaps your dog, strands your wife at the top of a very tall tower, beats you to within an inch of your film-franchise-sustaining life. Or messes up your soccer team.

Ronaldo may be the type of person who seems more like a wax sculpture of himself than a wax sculpture ever could, but if you don’t respect him at this point, you’re deluding yourself. I praise Cristiano Ronaldo because he broke my heart.

I’ve always found him too talented to be detestable, but now my feelings toward him have swung even more — he’s given the United States men’s national team a new quality. If American soccer can pull a feat that spectacular from Ronaldo, then American soccer requires that kind of feat to be beaten, which is a nice thought.

Because that’s the key here: Ronaldo is serving an essential part in the narrative. Sports on a macro level are a simulation, like art; they’re made up of people trying to create something worth remembering, against odds that are high enough so as to make the outcome of that something happily uncertain. Ronaldo’s role here, from the perspective of a U.S. fan, is that of the odds — we’re the force, and Ronaldo’s the immovable object. It would still be sports if the resistance came from 11 nameless faces atop placebo bodies, but it becomes something great when the resistance comes from a guy as comical and amazing as Ronaldo.

The beauty of the pro wrestling heel, and the reason he’s the patron saint of the heel form, is because his status as a heel has been agreed upon by everyone, including the heel himself — nobody’s confused about his moral place. Same with movies; you may have an Anton Chigurh fan club, but unless you’re a sociopath, you don’t genuinely believe he’s admirable. To achieve that kind of dazzling villainy in sports, for which there’s no true moral compass if you stay within the rules of the game, you have to be so talented, and so ridiculous, that you achieve a sort of anti-moral critical mass wherein nobody but those who benefit the most from your achievements would dare suggest you’re the one worth rooting for.

Ronaldo has this in a way that few others do, and he should be applauded for it. Even if it put you in your room on Sunday night, in the dark, listening to the same Lana Del Rey song — maybe “Sad Girl” — over and over and over. Ronaldo may do good things in real life, but on the field, he’s the best kind of evil.