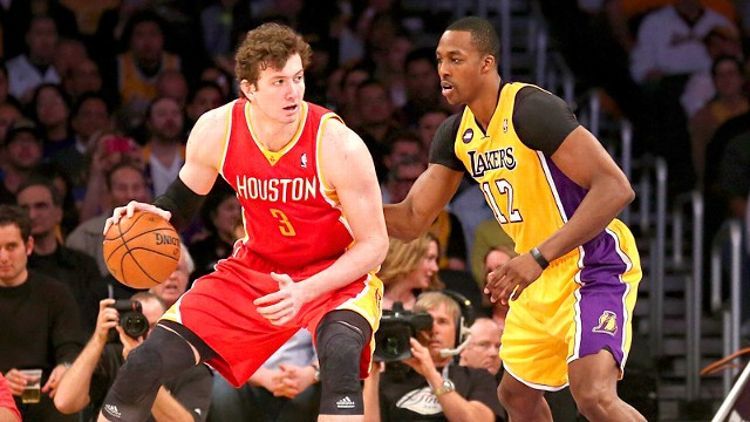 When Dwight Howard made his move to Texas, it gave the Houston Rockets the second star the team had been hoping to acquire since last season’s trade for James Harden. The presence of the seven-time All-Star center is certainly a boost to the organization’s title aspirations, but because of Howard’s arrival, incumbent starter Omer Asik — a vital part of last season’s success — now finds himself in basketball limbo, unsure of whether his next stop is a new team, a new role, or a new position. How the Rockets proceed with the Turkish big man will determine how, and most importantly how well, the team will play next season.

The pre-Howard Rockets ran early and often, spreading the floor and finding good looks as early as possible in the shot clock. It worked, too, as the team ended up sixth in offensive efficiency, according to ESPN.com. If the Rockets want to continue to burn the lights out on the scoreboard, trading Asik for, say, the Pelicans’ Ryan Anderson, is their move. It’s a deal that was supposedly discussed right after Howard’s arrival in Houston, and it would turn the Rockets into a souped-up version of the 2010-11 Orlando Magic — the 52-win team that featured Anderson bursting onto the scene as a devastating offensive force, capable of stretching the floor with an accurate outside shot while also being a pest on the offensive glass.

By swapping Asik for a bona fide long-range bomber who has converted 38.4 percent of his 3-point attempts during his career, Harden, Jeremy Lin, Chandler Parsons, and the rest of Houston’s perimeter players would not only have ample space to operate, they’d also have a dangerous pick-and-pop partner to put immense pressure on opposing defenses. Howard, meanwhile, would enjoy the freedom of posting up with four teammates capable of pulling their defender away from the paint. It’s probably not a stretch to suggest that a Howard-Anderson-Parsons-Harden-Lin (or Patrick Beverley) quintet would be among the most potent in the league.

The problem with such a trade is that without Asik in the fold, there would be no semblance of a defensive presence behind Howard. It would just be a repeat of last season, when the Rockets defended well with their lone rim protector on the floor (101.3 defensive rating, a top-10 ranking) but collapsed to Cavs-level bad (107.0, 27th) without him. If the Rockets feel that young forwards Donatas Motiejunas or Terrence Jones can improve enough this offseason to be something close to Anderson lite, keeping Asik in a reserve role might be a better option than a trade.

Rotating Howard and Asik would guarantee that the Rockets always have at least one dominant (assuming Howard’s health and motivation improve) defensive center on the court at all times. Houston would also be protected if their star big man suffered an injury that would otherwise cripple its season. Keeping Asik would also allow Houston to limit Howard’s minutes in the regular season — similar to how Indiana did with Roy Hibbert — to protect his health while also using more minutes to boost Asik’s morale in the meantime. The balance Asik would bring in a reserve role wouldn’t be as exciting as parting with him for a player who turns the team into an offensive juggernaut, but having two defensive stalwarts trading off as the anchor of the defense would be a luxury for the Rockets that no other team would have.

Asik wouldn’t have to be used strictly as a straight swap for Howard, either. At times, whether out of desire or necessity, the two could be played together. Looking at the front lines Houston will have face out West, “necessity” seems to be a factor. Here’s a rundown of opposing frontcourts the Rockets will see in the regular season and playoffs:

Given that list of names, the third option — starting Asik alongside Howard — becomes the most intriguing of them all. With good feet and excellent anticipation skills, Asik can certainly handle guarding (and maybe even shutting down) the vast majority of opposing power forwards, particularly the ones he’s likely to see in the postseason. As a duo, the Howard-Asik back line would make it a nightmare for opposing offenses looking to get to the rim. No matter what an opposing offense runs, they can expect at least one shot-altering 7-footer to be planted just a few feet from the rim. If paired together for extended minutes on a nightly basis, Howard and Asik could easily vault the Rockets from 16th in defensive efficiency last season to the top five overnight, with the potential, thanks to solid perimeter defenders like Parsons and Beverley, to be the best overall unit in the league.

Any questions surrounding the effectiveness of an Asik-Howard frontcourt would be on the offensive end. It would seem on paper that two traditional big men with little range outside the paint would slow down Houston’s fast-paced, drive-and-kick attack. Yet in the 228 minutes (small sample size alert!) Asik paired with backup center Greg Smith last year, the two put up a 109.0 offensive rating, which would be good enough for third in the NBA over an entire season. It’s a promising number, but not one that provides ironclad proof that Asik and Howard would be destined for greatness. Smith and Howard aren’t the same type of player and will be asked to do different things. How well Howard performs certain tasks will be a key factor in determining whether he can pair with Asik for long periods of time during meaningful games.

Smith’s job while on the floor with Asik was far from glamorous. The young big man was asked to make what’s called the “rim run” in transition every time the Rockets moved from defense to offense. In layman’s terms, that just meant Smith was required to run straight toward the hoop, then vacate the paint opposite the ball handler if he didn’t receive a pass. It’s the same role that Howard will likely be asked to occupy, with one exception — he’ll be allowed to post up. Before scoffing at the simplicity of this responsibility, realize that Smith sometimes made this run dozens of times a game before receiving a single pass. It’s not a stretch to suggest that if the mercurial Howard doesn’t receive ample touches for running the floor every possession, his effort may wane and start to slow down the entire break.

Howard’s willingness to be the first man down in transition is also important because it allows Asik to act as the trail big — the second frontcourt player coming down in transition, trailing the break, ready to carry out a variety of actions. To compensate for the lack of shooting in the Smith-Asik frontcourt, the task the Rockets assigned to Asik was to act as something of a fulcrum higher up on the court. After catching a reversal pass from a guard, either in transition or the middle of a half-court set, Asik would move the ball toward the opposite side with the dribble, engaging his teammate on the wing in a dribble handoff or “DHO” (in a simplistic sense, a DHO is basically a legal, moving version of a pick-and-roll). Because his teammate on the wing is having the ball dribbled at him rather than passed, it is virtually impossible for the defense to send the receiver of the DHO to the baseline (or “down” him) because any overplay would lead to Asik delivering a backdoor pass for a layup. This nuance allows the ball handler to go middle (a good thing for an offense in general) and for Asik to hand the ball off and roll to the rim on the empty side of the floor, like this:

It’s important for a frontcourt without a big man who can stretch the floor to avoid being downed. If the ball handler was forced to drive baseline while Asik dove down the middle of the lane, the inability for the opposite big man to put pressure on his defender with the threat of a jumper turns the paint into a giant jumble of bodies. But as you saw in the above clip, Asik’s willingness to carry out this role — moving the ball side to side via the dribble — eliminates such situations and allows the Rockets to run an effective offense. But that’s only possible if Howard commits to doing his job first.

Howard’s preferred method of operation, post-ups, also shouldn’t be a problem. In the NBA, everything a team runs on offense essentially boils down to actions and alignments. The ideal alignment on any post-up is to have three 3-point threats stationed around the arc — roughly top of the key, opposite wing, and rim-extended in the opposite corner — while having one player in the opposite short corner who has prime real estate to battle for offensive rebounds.

Asik has ranked ninth, fifth, and 20th the past three seasons in offensive rebound rate, according to ESPN.com, and when asked to play that short-corner offensive rebounder, he could be an absolute nightmare on the glass.

Though the spacing works out OK for Howard post-ups, dribble drives will be another story. Simply put, there just isn’t enough room near the basket for six bodies (two big men, their defenders, the attacker, and his defender) to maneuver near the basket area to produce consistently good results. Take this Jeremy Lin drive, for instance:

Lin gets to the paint, but once he’s there, no space exists for him to either finish at the rim or find an open big man for a drop-off. The lane is too packed. Another example is this Harden 3 from a game this spring against the Nuggets:

This time everything is so clogged that Harden skips the notion of driving entirely. Being put in too many situations like this will take away Harden’s greatest strength — his ability to draw fouls. In general, a Howard-Asik frontcourt may limit Harden’s ability to attack so much that the dominant actions for that unit will be Howard post-ups and quick dribble handoffs after ball reversals. And how much good does an imposing defensive frontcourt do Houston if it marginalizes its best player?

These are the types of questions now facing the Rockets’ front office and coaching staff as they mull over the best way to incorporate Asik. So while Howard’s arrival may have brought the Houston organization to the doorstep of championship contention for the first time since the mid-’90s, it’s his fellow frontcourt counterpart who holds the key to unlocking the Rockets’ potential.