With Barca Out of the Way, Jose Mourinho’s Moment Arrives 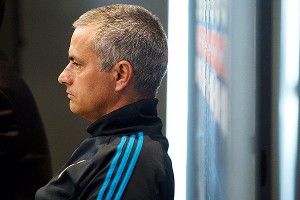 Real Madrid hired Jose Mourinho to do two things: Knock FC Barcelona off their perch and deliver the club’s 10th Champions League title. With this weekend’s 2-1 victory over Barcelona, Mourinho took a significant step toward delivering the first part of his mandate, as Madrid now have a seven-point lead in La Liga with four games remaining. For his next trick, Mourinho needs to overturn a 2-1 deficit to Bayern Munich in the second leg of their Champions League semifinals tie Wednesday. If he can do this and make Real Madrid champions of Europe, he will snatch two crowns from Barcelona in one season.

Mourinho’s most unlikely achievement at Real Madrid has been convincing the world’s richest club that it is an underdog. Mourinho’s us-against-them philosophy works best with a team of grafters and journeymen (think Esteban Cambiasso) like he had at Inter Milan or talented but underachieving players like he had when he first went to Chelsea (Damien Duff). When he arrived at Madrid, it was the first time he had a team of players who had reached the game’s pinnacle without him (Cristiano Ronaldo). In a little under two seasons, Mourinho has convinced the team that referees are against them and that there is a pro-Barcelona conspiracy in Spain and throughout Europe. The players have bought into Mourinho’s paranoia and the results might soon start to show in Madrid’s trophy cabinet.

Madrid could not have chosen a better foil for Barcelona than Mourinho, because Mourinho seems clinically obsessed with Barcelona’s destruction. No matter where the Portuguese manager goes, he has had a bull’s-eye on Barcelona. Mourinho seems to find Barcelona’s holier-than-thou attitude toward football offensive. And it doesn’t help that the Camp Nou crowd mocks him and chants “El Traductor” whenever he visits the stadium, a slur that goes back to his days as translator for then Barca manager Bobby Robson.

All this has molded Mourinho into a one-man Barcelona wrecking crew. He knows how to play against them and he knows how to wind them up. Whatever is said about Inter Milan’s defeat over Barcelona in the semifinals two years ago, whether you blame it on volcanic ash or dodgy refereeing, Mourinho doesn’t care. Nor does he care that in 11 meetings against Pep Guardiola as Madrid manager, he has only won twice. He knows that last season they won the Copa del Rey and this season are on their way to winning La Liga.

The Mourinho brand is about winning. Nothing else matters. When Mourinho came to Madrid he was, for the first time, under pressure to play a certain way. This is, after all, the club of Di Stefano, Puskas, Raul, and Zidane. For once, he deviated from his trusted formula and in his first match against Barcelona, Mourinho tried to play Barcelona at their own game and play an open match. The result was a 5-0 defeat. Since then, Mourinho has changed Madrid to a counterattacking team. This past weekend, Madrid allowed Barcelona to have more than 70 percent of possessions and still came away as victors. And even though the convenient narrative is that Barcelona plays the most entertaining brand of football, it is Real Madrid who set the all-time record for goals scored in Spain, with 109 this season.

Mourinho was able to overcome the Barcelona hurdle and win over the Madrid crowd because he is a shrewd reductionist who boils the game down to wins and losses. He doesn’t put much stock in the abstract notion of playing beautifully or entertaining the crowd. His behavior is purposely antisocial, his remarks to the media strategically inflammatory. Wednesday against Bayern Munich, Mourinho has Real Madrid on the brink of the Champions League final for the first time in 10 years. If he can overturn the 2-1 result from the first leg, Madrid would be a safe bet to win in the final, no matter the opponent. Mourinho does not care if you love or respect him. Because, let’s face it, affections and allegiances change frequently. The only indisputable truth is what sits in the trophy cabinet, and — more than anything else — people love a winner. And all Mourinho does is win. No matter what.