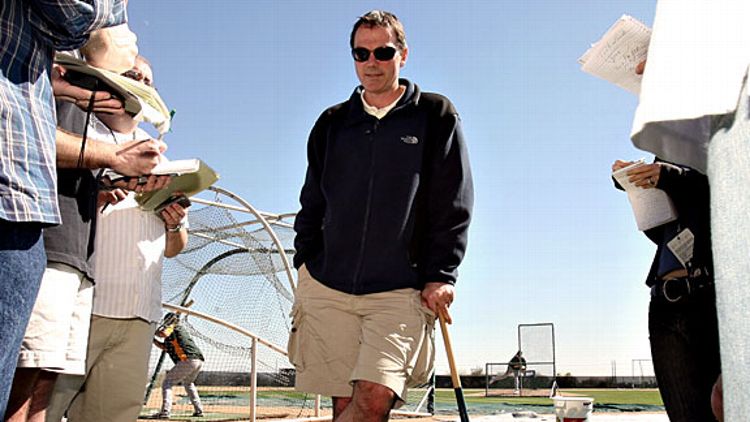 Entering HOOPMIXTAPE.COM is like being presented with an extensive wine list by a discerning sommelier. “May I interest you in the top high school dunks from AAU tournaments this week?” Why yes, I would like that. Here’s the problem — after you finish one glass of wine, the sommelier starts pushing more glasses on you. “Would you like to see John Wall cross three people over?” Yes, I would like that. “OK, how about Brandon Jennings throwing the ball off the backboard to himself for a dunk?” Yes, I’d like that, too. “Have you heard of Shaquille Johnson? He’s quite good.” Yes, yes please. Next thing you know, it’s 2 a.m. and you’ve been watching videos of people getting dunked on for the past 36 hours.

Here is the real-life scene I like to imagine: Billy Beane is at a house party in northern California. People in sweaters are drinking wine and talking about gluten. Friends of friends. More bottles are opened. The cheese plate starts looking ragged. Pockets of loud laughter. A small conversation takes place by the bug lantern. “Who would you want to play you in a movie?” someone asks. The red-haired guy responds “Carrot Top!” People laugh. Then the next guy says “Carrot Top!” People laugh harder. Then Billy Beane says, “Kevin Spacey.” And people say, “Oh, I could see that.” Billy Beane smiles. –fin-

Take 14 minutes to listen to the HBR IDEACAST and you will feel 10 times smarter. It’s IQ HGH — head growth and all. Here’s a good one to start with: Pricing Secrets of Ticket Scalpers.

This week’s big loser? Bill Simmons. Just so he has some company, lets add all Clippers fans, all lovers of violent dunks, you, me, and pretty much everyone who doesn’t have the first name Timofey or the last name Mozgov. Why? Blake Griffin has taken up surfing.

Here’s Blake, riffin’ about waves and whether his contract prohibits Point Breakin’. He jokes with Henry Abbott about how it’s not a violent hobby and he probably won’t get injured. But here’s the thing — the Clippers shouldn’t be worried about injury. They shouldn’t worrrrrry ay-bout an-y-thing maaaaan. (Read the rest of this in a SoCal voice so I don’t have to keep typing like that.) Chill out, Clipper suits. He’s just your franchise player. He just wants to chill and catch some waves. See the sunset. Be one with the aqua.

We know Blake always toed the line between mellowed out and ferociously explosive. This new surfing habit is going to push him over the edge. Just to drive it home, let’s play it out via game show —

GOALIES, because now they’ve got more to think about when lining up to stop a penalty kick. According to psychologists at the University of Amsterdam, goalies dive right twice as often as they dive left when they’re under pressure to make a save. The headline of the article on the study is pretty basic — “Under Pressure, Soccer Goalies Tend to Dive Right.” OK, I get it. The article could also have been given the headline “How A Study About Dogs’ Tails Affects the World Cup.” That’s the better sell. Either way, it’s a good read.

The “McNABB IS OLD” argument. Donovan McNabb will turn 34 in November.

Here’s a list of people he is younger than: