Why Won’t Jacksonville Let Us Meet the Bortles? 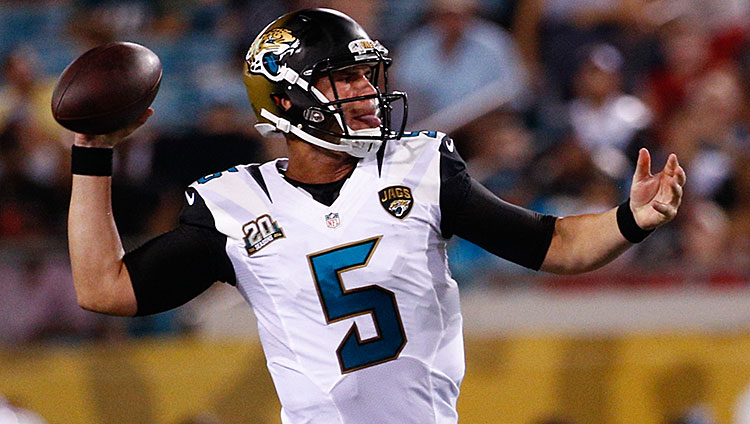 Two weeks into the NFL preseason, things are playing out as they usually do: The eyes of football fans across the nation are cast toward Jacksonville, Florida. Blake Bortles — third overall pick in the 2014 draft, runner-up for the lead role in this year’s major motion picture Hercules, remarkable case study in alliterative baby naming — has put forth two strong preseason performances, and Bortlesmania has firmly gripped the nation.

Through two preseason games, which are, of course, the ultimate and exclusive barometer of a quarterback’s abilities, the Great New Rookie Hope has gone 18 of 28 for 277 yards, a plum 9.89 yards per attempt. These are good numbers, and, in compiling them, Bortles has made some impressive throws, including a particularly nice look-off that culminated with an over-the-shoulder toss down the left sideline.

Following that second showing, which came against the Bears in a [result redacted because it doesn’t matter], commentators are wondering if the Jaguars are unwise to sit their newly hatched Adonis, which has been their plan for the season ever since somebody in the front office looked at the broken and shattered mannequin that is Blaine Gabbert and thought, Hey, maybe we’re kind of responsible for that?

Even acknowledging the likelihood that Jacksonville would miss the playoffs with a Super Saiyan version of Peyton Manning at quarterback, the thinking goes that if Bortles is already better than Chad Henne, who is the presumed starter and possesses a perfectly rectangular head, then why leave him on the bench to marinate? He can marinate on the football field. He can marinate in the ACTION. And if he can marinate in the ACTION until he achieves the perfect soy-saucey brown color and zesty tang of a starting-caliber NFL quarterback, then why not throw him out there?

This is a question you could ask your dog if you were mad at him, because it’s an annoying question.  Let’s recount what we know about Blake Bortles so far: He has thrown 28 passes against second-team defenses, playing with a second-team offense. Eighteen of those throws were caught by his teammates. Ten of them weren’t. He has yet to practice with the first-team offense, though there are plans for him to do so this week. Both his first name and last name begin with the letter B. He is 6-foot-5. I Googled “blake bortles favorite food” and learned nothing, so let’s chalk that up as a mystery.

There’s a certain amount of exegesis in every take on rookies’ preseasons. Twenty-eight passes is an astoundingly small amount — Peyton Manning threw 659 passes last year alone — and so we have to fill in the gaps between those passes with our own biases and emotion. One of the most interesting things about Bortles is how much he looks like an All-Pro NFL quarterback; he’s tall and thick and has a jaw like the toe of a boot. In the few minutes of football we’ve seen him play so far as a Jaguar, he has moved around and outside of the pocket well, gone through progressions efficiently, and made a dozen convincing throws that he’ll have to make two dozen times a week, every week, for the rest of his professional life.

What’s exciting about Bortles is exactly what isn’t exciting about Johnny Manziel. Unlike Manziel, who exists as a sort of Joker card in the deck of football, with every play of his subverting expectations, Bortles is a paean to the status quo. He’s Captain America. He looks like he drives an F-150. Each of his achievements is going to be met with reactionary rapture — maybe appropriate, maybe not — weighted with a significance beyond the case study of Bortles, Jaguars Quarterback. Should Blake Bortles start for Jacksonville? Should America be great? You know the answer to this question in your heart. But maybe ask your dog, too.

The NHL’s Race to the Bottom

It's Not Quite a Miracle, But the Angels Have Achieved AL West Salvation