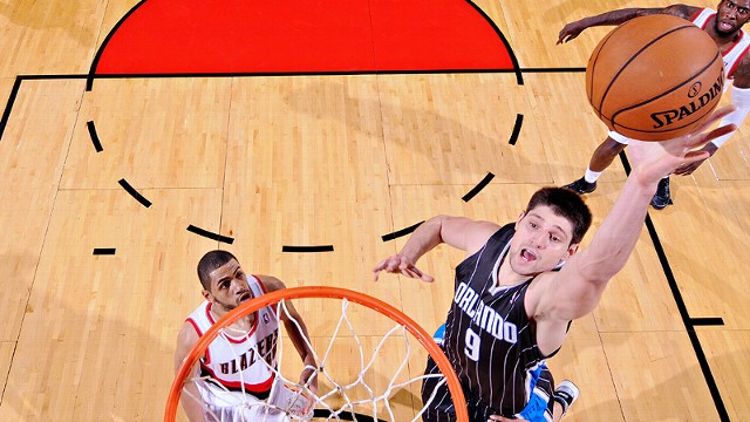 It’s been nearly five years since the Memphis Grizzlies sent Pau Gasol to the L.A. Lakers in what was one of the more vilified deals in NBA history. In exchange for an All-Star big man who helped the Lakers secure two titles, the Grizzlies received luminary talents Kwame Brown and Javaris Crittenton, aging veteran Aaron McKie, and the draft rights to Marc Gasol, Pau’s promising, but pudgy, younger brother.

As hard as it is to believe now, Crittenton, picked 19th in 2007, was the more highly rated prospect at the time. Drafted 47th overall by the Lakers that same year, Marc was almost viewed as a throw-in to the deal, but despite being a relative afterthought, the unheralded Gasol has emerged as one of the league’s best centers, and a trade once considered lopsided now seems markedly more balanced.

This summer, another mega-trade landed a star big man in Los Angeles while leaving his old team with compensation that seemed rather ordinary. Initially, it looked as if, other than a handful of draft picks (three firsts and two seconds), the Orlando Magic would have little to show in exchange for Dwight Howard. But among the mildly overpaid veterans (Arron Afflalo and Al Harrington) and assorted flotsam (Josh McRoberts and Christian Eyenga), the Magic received Nikola Vucevic, an unheralded first-round pick fresh off a solid, but uninspiring, rookie season. Much like Gasol did for Memphis, Vucevic is emerging as an unexpected force who might eventually alter how we view a franchise-changing trade.

If you didn’t hear much from him last year in Philadelphia, it’s because playing for noted taskmaster Doug Collins, Vucevic and his defensive deficiencies were trapped behind Elton Brand, Spencer Hawes (seriously), and fellow rookie Lavoy Allen. This year, for a rebuilding but surprisingly competitive Orlando team, the big man’s minutes have nearly doubled, from 15.9 to 31.6 per game.

The extended playing time has turned Vucevic loose as a double-double machine. After a slow start, the USC product averaged 12.1 points and 12.8 rebounds in December. In three games so far this month, Vucevic has upped those averages to 16.0 and 14.3, respectively. Numbers like that would be impressive for an established veteran starter, much less a 22-year-old still adjusting to the NBA game. Unlike Orlando’s slew of picks, none of which is guaranteed to yield a player this productive, Vucevic has already provided great value.

As his incredible 29-rebound performance against Miami shows, Vucevic is going to make his living in this league cleaning up on the glass. His defensive rebound rate of 26.6 is good for sixth among centers and 12th overall (which really amounts to fifth and 11th, as one of the players ahead of him is Golden State’s Andris Biedrins, who averages fewer than 10 minutes a game). As a non-athlete, Vucevic relies on solid positioning and his tremendous length (7-5 wingspan) to suck up errant shots:

The young center is not without flaws — his defensive rating of 105.2 makes him more Al Jefferson than Dwight Howard. But while it’s easy to suggest his lack of mobility and lift will always make him a liability at that end, more than a few relatively unathletic big men — Omer Asik comes to mind — have proved capable of anchoring the back line of a defense. If Vucevic does want to become a factor on that end, it will take a trip to the Kevin Garnett school of defensive positioning to learn exactly where and when he can use his size to deter opponents from attacking the rim for easy buckets.

His true shooting percentage (which is weighted for 3-pointers and free throws) of 51.7 is also frighteningly low for a 7-footer and ranks him just 34th among centers. A heavy reliance on 2-point shots is the primary culprit for this, but employing more shot fakes near the rim could help Vucevic tally a few more free throw attempts. There’s also the possibility that Vucevic, who shot 34 percent from behind the arc his last year in college, can add a Mehmet Okur–type element to his game by further developing his perimeter shot.

Even if Vucevic sees only minor improvements on the defensive end of the floor, his production could still make him a solid starter on a contending team. But with his deft touch around the hoop and the foundation for a solid outside stroke, there’s a chance that he could expand his game to the point where he’s considered one of the best centers in the Eastern Conference by 2015.

For eight years, the talented but insecure Howard anchored Orlando’s frontcourt. With size still being one of the league’s most precious commodities, it was a major blow to lose such an incredibly productive big man, and it seemed as though the Magic’s only way to find a replacement for Howard’s immense talent would be through its collection of picks. As it turns out, that player might have already arrived unnoticed.