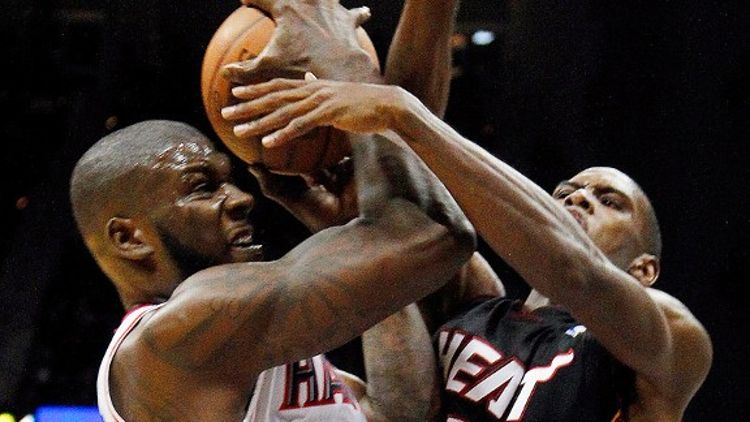 Last night, some guy named Ivan Johnson came out of nowhere for the Atlanta Hawks to score 13 of his career 15 points against the Miami Heat in a triple-overtime barnburning loss. Some mid-game thoughts on Ivan:

It’s one thing to see a guy come into a game that you’ve never heard of. It’s a completely different thing to watch a guy who looks like he should be working assault rifle concessions enter the game, contribute repeatedly, and make big plays. Who is this man of mystery, Ivan Johnson? I won’t even pretend like I actually know, but these six fun facts about him should brighten your day.

1. He’s a 27 year old rookie. Just to put that in perspective, he’s the same age as LeBron, but this is LeBron’s 9th season.

2. Played college basketball at four colleges in four years. Two were Junior Colleges, one was Cal State San Bernardino, and one was Oregon. Left Oregon because his coach did not renew his scholarship due to “anger management issues.” I wonder if these problems persisted?

4. Played in the NBA D-League in 2010-2011 before entering the NBA. In his first nine games, he had five technicals and an ejection.

5. Has a diamond grill and keeps it in during the game.

6. Did not have a Wikipedia page last night. Has one today.

It might be too early to call Ivan Johnson the 2011-2012 NBA’s “Most Interesting Man In The World” frontrunner, because that would be disrespectful to 7-time champion Metta World Peace, but he definitely has a bright future ahead of him. I look forward to a season full of Garnett scuffles, mid-game tattoes, and countless hustle plays. Never change, Ivan.