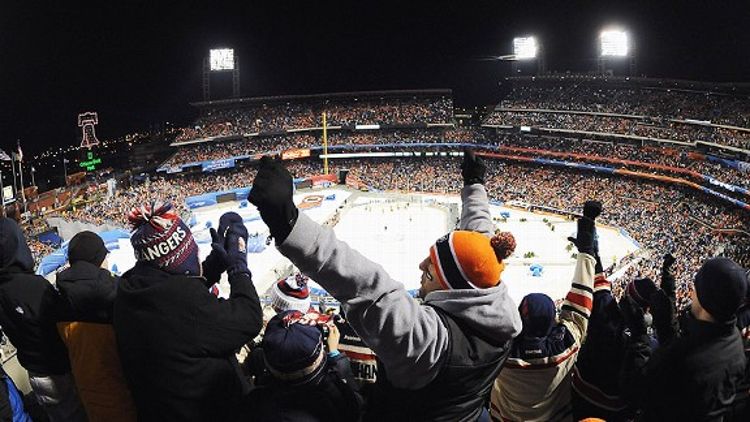 A quick note: Given the finale last night of the HBO hock-umentary 24/7 Rangers/Flyers: The Road to the NHL Winter Classic, I’m hijacking this week’s NHL goaltender blog post for a mashup of TV recapping, some leftover observations from last weekend in Philadelphia, and a little bit of goalie news. Consider this post HBOalies of the Week. We’ll return to our regularly scheduled programming next week.

With his team just having lost to the New York Rangers 3-2 in the Winter Classic, Flyers coach Peter Laviolette was asked how he felt about being a part of the show. He said all the right things: The crew had become like part of the team, the product was outstanding, it was great for the league. But then he smiled on one side of his mouth ever so slightly, and let down his guard just a bit. “Yeah,” he admitted. “We’re all ready to say goodbye to HBO.”

Everyone assembled in the interview room chuckled, reading between the lines. Just the day before, Laviolette had stood up there in much the same way and been assaulted with questions about the biggest thing on everyone’s mind: Was goaltender Ilya Bryzgalov going to be starting in net?

Laviolette seemed caught off guard by those queries, and he had a right to be. He has long been notoriously stingy about the way in which he reveals goalie information, and his carefully crafted protocol had been totally disregarded the morning before the Winter Classic by his ostensible no. 1 netminder, Bryzgalov, the team’s biggest offseason move in an offseason of really big moves.

Bryzgalov had held court in the locker room that day, following Flyers practice, for more than 20 minutes in a zany, unorthodox, candid, and frankly a little bit sad press scrum that he kicked off by revealing that, no, he would not be starting tomorrow, and that the biggest thing on his mind was making sure not to forget his Thermos on the bench. (He also talked about Tolstoy, prison fights, and how heavily Russians celebrate New Year’s.)

HBO isn’t the reason for Bryzgalov’s crazy; he’s been known for these sorts of appearances throughout his career. (He was already a meme years before arriving in the Illadelph.) But his persona on the show certainly helped spin the wheel and feed the beast. Before and during the Winter Classic, the media all but leered at the man any time he walked by, regarding him as less of a serious starting goaltender and more as a one-man sideshow, a money quote, a happening. “OK GO, WE GOT BRYZ!” I saw one TV producer scream at his crew, who scurried over practically licking their chops.

The result has been some funny catchphrases, sure, but also a worrisome look at the way the offbeat goaltender may be handling the attention — and a potentially nightmarish glimpse into the deteriorating relationship between him and the Flyers organization.

I heard the following words said a lot throughout the weekend, whether accompanied by a snicker or a shake of the head: “Nine years, $51 million.” That’s how much Philadelphia, a team that for basically decades now has considered itself just one legit goaltender away from a Stanley Cup, inked Bryzgalov for this past summer. That’s a lot to invest in, and a long time to be tethered to, a man who couldn’t even maintain the starting job for a marquee event like the Winter Classic.

Sure, there were all kinds of distractions in the month of December, so many cameras and eyeballs and microphones shoved in faces. But there will be distractions in the playoffs, too, particularly in a city like hockey-mad (and, to listen to WIP radio, just mad in general) Philadelphia. Everyone on both teams was put under the same spotlight, yet only one player across the two rosters reacted by simultaneously basking and withering beneath the glare.

When I wrote a blog post six weeks ago about Phoenix’s Mike Smith, who joined the Coyotes this offseason after Bryzgalov departed the franchise for Philly, some of the quotes from the team’s defensemen about their former goaltender were damning. “I’m glad he’s gone, because the guy we brought in has done a great job and fit in real well, made our team even closer,” Derek Morris told Coyotes broadcaster Todd Walsh. “There was some animosity there with Bryz sometimes.” (His quotes were backed up by another blueliner, Adrian Aucoin.)

Philadelphia is an organization for which locker room dynamics are so important that the team shipped off both its captain and another of its most productive scorers this offseason for reasons that had partly to do with team chemistry. But the other reason for the moves? To clear cap space for a much-needed franchise goalie, someone to rely on for the better part of a decade.

Instead, not even one year in, Bryzgalov has already been declared off-limits to the media by the fed-up Flyers (a decision that was in clear violation of league rules and was quickly reversed under pressure from writers), visibly weirded out some of his teammates, had some sparkling showings but also some absolute stinkers, and willfully gone against protocol on the team’s biggest media day of the season. (On the other side of the room, and even with the cat already out of the bag, backup Sergei Bobrovsky obediently called the information “confidential” when asked whether he would be playing.)

I love personalities, and I love wacky goalies. They should be on display more rather than less. But they can quickly become like someone else’s children: fun to look at and monkey around with, but you go home relieved they’re not yours.

It’s a long season, and it’s not like the team has suffered too greatly: It’s currently fourth in the Eastern Conference, and just four points behind the Rangers for Atlantic Division’s top spot. Bryzgalov will have ample opportunity to prove himself to be the player Philadelphia wanted and needs; he returned to net last night and picked up a 5-4 win in the team’s first rematch against its 2010 Stanley Cup finals foe, the Chicago Blackhawks. It was not without incident, though: the Blackhawks scored twice in the third period in the span of 25 seconds to erase a Philadelphia lead, and after the game Bryzgalov was reported to be “too sick” to talk to reporters. As CSN Philly’s Sarah Baicker reported, Flyers GM Paul Holmgren “reiterated that Bryzgalov was ill and that they wanted him to leave the facility as quickly as possible to avoid contaminating the rest of the team.”

In Philadelphia last weekend, hockey insiders were already whispering that maybe next season’s revamped CBA will include some sort of amnesty clause allowing teams to wash their hands of one player apiece. You can imagine who that player might be right about now for the Flyers. Really, the whole situation, as Bryz himself might sarcastically and angrily say, as he did following a 5-1 loss to Tampa Bay that was one of the reasons behind his Winter Classic benching, is outstaaaaanding.

Following Laviolette on the podium after the game was Rangers’ coach John Tortorella, whom some brave and/or unknowing soul (a Philly writer, I’m assuming, on deadline) decided to ask: “Can you give us some quick impressions of the prominent rookies of the Flyers, like Sean Courturier, Brayden Schenn and Matt Read?” (5:50 mark below.)

A cold breeze swept through the room, leaves swirled through the air, crickets chirped, and gravel was kicked around by awkward teenagers in the few seconds before Tortorella responded. “Who?” he snapped, looking like he was ready to spit on the ground. “On the Flyers? I don’t want to talk about the Flyers. I’m not talking about the Flyers.”

It was reminiscent of an exchange shown during last night’s final episode of 24/7, when Tortorella, addressing his team in between the second and third periods of the Winter Classic, turned to one of his players (Brandon Dubinsky, I think) and yelled out: “That’s a great hit on whatever that fuckin’ guy’s name is.”

It went both ways, of course. During the game, the Flyers’ Scott Hartnell went at New York’s Michael Del Zotto with a time-honored “I don’t even know your name.” Throughout the series, various on-ice zingers ranged from “This is fantasy camp for you” to “You’re fuckin’ irrelevant.”

Downplaying one’s opponent, acting as if you don’t know and don’t care, is a time-honored tactic and one that trickles all the way down to high school sports (not to mention high school social dynamics.) I can remember scoffing, myself, at some psyched-up team of opposing field hockey players and observing how adorable it was that they thought we were rivals. Where was their school even located? But there’s no question the Rangers and Flyers really do know and despise one another, and there’s also no question that this mutual distaste will grow even more bitter beginning next season. The NHL’s realignment will almost certainly create a scenario in which the road to and through the newly divisional playoffs will intersect at Broad Street and Broadway again and again and again.

Such familiarity — even when downplayed or flat-out denied — can come with a cost. I loved the scene in 24/7 in which Claude Giroux, Scott Hartnell, and James van Riemsdyk (filling in on their line for the injured Jaromir Jagr, who allowed cameras to follow him into the training room when he left the game with an injury in the first period, but then shooed them away) discussed what revenge they’d take on the Rangers for Mike Rupp’s mocking, Jagrian post-goal salute. Settling on imitating Artem Anisimov’s machine gun celebration, the trio then discussed who would fight whom in the hypothetical aftermath.

It was great TV, and it was fun to see a guy like Hartnell first learn of Rupp’s imitation and react with genuine and utter disgust. But you also have to wonder whether Laviolette watched the show, and what he thought of that if he did. Instead of calling dibs on taking on a Rangers rookie like Carl Hagelin, shouldn’t a star like Claude Giroux be sniffing that he doesn’t even know who the kid is?

Other observations from the show (from which I am about to go into some serious withdrawal):

Previously by Katie Baker:
The Big, Bad Bruins Are So, So Good
12 Quick Thoughts on the Winter Classic
Wedded Blitz: December in the New York Times Wedding Section