Where Do the Broncos Go From Here? 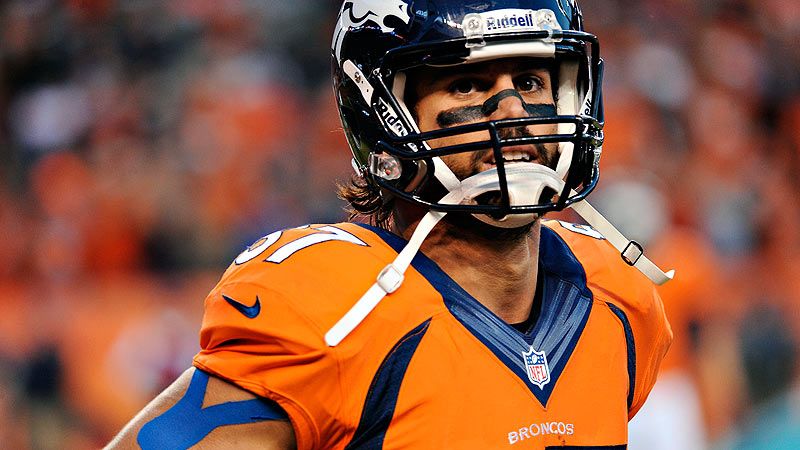 One of the inane classics overheard in many a postgame locker room is the “24-hour rule.” Win or lose, players have a single day to enjoy or lament what just happened. At that point, it’s on to another game.

That doesn’t really apply to season-ending games — it really doesn’t apply to Super Bowls lost in horrifying fashion — but in this case, the Broncos might be smart to put the rule into practice. They’ve had their day of mourning; the question now is what happens next.

It would only seem right to start on offense, and the list of players on that side begins with Eric Decker. The 26-year-old finished the last two seasons of his rookie contract with more than 1,000 yards and double-digit touchdowns, but it sounds like the Broncos may be willing to let someone else hand Decker the no. 1 receiver money he’s looking for.

As things stand, the Broncos don’t have much cap room to work with this offseason, but that should change with a bit of standard offseason reshuffling. Champ Bailey won’t be making $10 million for Denver next season; the only decision is whether it’s because he was cut or his contract is restructured. Guard Chris Kuper ($6 million hit, 31, missed the entire season) and Jacob Tamme are also potential cap casualties, but even if Denver does clear some room, it has big-money decisions looming on the horizon. Both Demaryius Thomas and Julius Thomas are up for extensions after next season; so is Terrance Knighton, who emerged as maybe the Broncos’ best defender by the end of the year. Those obligations may prove too much for Denver to bring Decker back. It would supposedly like to keep him around, but I wouldn’t be surprised if it wasn’t willing to match what he could fetch on the open market.

The same probably goes for Knowshon Moreno. The 2009 first-round pick had a career season while playing for a new contract, but the Broncos spent a second-round pick on Montee Ball for a reason. Moreno got plenty of chances in 2013 because he was the back Peyton Manning trusted, but the Broncos have way too many holes elsewhere to commit resources to two starting running backs.

On offense, the most glaring hole is at left guard. Zane Beadles, who went to the Pro Bowl only a season ago, is a free agent who was probably the weakest member of Denver’s offensive line. The Broncos’ interior line has had a real Spinal Tap drummer feel to it over the past couple of years. Dan Koppen, Ryan Lilja, J.D. Walton, and Kuper were all, at some point, players Denver planned to rely on before they went down. After a few cuts and a few concessions that it might need to make other plans, any possible replacement for Beadles probably isn’t on the roster. It’s one direction it could go in the first couple of rounds of May’s draft.

Replacing the second-best guard on a high-profile offense only takes so much precedence. Where the Broncos really need to get better is on the other side of the ball, and the spot that doesn’t seem to have an obvious solution is middle linebacker. As of 2013 training camp, former Eagle Stewart Bradley was tapped as the guy set to start in the middle of Denver’s defense, but he never played a down. That forced the Broncos to shift Wesley Woodyard inside and do some shuffling with the rest of their linebackers. Two of those spots should be set heading into next year — Danny Trevathan earned his weakside role this season and Von Miller should be camped out on the strong side for a long time — but Woodyard, Bradley, and Paris Lenon (who took over as the starter for Woodyard after the latter was hurt midway through the season) are free agents. Woodyard’s been a very good player for stretches in the past, but he struggled after returning from injury this year. The Broncos will have a decision to make there.

The most pressing questions on defense, though, is what should and will happen with two of Denver’s more impressive stopgap signings from a year ago. The Broncos signed Dominique Rodgers-Cromartie to a one-year, prove-it deal, and he did exactly that. He was the best player in the secondary, and at 27, he’s earned a long-term commitment, and the Broncos would be smart to give it to him. They’re now painfully familiar with what a good secondary can do.

Like DRC, Shaun Phillips also signed a one-year deal last offseason after a disappointing conclusion at his previous stop. Reports say that Denver plans on re-signing Phillips, who should make more than his $1 million base salary in 2013. His team-leading 10 sacks this year are a bit misleading, but both as a complement to Miller and as an edge-setting run defender, he’s useful. Another pass-rusher is still very much among the Broncos’ needs, though. Phillips is 32, Denver finished 21st in adjusted sack rate this year, and they’re lucky to lose Robert Ayers, who was never particularly effective after being taken in the first round. Secondary pass rushing isn’t no. 1 on the to-do list, but it’s something to keep in mind.

One of the reasons the Broncos’ pass rush future isn’t nearly as bleak as it seemed at times this year is that there’s reason to believe Miller will be back and playing like his old self for most of next season. He wasn’t quite the destructive force he was in 2012 during his brief stint this year, but when healthy, he’s still among the most terrifying defensive players in football. Denver missed him badly Sunday. They missed a lot of guys.

Seattle’s Super Bowl dominance was a product of a roster that from top to bottom was much better and much deeper than what the Broncos had to offer, and although there still would have been a gap with both teams at full strength, it would have been significantly smaller. As of last week, the Seahawks were the healthiest they’d been all year, while Denver’s missing starters included Miller, Rahim Moore, Chris Harris, Kevin Vickerson, Derek Wolfe, Ryan Clady, and, I guess, technically Dan Koppen.

Denver didn’t end up suffering where Vickerson and Wolfe would’ve helped most. It slowed down the Seahawks’ running game even while shorthanded, but it was at the expense of defending Russell Wilson and the passing game. Wilson had time, chances to spill out of the pocket, and receivers running open for most of the game. The Broncos’ pass defense wasn’t all that great when it was actually healthy, let alone with some of its better players on the sideline.

The Broncos should get some help next year just by getting everyone back playing. Peyton Manning, the least-hit, least-sacked quarterback in football, was able to make Chris Clark look like a viable NFL left tackle for much of the season, but Clady is among the best in the league, Manning or not. We saw Sunday that offensive line is an area where the Broncos could use an influx of talent — most notably at right tackle, where 2011 second-round pick Orlando Franklin, who’s entering the final year of his rookie deal, had a disaster of a game — but getting Clady back isn’t a bad start.

John Elway did an excellent job last offseason in identifying the problem areas of his roster and filling those spots with a combination of short- and long-term solutions. With everyone he has returning from injury, there aren’t nearly as many of those areas as there seemed to be Sunday. The Broncos’ roster isn’t the Seahawks’, but with another draft’s worth of picks and at least a little money to work with, they should be able to provide Manning with more than enough help to make next year look a lot like the past two.

“He’s a clown,” Cousins said of Dunleavy. “And he’s scary. I wouldn’t waste my time if I ever saw him outside of the gym.”