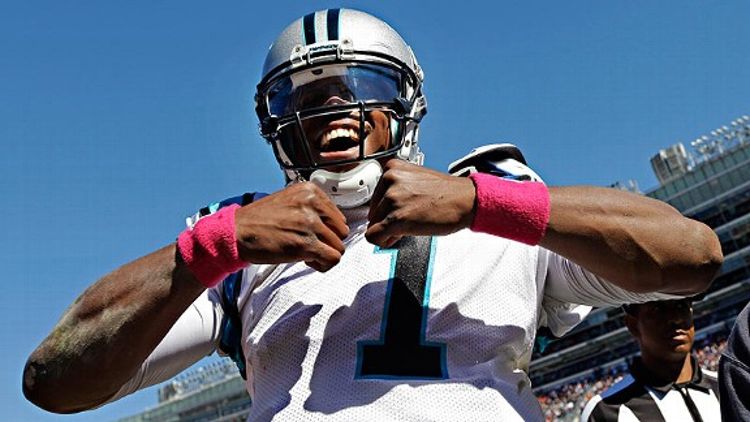 Every sportsbook worth its salt provides a “NFL statistics” sheet for potential bettors to peruse before plunking down their cash. These sheets can vary, but just about all of them we’ve seen include one piece of information: A team’s record against the spread, which refers to a team’s performance versus the line set in sportsbooks as opposed to their actual performance on the field. For example, take the Carolina Panthers. While they’re 1-4 in real life, their three-point loss to the Saints last week came in a game in which they were 6.5-point underdogs. That’s a win against the spread, and it took them to 4-1 against the spread (hereafter abbreviated as ATS) this season. The statistics sheet chops ATS data all kinds of different ways, so you can see ATS performance in a team’s past five games, or how it does on the road, or how effective it is as the underdog.

There’s only one problem with ATS data: It has no predicative value whatsoever. It’s the sportsbook equivalent of the video board next to each roulette table that details the outcome of the last 20 spins, trying to catch the eye of somebody who thinks their number is due. It’s useless information masquerading as relevant statistics. And in this space over the next couple of weeks, we’ll prove it to you.

For ATS statistics to have any meaningful value in helping you handicap football games, it needs to be consistent over some length of time. The fact that the Panthers are 4-1 so far this year should mean that they are a team you should want to bet on (or, perhaps, avoid) the rest of the way. A lot can happen in five games, of course, so let’s just start with the simple split of a half season. That’s our first question: Does a team’s ATS record in the first half of a season tell you anything about its ATS record in the second half of that same season?

To answer that, we can use the coefficient of correlation, which measures the strength of the relationship between two different sets of variables (in this case, the sets of variables being each team’s ATS record in the first half and its ATS record in the second half). A longer, but still simple, explanation of correlation can be found here. As the correlation coefficient rises to 1 or falls to -1, each variable exhibits more predicative power in predicting the other, making it more useful. A positive correlation indicates that the two variables rise and fall together, so two positively correlated sets of variables would be something like average number of chicken wings consumed and belt size. A negative correlation indicates that the two variables rise and fall in opposite directions, so two negatively-correlated sets of variables would be something like cigarettes smoked and average lifespan. We’ll be considering each team’s ATS performance in each half of the season from each of the past 17 seasons, thanks to the data compiled by Spreadapedia.

The correlation coefficient for the relationship between a team’s first-half ATS winning percentage and that same figure in the second half is -0.06. Less than one half of 1 percent of a team’s performance in the second half against the spread can be explained by what it did in the first half. When figuring out whom to bet on in a given game, it has about as much predicative value as using the Scrabble scores produced by the names on each team’s roster. Actually, probably less.

They don’t. In fact, they’re a lot worse. Those great ATS teams in the first half have an average ATS winning percentage of just .499 in the second half. The first-half losers go all the way up to .543 in the second half. A finer example of regression towards the mean you will not find. The important thing to take away here is that you can’t rely on teams with great ATS records or expect to get value by betting on teams with terrible ATS records; it just has no meaningful predicative value in any sense of the word.

OK, so eight games is an awfully small sample. Let’s try 16. We’ll run the same test, but we’ll see if ATS statistics have any meaning from season to season as opposed to half season to half season. And don’t bother with the drumroll, because the correlation coefficient is -0.09. That Panthers team that we mentioned in the intro? They had the worst ATS record in football last season, too, at 4-12. They have already matched that win total with 11 weeks left to go. Thanks, Cam! The Lions were a league-best 12-4 ATS last year and have started 4-0-1 this season, but just behind them were the Falcons, who were 11-5 last year before starting 1-4 this season.

Some touts (you know, those folks with subscription websites or phone numbers that quote ridiculous, impossible-to-get records in the hopes of getting you to pay for their picks) will also mention a team’s ATS performance at home or on the road as having meaningful value. While home-field advantage unquestionably exists, it’s already built into the Vegas lines, and it just doesn’t have any history of being useful on a year-to-year basis. The year-to-year correlation for a team’s ATS winning percentage at home is -0.07; on the road it’s -0.03.

Again, let’s make it simpler. The table below considers those teams that had either a great winning percentage (.750 or better) or a terrible one (.250 or worse) at home or on the road in a given season. Take the figures at home. There were 63 teams over the time frame that had an ATS winning percentage of .750 or better in a given season, but there were 65 teams that were at a .250 mark or worse. In the subsequent season, those great home teams were just .471 against the spread at home, while the awful ones were more than 20 percentage points better, at .492.

Next week, we’ll be back with a look at the consistency of teams going over or under the point spread listed for their games. But one final table before we get to this week’s line moves: If you had just bet on the same team every single week from 1994 through 2010, regardless of what the spread was or who their opponents were, who would have made you the most money? The answer really isn’t all that surprising.

As we discussed on this Monday’s B.S. Report, the Las Vegas Hilton often posts the lines for a week’s games during the middle of the previous week. So the lines for Week 6 were posted on the Tuesday before Week 5. There’s not much movement on these lines until the previous week’s games have been played, but it gives you the opportunity to speculate on a line moving dramatically based on a week of games before the games actually happen.

Being smart, I decided to go and place a bet on the Eagles as a pick ’em, figuring that they would beat the Bills handily and that I’d be holding a ticket on a line that would move to -2 or even -3 by the time they actually played the Redskins. As you may have seen on Sunday, the Eagles did not beat the Bills on Sunday. And by Sunday night, the line had actually moved away from me; instead of being favored by two or three points, the Eagles were one-point underdogs.

Since then, the line has moved back toward Philly. It went back to being a pick ’em Monday afternoon, and by that night’s action, the Eagles were again favored by a point. It’s worth noting that the line is different at other sportsbooks; as of Tuesday night, the Eagles are still a pick ’em at the MGM/Mirage sportsbooks. So there may still be some movement on this line to come. I may end up getting my value opportunity after all.

What the market is telling us is that Mario Williams, who went down with a season-ending injury after this line went up, is worth two points in this game. Does that seem accurate? This line sure seems like a tempting 6.5-point teaser opportunity to push the Ravens down to -1.5, a bet that historically pays out 79.1 percent of the time. We just need a partner …

Oh, so you mean I can tease this line down to Jets -0.5 and bet against Matt Moore being able to beat a very good pass defense on the road? And how much can I put on this now?

Well, this is a matchup of a 4-1 ATS team against a 1-4 ATS team, which means … nothing. We were just testing you. But this line sure seems tricky to judge. One thing in favor of the Falcons’ side of the line is that the Carolina run defense is 30th in the league in DVOA. If Atlanta gets a lead, it should be able to keep it.