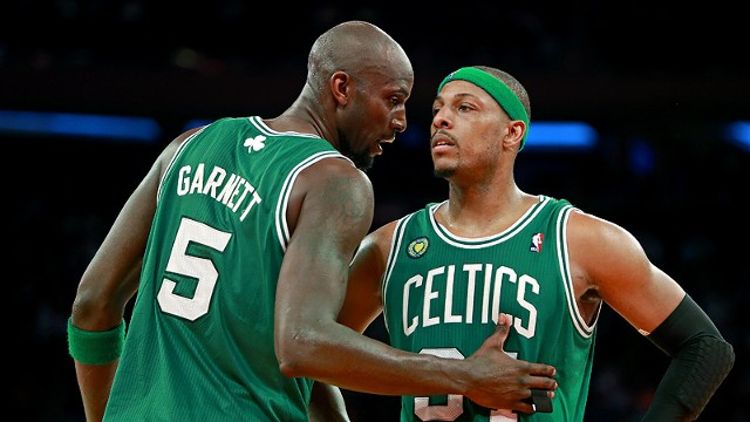 “You can add it up. I don’t want to do your job, but for me it’s most important to have a championship.”

Those are the words of Mikhail Prokhorov from last September, at the ribbon-cutting ceremony for his new billion-dollar arena, in regard to his Nets paying the luxury tax. Last offseason, Brooklyn made a series of headline-stealing, big-money moves to assemble a core of Deron Williams, Joe Johnson, and Brook Lopez, all of which came with a hefty price tag (the Nets’ payroll was $87.65 million last season), but one that also clearly stated the boss’s intentions. And if Prokhorov’s win-now approach was already on display then, it’s really on display now.

With last night’s trade, which will bring Paul Pierce, Kevin Garnett, and Jason Terry to Brooklyn in exchange for Gerald Wallace, Kris Humphries, Keith Bogans, other players, and a trio of first-round picks, the Nets have officially pushed all-in, just as the Celtics have officially blown things up. The combined deals of Pierce, Garnett, and Terry will push Brooklyn’s 2014 payroll close to $100 million (with more than $82 million devoted to just the starting five). And according to Yahoo’s Adrian Wojnarowski, who first reported the deal, they bring with them a cap bill of nearly $80 million. (Brooklyn has also reportedly fully guaranteed the $12 million of Garnett’s deal in 2014-15.) Prokhorov has left no doubt about his priorities since becoming the Nets’ owner. When he took control in 2010, he promised a championship within five years. Well, he’s got two left, and it seems that no amount of money is going to separate him from a chance to achieve that goal.

Brushing aside the issue of financial prudence (might as well, since their owner has), there’s still the issue of just how much closer this move brings Brooklyn to contention. This was a team bounced in the first round last season by a depleted Bulls team, and now they add three players past their 35th birthdays in a conference full of young stars. The way the roster currently stands, Brooklyn’s starting five figures to be Williams, Johnson, Pierce, Garnett, and Lopez. On paper five years ago, this would be a daunting collection of talent; they won’t be a title favorite next season, but this is still a move that significantly improves the Nets in a couple of areas.

The first is defensively. The Nets were tied for 18th in the league last year in points allowed per 100 possessions, with 103.6. Since Garnett arrived in Boston for the 2007-08 season, the Celtics have finished outside the top five in that category just once (last season; they finished sixth). Part of that success was the defensive scheme made popular by former Celtics assistant Tom Thibodeau and since adopted throughout the league, but another and perhaps even bigger aspect is Garnett. Boston gave up just 96.2 points per 100 possessions with him on the floor this season (a mark that would’ve been the best in the league) and 104.6 with him on the bench (which would’ve been good for 22nd). Garnett gives Brooklyn the rim protection it lacks with Lopez, but the problem with leaning on a 37-year-old as the focal point of a defense is just how many injury-free minutes he’ll be able to provide. Garnett has either sat out or played gimpy for stretches of each of the past few seasons, and it’s not likely that a player with more than 52,000 career minutes will stumble into better health.

Pierce continues to be an above-average defender as well, but his main contribution will be as another scoring option, and maybe more importantly, as the floor-stretching wing Brooklyn badly needed in last year’s playoffs. The Bulls used Wallace’s defender as another body in the lane throughout that first-round series, but with Pierce and Johnson on the wings, the Nets now have two floor spacers that opposing defenses have no choice but to honor. This gives Williams a lot more room to work as he looks to get to the rim, and with Garnett, the Nets point guard now has one of the best (illegal) screen-setting big men in basketball. For teams trying to contend for titles, there’s also something to be said for adding two shot makers who have seen every type of playoff situation pro basketball has to offer.

But there still are questions on the defensive end. Pierce has been a solid team defender since Garnett’s arrival in Boston, but at 35, bringing him in doesn’t solve Brooklyn’s problem of not having an athletic wing defender to deal with the likes of LeBron James. As we saw in the Heat-Pacers series, an elite rim protector is actually the first step in slowing James down, but there are also concerns about how Garnett and Lopez will coexist defensively. Garnett has played center for the majority of the past two seasons, and against some of the conference’s small-ball lineups, either he or Lopez will be left on a Carmelo Anthony or Shane Battier when the two share the floor. When imagining how Garnett’s presence can best influence a defense, one solution is to combat that problem head-on — the way Indiana did — and simply batter teams inside.

The deal doesn’t make Brooklyn better than Miami, and it probably doesn’t make them better than Indiana or a healthy Bulls team, but it redefines them. Again, how much Garnett has left as the season moves into April and May is the primary issue. But if Prokhorov’s goal is to be closer to a championship, no matter the cost, then he’s accomplished it.

Along with making the Nets better in the short run, Garnett and Pierce (and Terry) will also make them very, very old. That’s likely what Danny Ainge is banking on as he goes about his total rebuilding process in Boston. The Celtics’ desire to turn the 2014 season into an exercise in tanking began with the Doc Rivers trade, continued with last night’s deal, and will likely end with how the team elects to handle Rajon Rondo’s return from injury. Boston is undoubtedly a lottery team next year, but depending on the amount of games Rondo plays, they could be in line for a top-five pick in what’s supposed to be the best draft in years. Even if the Celtics don’t end up winning the Andrew Wiggins sweepstakes, a player like Andrew Harrison would be a welcome consolation prize and the type of piece Ainge is looking for as he attempts to reassemble his franchise.

As ESPN.com’s Tom Haberstroh noted yesterday, this trade gives the Celtics two first-round picks in four of the five next drafts, including Brooklyn’s unprotected first-round picks in 2016 and 2018. Ainge’s hope here has to be that by then, Brooklyn’s aged and run-down roster has the Nets high in the lottery, and those two picks end up being major pieces for Boston somewhere down the line. Overall, it could be a very nice haul, considering the short list Ainge probably had to deal with because of Garnett’s no-trade clause. Having to take Wallace’s contract — a disastrous three more years at $30 million — is a major loss, but if Boston wanted to completely bottom out, it’s gotten there.

For Celtics fans, there’s only so much comfort in the rationality of the deal. With Pierce and Garnett gone, Boston loses both the most iconic player of the post-Bird era, one who had played his entire career for only one franchise, and the man most responsible for the 2008 title. Even as someone with no ties to the Celtics or their history, there was something about watching that team, completely redefined, take the floor during that first Big Three season — Garnett’s scream, cheesy as it was; hearing Pierce introduced as “The Captain and the Truth.”

It feels like it was an era that had just started, and it also feels like now that it’s over, it probably should’ve ended with more than one championship. In 2009, it was Garnett’s knee that kept the Celtics from the Finals. In 2010, it was Kendrick Perkins that might’ve kept them from the title. Even at less than full strength, Boston gave the Lakers a seven-game run fit for basketball’s best rivalry, but there was something unfortunate about knowing the battle wasn’t on even ground. That was the thing about the Garnett-era Celtics — it’s been six years since the Big Three began, but somehow, it feels like it was taken too soon.

Men in Blazers: The Confederations Cup Semis and the Finer Points of Summer Blazer Wearing