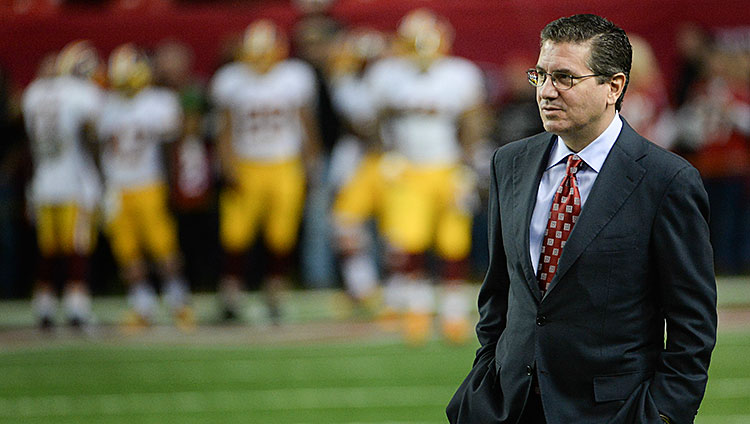 In the latest act of the high drama that is “The Washington Football Team Named After a Racial Slur,” Dan Snyder & Co. had their trademark on the term “Redskins” canceled by the U.S. Patent Office on Wednesday for being “disparaging to Native Americans.” Despite what might seem like a pretty good reason/excuse to finally get this over with and begin rebranding, the franchise has pledged to continue using the name Redskins, lending evidence to my growing suspicion that Dan Snyder is actually a weird 4chan joke that has spun out of control.

To review: The sitting president of the United States has said he’d consider changing the team’s name, and now a branch of the government has provided a business reason/legal precedent to make the move. And yet, Snyder hangs tight. Which brings us to the question: What will it take for Washington to leave “Redskins” behind?

Dan Snyder is powerful in the way only American billionaires and generals in small destabilized nations are powerful. He seems to have full control of the team’s name. However, as much of a tyrant as Snyder might be, there is one thing he depends on: His players have to play. If the Washington roster, and in particular its tactical and spiritual leader Robert Griffin III, decided they were tired of playing under the banner of a slur, they could boycott. It’s a lot to ask of guys who want to earn a paycheck just as much as anyone does, but, as demonstrated in the Donald Sterling situation, the threat of a player revolt goes a long way.

Snyder’s authority depends on one thing: his money. Without it, he’s just another goofy suburban dad wearing sneakers and saying things that make his kids uncomfortable. Fortunately for us, Snyder has a bully pulpit, so we are ALL made uncomfortable by the things he says. But if, for some reason, Snyder turned out to be a tax dodger, or Six Flags were some strangely elaborate pyramid scheme — I wouldn’t be so surprised by that, now that I think of it — this problem would resolve itself. Because this doesn’t seem likely, though, a campaign of embarrassment might be more effective. Who’s Snyder’s favorite musician? I’m guessing Billy Joel. If Billy Joel wrote a song about how much of a jerk Snyder is, and then sang it outside his home while playing a piano perched in the back of a Ford F-150, that would make Snyder cry, and he’d probably leave town forever, and then we could rename the Redskins anything we wanted. Like the Capybaras. The Washington Capybaras.

President Obama’s criticism of the Redskins was made in that beautiful manner in which only politicians ever seem to speak, because the rest of us don’t really have the time to couch our statements in enough conditions to make a divorce lawyer start checking his watch. That being said, he’s still the president of the United States of America, which is a country; if a president can unilaterally invade another sovereign nation, he can force a sports team to change its name.

Oh, he can’t? All right, whatever. THANKS, OBAMA.

The End of the Civilized World

Let’s just say there were an apocalypse, and American society collapsed, leaving us all to form new communities and pursue an alternate means of survival. The NFL would endure, because the only things that are going to outlast the NFL at this point are Twinkies and the Eagles’ Greatest Hits on compact disc. But the demise of American culture still might create enough trauma and discord to force a name change for reasons of camaraderie. And then we’d all be satisfied, at least until the new religion we’ve turned to for support in trying times declared that organized sports were a wasteful exercise in nostalgia, and we started entertaining ourselves by performing Saturday Night Live skits from memory.

As much of an autocrat as Snyder is, if God reached out personally and were like, “Dude, come on, your team name is racist,” then even Snyder would see reason. You can’t just be like, “Actually, God, you’re wrong, it’s respectful.” You can’t just rationalize your way out of a discussion with God like you’re in an argument on Reddit. So, this all sort of falls at God’s feet. Come on, God.