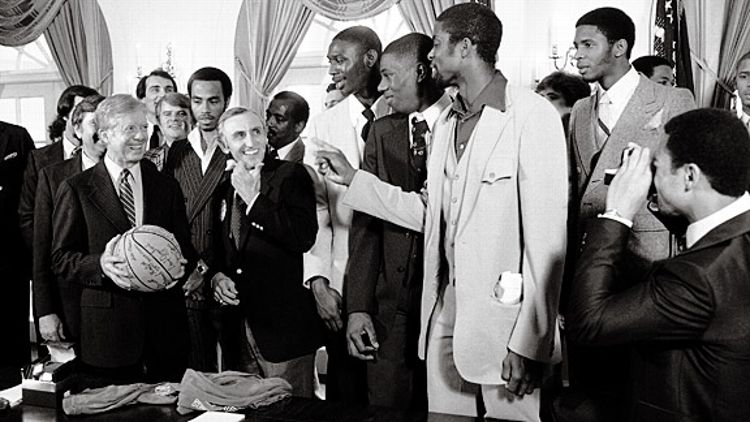 The Super Bowl champion Green Bay Packers are visiting the White House on Friday in what’s become a standard part of American sports’ post-title victory laps. The visit to 1600 Pennsylvania Avenue NW has become so commonplace that fans barely even notice it anymore. So how did this tradition start in the first place?

President Andrew Johnson seems to have opened the White House gates when he hosted Civil War baseball powerhouse the Brooklyn Atlantics in August 1865. The New York Mutuals, which would later become a founding member of the National League, paid a visit the following year, and teams continued to sporadically stop by the White House for the next six decades.

The success of the 1924 Washington Senators (now the Minnesota Twins) helped solidify the tradition. The Senators won the World Series that season, and though fans inundated President Calvin Coolidge with pleas to invite future Hall of Famer Walter Johnson and the rest of the local boys for a visit, Coolidge refused, possibly because he had played host to the team just a month before their World Series win. The following year, he invited the team to the White House four days after it clinched the American League pennant.

Over the next few decades star athletes and teams would occasionally venture to Washington, but the practice of inviting damn near everyone who wins a trophy to the White House didn’t take hold until President Ronald Reagan’s administration.

The Ronald Reagan Presidential Library’s archives are a treasure trove of ‘80s sports photos. Did Kareem and the Lakers get to visit while David Stern looked on in the background? You bet. Did racing legend Richard Petty park his car outside the White House? Of course he did. Which personalized jersey did the Gipper wear around the house more, the one from the New York Giants or the one from the Miami Hurricanes? Tough call. All we can know for sure is that the Secret Service probably attacked Harry Carson for giving Reagan a “Gatorade bath” with a cooler full of popcorn.

Reagan’s successors also saw the benefits of hosting champions, so the tradition hung around — and the White House started has opened its doors a bit more. Sure, the usual suspects still get their audiences with the president, but so do adorable dog show winners and flip-flop wearing women’s lacrosse teams. Want to visit the White House? Win a title. Any title will do.

Now it’s the Packers turn to snap a few photos and chat up President Barack Obama about the debt ceiling. At some point during Friday’s visit, the team will probably also give Obama a jersey with his name on it, which raises an important question: what on Earth does a president does with his closet full of personalized jerseys? Hard to say, really, but these threads are sure to get more use than the nightmarish gift the Auburn women’s swimming and diving team gave George W. Bush during an April 2006 visit: an official team Speedo.