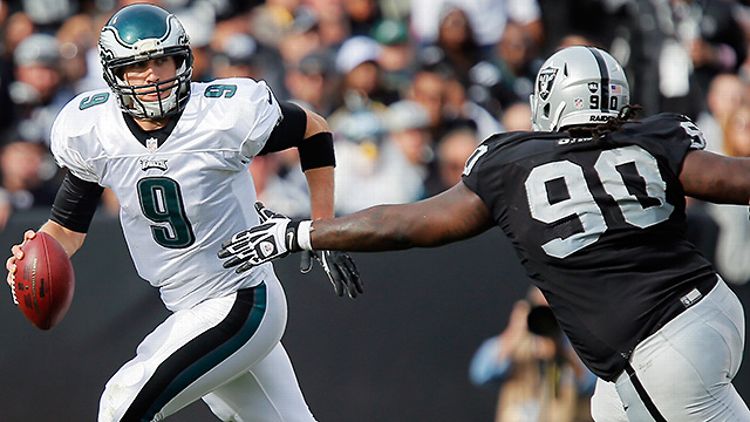 See that thumbs-up? If you own Aaron Rodgers, this gesture means “SAYONARA!” to your fantasy championship dreams.

Aaron Rodgers confirmed to @jasonwilde that he has a fractured collarbone.

While it’s still unclear how much time Rodgers will miss, don’t count on starting him anytime soon. But all is not necessarily lost:

UPDATE: Aaron Rodgers will not need surgery for broken collarbone. (via @RobDemovsky)

Losing Rodgers for a few weeks might not cripple a fantasy squad that has already locked up a playoff berth, but even a team with a shiny winning percentage is still fighting for seeding. And if you were counting on Rodgers to help lead you back into playoff contention, I hope you have a contingency plan in place not named “Seneca Wallace.” If Jay Cutler got dropped in your league after tearing his groin, he’s now a must-add in light of the news that he plans to start this week. The Bills conveniently released Matt Flynn yesterday, and there are rumblings that he could return to Green Bay, where he played his way to an egregious $26 million contract two years ago. If the Packers add Flynn and declare him the starter, he’d be a better fantasy option than most widely available quarterbacks. (I’d prefer to see Brett Favre reunite with Mike McCarthy, but alas.)

Of course, one possible savior remains …

• Yeah, Nick Foles Is Basically Peyton Manning, What of It? What the hell, Nick Foles? What. The. Hell. Mathematicians, neuroscientists, and fantasy gurus alike have long agreed that [terrible last game] + [concussion] ≠ 45 fantasy points, and who are you to shit on a time-honored theory like that? You’re not Galileo. You don’t just go to Oakland and tie the single-game passing touchdown record and net DeSean Jackson 150 yards and make Riley Cooper a fantasy god after being benched or dropped by virtually every fantasy owner with a half-functioning brain. It’s tasteless. It’s rude. It’s downright cruel, and it won’t soon be forgotten.

We were cool with your derpfest against the Cowboys. Fantasy owners get jobbed like that all the time. It happens; no harm, no foul. We collectively deemed your 29-point game in Tampa Bay a fluke and moved on with our lives and rosters. Then you went out and immortalized yourself alongside the likes of Y.A. Tittle and Peyton Manning, raising a bunch of difficult questions in the process, including:

• If a dude passes for seven touchdowns in a game but only 3.8 percent of ESPN.com fantasy owners started him, did it ever really happen? Nope. They don’t call Oakland the Black Hole for nothing. Foles’s performance didn’t even register on the space-time continuum.

Nick Foles had one fewer fantasy point today than Ray Rice has all season.

• Is Foles for real? Sure … if you’re taking into account the entire gamut of the Nick Foles Experience, which unfortunately has a very seedy underbelly. The “real” Nick Foles is an amalgam of the one you saw Sunday and the one you saw in Week 7, and predicting which one is going to show up on a week-to-week basis will be nigh impossible.

• Should I reacquire Foles? Of course! Because when Foles is on, he’s on. Better to own him than some irrelevant WR6 like, say, Andre Roberts. At the very least, Foles could serve as trade bait or as a more-than-capable backup.

• Should I start Foles this week? If you’re a Tom Brady owner in need of a bye-week fill-in, absolutely. Otherwise … come back Thursday for specific instructions. The perfect passer rating still has me a bit woozy.

• Are there any tasty matchups looming? Oh yeaahh. I’ve had Week 11’s Eagles-Redskins tilt circled on my calendar ever since Chip Kelly revolutionized football against Washington, and that should be an easy 25-point outing for Foles. Additionally, the Eagles face Green Bay (Week 10), Detroit (14), Minnesota (15), and Chicago (16), all of which have pass defenses ranked 23rd or lower by Football Outsiders. Of course, the Cowboys didn’t appear to be the toughest matchup, either, after giving up 51 points to the Broncos, so perhaps raw data isn’t the best predictive tool when it comes to Foles. Perhaps there’s no reliable predictive tool when it comes to Foles, because Foles wouldn’t be Foles if he didn’t inflict agonizing apprehension on owners daring enough to start him.

• What does this mean for Riley Cooper’s fantasy value? A lot, potentially. See for yourself:

• Where were you when Foles made history? This is going to be something your grandchildren ask you 50 years down the road, and it’s never too early to start prepping an answer.

I know you’re out there, Nick Foles. Want redemption? Show up in the comments and answer every single one of these bad boys, because frankly I’m just guessing at this point.

• King of the North: Mere hours after I lamented Giovani Bernard’s meager workload, he proved why he deserves to overtake BenJarvus Green-Ellis on the Bengals’ depth chart.

One could argue that it’s best to use Bernard this way so that he stays fresh and healthy, but it’s Week 10. There’s a division title on the line, and the Bengals’ schedule isn’t easy. If Marvin Lewis and Jay Gruden want to win the AFC North, Bernard’s carries need to creep into the teens. Bernard is worth starting in fantasy regardless, but he’d carry an enormous upside if his workload substantially increased.

• Don’t Stop Believing (In C.J. Spiller) (Yet): Were reports of Spiller’s demise greatly exaggerated? Possibly. Rushing for 116 yards on 12 carries was certainly impressive, especially against the NFL’s best defense, but Spiller still looked gimpy throughout the game. He even admitted that his injured left ankle “still [isn’t] there,” which Fred Jackson’s 16 carries corroborated.

Moreover, we’ve been down this road before. Spiller appeared to have turned a corner against Cleveland, only to regress in the following weeks. I’m optimistic about Spiller’s outlook going forward, but cautiously so. Pittsburgh’s shoddy run defense presents a nice opportunity for him to shine in Week 10, at which point we’ll have a better idea of his long-term prospects.

• Anything You Can Do I Can Do Better:

One lesson Keenum clearly learned from his college coach Kevin Sumlin: Keep doing it until they stop it. And the "it" is throwing to Andre

The reaction to Case Keenum’s solid debut was pretty much universal: “Cool game, bro, but why just six targets to Andre Johnson?” Of course, Keenum’s listening skills are legendary, so he responded by targeting Johnson 13 times on Sunday night, which led to nine receptions, 229 yards, and three touchdowns. If Keenum continues to start — and it will be injustice of the highest degree if he doesn’t — expect Johnson’s production to soar. Also, cherish this headline forever and ever and ever.

Matching Johnson in touchdowns: T.Y. Hilton, who might be capable of becoming the world’s fastest man if he adopts a Chicken McNugget–based diet. He’s fast and, more importantly, he’s Andrew Luck’s only real weapon. Darrius Heyward-Bey is too drop-prone, Coby Fleener just doesn’t get open on a consistent basis, and some dude named “Griff Whalen” saw meaningful action in Houston, which tells you all you need to know about the state of Indy’s receiving corps. Hilton used to be the quintessential boom-or-bust receiver (well, after Mike Wallace), but expect him to become a paragon of dependability in Reggie Wayne’s absence.

I’m done making excuses for Mike Shanahan. Here is a list of Redskins running backs who have yet to vulture the shit out of Alfred Morris:

Stash them on your roster now, because they will surely all pilfer touchdowns from Morris at some point this season. I don’t care that Jamison is on the practice squad; Shanahan will inevitably find a way to piss off fantasy owners with him. And no, it’s not enough that Morris still posted 18 fantasy points of his own, because nothing is ever enough when a fullback by the name of Darrel Young is next to Drew Brees and Tony Romo on the Week 9 leaderboard. That’s fantasy antimatter, and the world needs to be warned about it.

The unheralded players worth adding this week.

1. RB Rashad Jennings, Oakland Raiders (available in 95.4 percent of ESPN.com leagues): Here’s a real text I received from ESPN Fantasy yesterday: “Raiders expressing ‘concern’ with RB Darren McFadden’s recurring hamstring injuries.” In other news, water is wet, fire is hot, and Trent Richardson had another disappointing game. McFadden is almost assuredly not playing in Week 10, so pick up Jennings and slot him into your lineup as a low-end RB2/high-end flex. Unfortunately, Jennings rushed for 102 yards and a touchdown on Sunday, which means he has filled his lifetime quota for productive fantasy games, but there’s not much else out there.

Yes, Greg Schiano went to the “Tim Tebow jump pass” page of his playbook, which is the ultimate “Fuck it, I’m about to be fired anyway” move. But hopefully Schiano can make it through the week, because the Bucs actually showed signs of life in Seattle, largely due to a heavy dose of James. (Who?!?!?) Schiano’s job security might be nonexistent, but at least he can appease owners by continuing to feed James. The only mitigating factor here is the slim possibility of Doug Martin returning this week.

BREAKING: #49ers WR @KingCrab15 has been cleared to practice. http://t.co/j9SHLQzwpM

If Crabtree were definitely playing in the next week or two, he’d easily top this priority list. But the 49ers have no reason to rush him back as long as they’re winning, so expect them to proceed with extreme caution è la the Patriots with Gronk or the Seahawks with Percy Harvin. Nevertheless, Crabtree is claim-worthy on upside alone.

4. WR Aaron Dobson, New England Patriots (95.4 percent): Kenbrell Thompkins’s decline has been precipitous and mostly facilitated by Dobson, who, much like the Patriots’ offense, is finally showing signs of life. Drops are an inescapable reality with Dobson, but it never hurts to own Tom Brady’s top downfield receiver. Claim Dobson despite New England’s Week 10 bye.

As stated earlier, Cooper’s propensity for touchdowns with Foles under center is no longer possible to ignore — unless you’re this sad Raiders fan, who has probably had his fill of Cooper and then some.