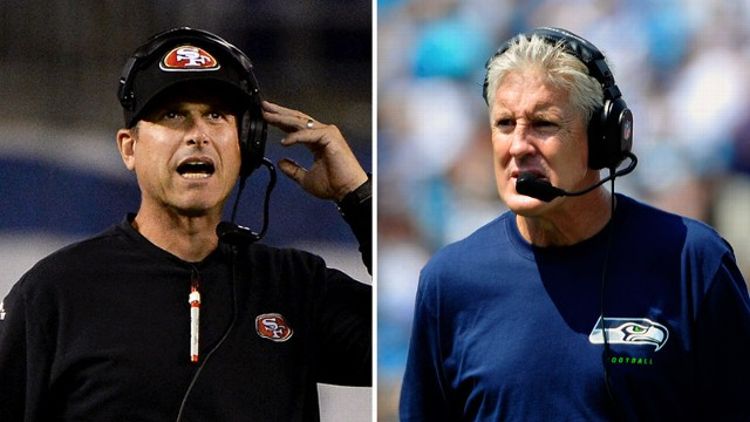 Game of the Week

In the NFL, rivalries are fleeting. There are exceptions (Dallas-Washington, Chicago–Green Bay), but stakes, as much as familiarity, are what breed contempt in pro football. If the Redskins are 5-10, no one cares about their Week 17 game in Dallas.

For the past decade, the games we’ve come to anticipate are the games between teams who’ve played often and for something. In the early part of the Manning-Brady era, the Colts and Patriots seemed to play at least once a year (and they still do). At some point, we shifted to the Ravens and Steelers, who spent two games seeing who could be the first team to 17 points and/or turn the other team into dust. Now, the league’s best rivalry resides in the NFC West, and we get our first installment of the season Sunday night.

To understand how the distaste between the Seahawks and 49ers began, you have to go back about six years. Jim Harbaugh arrived at Stanford in 2007, not long after Reggie Bush and Matt Leinart had helped Pete Carroll build one of the better college football teams of all time at USC. Harbaugh wasted no time in poking the bear. Before the season began, Harbaugh mentioned to a reporter that he’d heard Carroll was leaving USC for the NFL after the season. This miffed Carroll, and not surprisingly, Harbaugh didn’t seem to give a shit. “We bow to no man,” he said at the time. “We bow to no program at Stanford University.” Later that season, Stanford went into the Coliseum as 41-point underdogs and beat no. 1 USC.

Harbaugh and Carroll left the Pac-10 for the NFC West a year apart, and from there, it didn’t take long before the mutual dislike spilled over (it’s hard to believe this is only Harbaugh’s third season as the head coach in San Francisco). Neither is particularly mellow, but the reason it’s all exploded so quickly is how fast each team started winning — a lot. There are personalities like Richard Sherman that amplify whatever’s at stake, but the reason Seattle police officers will be wearing 49ers jerseys to provoke fights (KIDDING, SEATTLE POLICE!) on Sunday night has little to do with one chatty cornerback. It has everything to do with these teams being perhaps the two best in the entire league.

By the end of last season, even as the Seahawks fell to Atlanta one game shy of a third Seattle–San Francisco throwdown, it was clear who was the class of the NFC — if not now, then at least for the foreseeable future. Sunday night’s game became the most anticipated one on the schedule the moment last year’s Super Bowl ended.

The last time the 49ers traveled to Seattle, the result was a 42-13 blowout by the Seahawks. But looking a little closer at that Week 16 game, it would be a surprise to see anything like that happen again. Seattle’s blocked field goal early in the second quarter turned a potential 14-3 game into a 21-0 one. When the lead eventually became 28-3, the 49ers were forced to spend the second half dropping back and throwing — a position in which they’re more comfortable now than in Colin Kaepernick’s sixth start.

They also played the majority of the game without Vernon Davis, who left the game with a concussion after a big hit from Kam Chancellor early in the second quarter. The hit came after a long wheel route to Davis down the right sideline — his second deep target of the drive. Davis was often quiet during Kaepernick’s first several starts, but he’ll likely be a significant part of the 49ers’ game plan on Sunday. More than once last week against the Packers, offensive coordinator Greg Roman used Davis and his speed to hold a safety in the middle of the field by sending him down the seam, giving Anquan Boldin space to exploit man coverage underneath. The Seahawks’ typical coverage involves playing man-to-man with their massive corners on the outside while Earl Thomas plays the single deep safety, and I’d expect we’ll see Davis playing a similar role here.

Boldin did his damage on both sides of the field against Green Bay, and Sunday, one side may be a bit more vulnerable than the other. Brandon Browner missed the Week 1 game against Carolina with a hamstring injury, and he still hadn’t practiced as of Thursday. That leaves Walter Thurmond as Seattle’s starting corner on the right side — a significant win for the Niners, who took advantage of a Green Bay secondary missing two of its starters a week ago. Luckily for Seattle, it does look like defensive end Cliff Avril will make his Seahawks debut after missing the opener.

In the end, this game — and this rivalry — probably comes down to the quarterbacks. A reason this game has become so important so quickly is that Kaepernick and Russell Wilson went from relative unknowns at this time last year to two of the better quarterbacks in football. Some considered Wilson the best member of the 2012 quarterback class following last season, and any doubts about how many different ways Kaepernick can beat you should be quelled after last week’s 400-yard day against the Packers.

There might not be an eyebrow at stake on Sunday, and their off-the-field relationship may be fake, but the football connection between Wilson and Kaepernick is very real. Finding a cheap, excellent quarterback has allowed the Seahawks and 49ers to assemble two of the deepest, most talented rosters in the league. Sunday night, with these two teams, in that stadium, is the best the NFL has to offer.

I said last week that the Raiders would own this spot until they gave me a reason to take them out. Well, they did. Terrelle Pryor did enough running around against the Colts last weekend to make Oakland at least somewhat interesting going forward, but unfortunately (for us), no one can be interesting against Jacksonville. Before the season began, this game seemed like it would surely feature the Bridgewater Bowl winner, and I still think it does. I just think it’s the Jaguars. The one bright spot for Jacksonville is that Blaine Gabbert’s finger troubles mean Chad Henne will be starting for the Jags. Yes, Chad Henne is a bright spot. I mean it — if this is your local game, go do something outside. It’s starting to cool off a little.

The Chiefs’ turnaround so many predicted is off to a promising start, but it’s tough to say anything about any team after playing the Jaguars. Kansas City got to Gabbert constantly last week, thanks to excellent games by the three key members of the Kansas City pass rush. Justin Houston, a third-round pick in 2011 who went to the Pro Bowl last season, and Tamba Hali were typically disruptive, but the most encouraging sign for the Chiefs was the play of last year’s first-round pick, Dontari Poe. The former Memphis nose tackle consistently collapsed the pocket against Jacksonville, and with Houston and Hali coming off the edge, that leaves opposing quarterbacks with very few places to go.

Poe will spend most of Sunday lined up directly over Cowboys’ first-round pick Travis Frederick. It should be a significant early test for Frederick, who many considered the biggest reach of the draft’s first day. Poe is probably one of the stronger players in the entire league. Frederick won’t have many weeks tougher than this.

The Cowboys have another first-round pick on the outside in left tackle Tyron Smith, and he’ll be tasked with slowing down Hali (the Chiefs’ outside linebackers play almost exclusively on one side). Yesterday, Football Outsiders’ Ben Muth looked at how little help the Cowboys gave their young left tackle against the Giants — a sign of confidence from an offensive coordinator who previously served as an offensive line coach. Smith was the youngest player in the NFL when he came into the league, and at just 22, he’s already a very good pass protector at left tackle. Hali will be a good way to measure just how far he’s come along from last year.

Our weekly pick of one player we’ll be going out of our way to watch for at least 10 plays.

The 10th overall pick from April’s draft played well in his debut against Pittsburgh, but this week will be a different sort of challenge. Warmack’s main appeal is as a mauler in the running game, and my guess is that Wade Phillips will do what he can to often line up J.J. Watt as a three-technique tackle against Warmack. When Warmack isn’t dealing with Watt, the Texans still feature Brian Cushing and Antonio Smith (back from suspension) in the middle of their defense. Playing Houston should go a long way in helping Mike Munchak see if his run-heavy offense is sustainable.