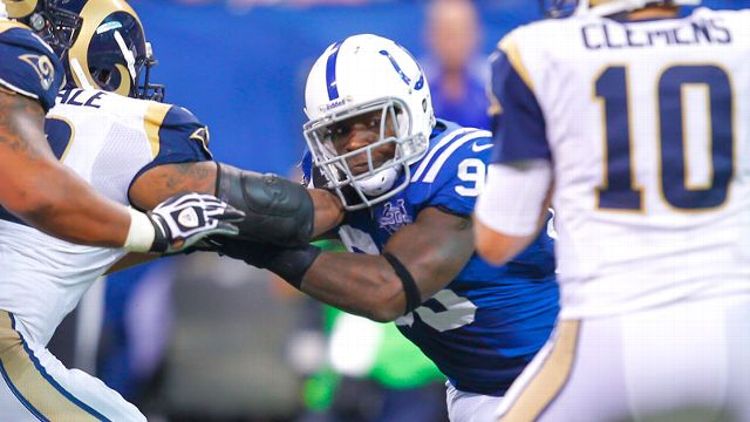 Two of the better line-play matchups of the week happen to come in games that mirror each other across conferences. Each pair of these teams shares the same record, and as everything currently stands, these are probably matchups between the 3- and 4-seeds in both the NFC and AFC.

The Bengals and Colts are almost assured of winning their respective divisions, thanks to the Colts’ win over the Titans last week and the general mediocrity that defines three quarters of the NFC North. What this game really means for each team is a tiebreaker advantage for seeding purposes. The 3-seed would get the benefit of playing the “winner” of the Dolphins-Ravens-whomever jumble, while the 4-seed hosted Kansas City.

Indianapolis seems like it will be the team on the losing end of that race, but even as the Colts have fallen off in recent weeks, Robert Mathis has continued his surprisingly stellar season. The surprise isn’t that Mathis was capable of 15.5 sacks in 12 games — he’s consistently been one of the better pass rushers in the league for the past decade, even if much of that time was spent overshadowed by Dwight Freeney. It’s that he’s having his best season at age 32, and without much help in the pass-rushing department. Mathis has more than half the Colts’ sacks, and no other defender has more than 3.5. As the primary (and maybe sole) focus for protection schemes, he’s still getting to the quarterback regularly.

Mathis does a majority of his pass rushing from the right side, which brings us to the noteworthy shuffling on the Bengals’ offensive line. With everyone healthy, Cincinnati’s left side typically consists of Andrew Whitworth at left tackle and Clint Boling at left guard. Whitworth is one of the better left tackles in all of football, but on more than one occasion this year, he’s bumped inside to guard because of injury. That was the case last week, when Boling went down with a knee injury likely to cost him the rest of this season.

This leaves the Bengals with a decision to make. Right guard and former first-round pick Kevin Zeitler should be back this week, so his replacement, Mike Pollak, could be freed up to replace the injured Boling while Whitworth returns to tackle. The other option, which appears to be the more likely one, is keeping Whitworth at guard and playing third tackle Anthony Collins on the left side. Either configuration should be worth watching, if for a different reason. If Whitworth plays left tackle, the Whitworth-Mathis matchup will be a battle between two of the league’s best. If it’s Collins, how he holds up against Mathis should be a good indication of how good that version of the Bengals line could be as it moves toward the playoffs.

Over in the NFC version of the playoff preview, there’s more certainty about getting to see two of the league’s elite go at it. Ndamukong Suh is again having an All Pro season, even if his sack total doesn’t reflect it. The Lions’ defense has played its best football over the past four weeks, which have included some of Suh’s best games of the season. He’ll have to deal with Evan Mathis on Sunday, who signed a nice extension with the Eagles this offseason after demonstrating he’s one of the best guards in the league while playing on the “prove it” deal he got after coming over from Cincinnati. Mathis may be the best run-blocking guard in the entire league right now — strong enough to dominate at the point of attack, mobile enough to get to players on the second level — and this game should involve plenty of running. The weather is supposed to be terrible in Philadelphia on Sunday, and the job Mathis can do against Suh should play a huge role in how well the Eagles are able to run the ball against a Detroit defense that hasn’t given up much on the ground all year.

The faces of the Panthers’ defense have rightly been those of Carolina’s past two first-round picks, Luke Kuechly and Star Lotulelei, but Kawann Short has also played a part in shoring up the interior of this defense. A second-round pick from Purdue, Short was billed as the pass-rushing complement to Lotulelei’s stout run defense, and that’s proven to be true in his first 12 games. Short is still just a rotational player for the Panthers, but he’s managed seven quarterback hits in fewer than 250 snaps. One of the keys to the Saints’ success in the Drew Brees era has been keeping a clean interior of the pocket for their (barely) 6-foot quarterback, and that means the ability of players like Short and Greg Hardy to collapse that pocket will be more important than it’s been all season. The Panthers have an almost spotless drafting record in the past two seasons, and it already looks like Short can be added to that list.

Cornerback-Wide Receiver Matchup of the Week

Typically, this is a section reserved for individual matchups, but it’s really too difficult to choose one here. Denver-Tennessee is a chance to watch maybe the NFL’s best group of wide receivers face off against the league’s best pair of cornerbacks. Alterraun Verner and Jason McCourty are the reason Tennessee is a top-10 team in pass-defense DVOA against opposing wide receivers. Both are having career seasons, and there have been games (see both outings against T.Y. Hilton) that they’ve been able to completely swallow the best receiver on opposing teams.

If the Broncos have proven anything in their two meetings against Kansas City, it’s that they’re going to find the matchup in the secondary they think they can exploit and go to it over and over. In that case, it was rookie Marcus Cooper. With Tennessee, it might be third cornerback Coty Sensabaugh, but there’s a chance that with Julius Thomas back healthy, the Denver passing game features a lot of both him and Knowshon Moreno. Tennessee is 24th in pass-defense DVOA against tight ends this season and 17th against running backs. McCourty and Verner should be able to take away some combination of Demaryius Thomas, Eric Decker, and Wes Welker, but the problem with Manning and the Broncos is their ability to attack teams from every spot on the field.