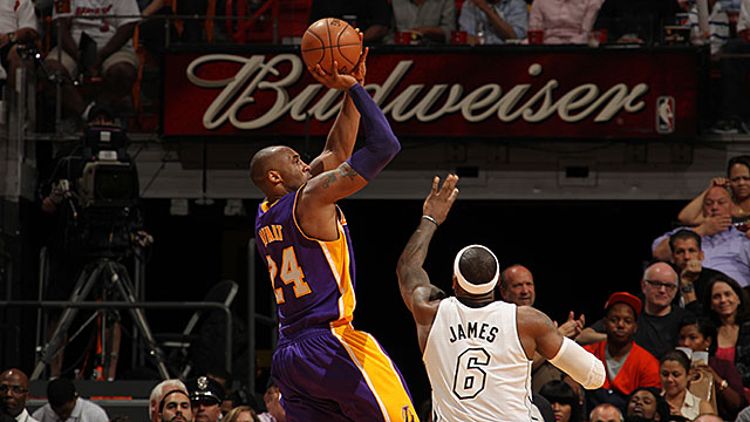 Imagine you are dropped into a random NBA game and a teammate throws you the ball at the elbow with three or four seconds left on the shot clock; there’s no time to make another pass, you must somehow generate a field goal attempt, and everyone in the arena — particularly the defense — knows this. This is something I like to call the Elbow Test: Can a player get a decent jump shot off in the face of a defender who knows you must shoot? Some NBA players, like Kevin Durant or Dirk Nowitzki, easily pass this test, but most do not. In fact, many of the NBA’s ugliest shots happen when someone is taking the Elbow Test.

But nobody can pass the test like Kobe Bryant.

This is the one thing Kobe can do better than any other person who has ever held a basketball: No matter where he is on the floor, or who is nearby, he can create a decent field goal attempt — many times without a dribble. He is a master of the jab step, the reverse pivot, the turnaround, the step back, the fadeaway, and the up-and-under. Drop him anywhere inside the arc, pit him against any defender in the world, and he’ll still find a way to pump, swivel, duck, twist, or lunge his way into clean airspace and release an above-average NBA jump shot.

Over the past seven seasons, no player in the NBA has taken more midrange jumpers than Bryant. A quick look at his shot chart during that window reveals an obvious truth: He will shoot from anywhere at any time. 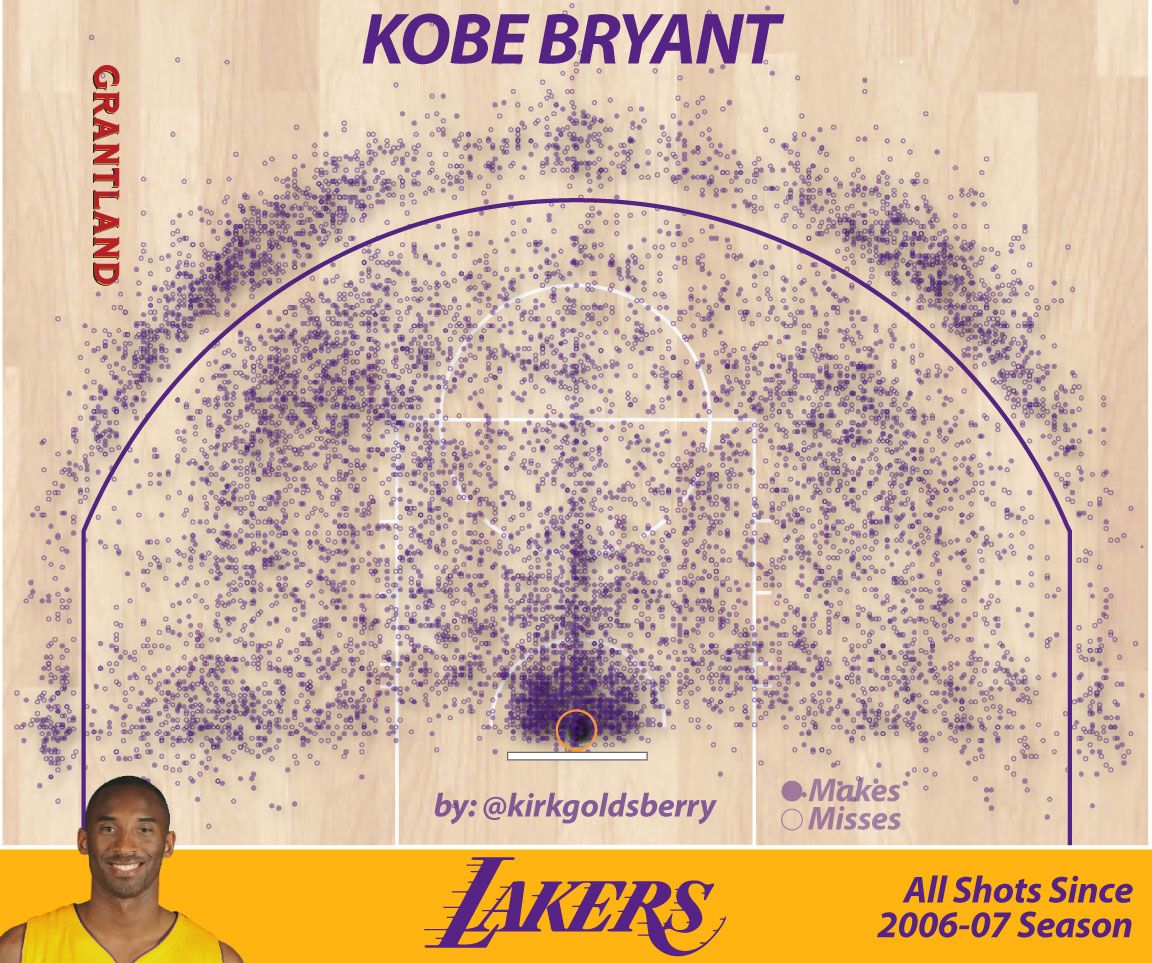 That’s a lot of dots. Since the beginning of the 2006-07 NBA season, Kobe has attempted 11,298 field goals; He’s made about 46 percent of them. Unsurprisingly, there is a cluster near the basket, where Bryant is still very effective, but beyond that and maybe some pockets along the wing 3s and near the elbows, all this chart tells us is that Bryant shoots a lot from everywhere, and we already knew that. 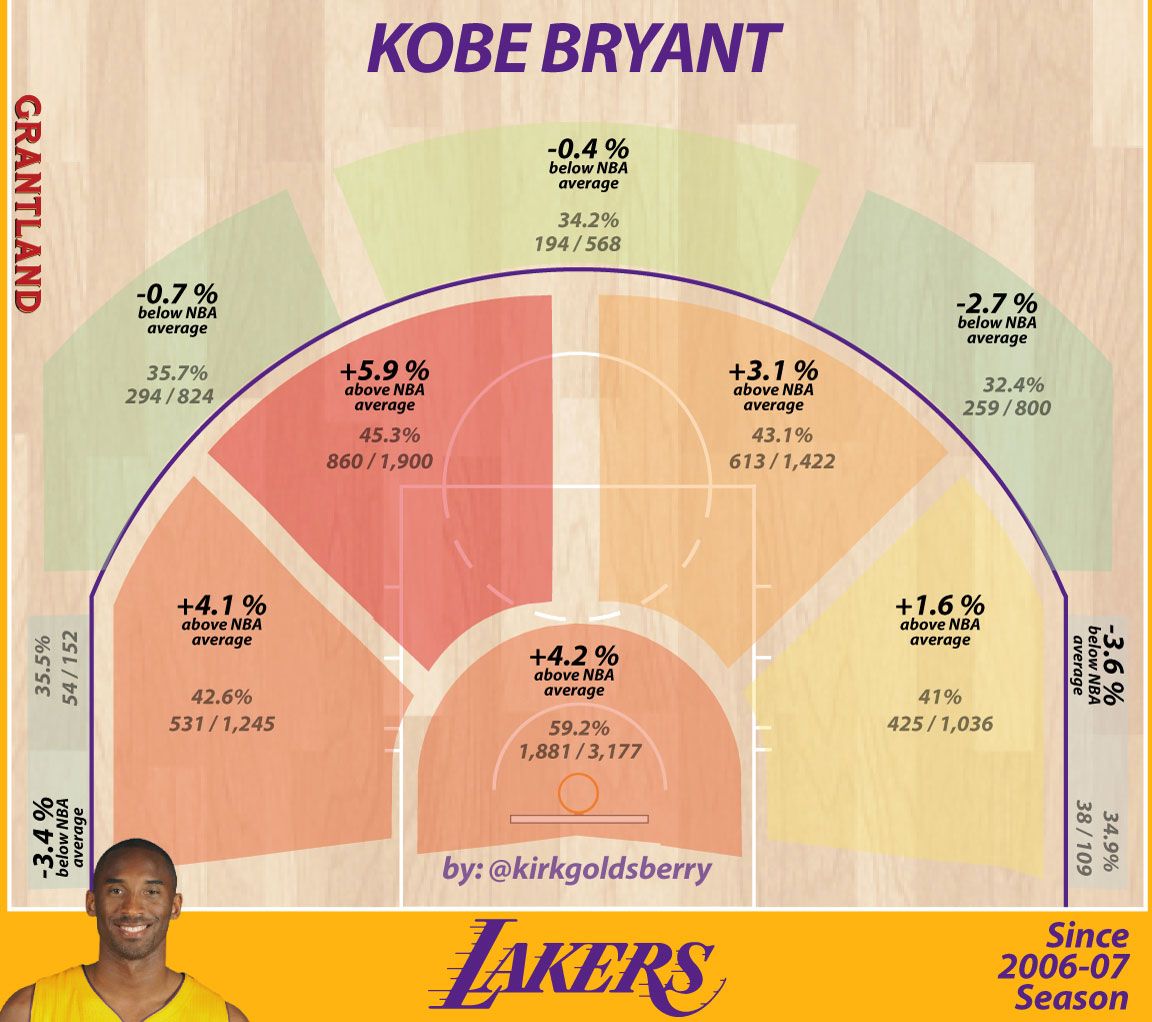 Breaking down further, a simple dichotomy becomes evident: Bryant is very efficient inside the arc, and below average — though not terrible — beyond it. Put another way, Bryant isn’t going to the Hall of Fame because of his 3s. As a younger player, he was a ferocious attacker who could also beat you with a soft pull-up. In his 30s, this has reversed, as he has become arguably the game’s cagiest jump shooter, who can still get it done near the basket.

Over the past six seasons, his favorite shot away from the rim has been near the elbows, particularly near the right elbow (graphic left), where he has attempted 1,900 shots, making 45 percent of them, which is 6 percent above the NBA average from that area. Six percent may not seem like a lot, but in baseball, 6 percent separates a .260 hitter from a .320 hitter, which is obviously significant.

Even those impressive efficiency percentages still obscure what makes Kobe the most remarkable midrange jump shooter in the league. It’s about the volume, you guys. Yes, he’s way above average near the elbows, but that Kobe can and does generate those jumpers at will is truly remarkable, especially considering he plays in a league full of defenders who have watched his moves for 15 years or more. Unlike other superstars who share an affinity for that deep elbow shot — catch-and-shoot bigs like Marc Gasol, Chris Bosh, or Kevin Garnett — Bryant frequently creates that shot for himself in the face of the defense. He employs those aforementioned ballet techniques and sneaky old-guy tricks to generate his own clean looks. Given the level of difficulty associated with the average Kobe Bryant midrange jumper, it’s stunning that his efficiency there is as good as or better than that of guys who simply catch and shoot open looks.

Due to age or Achilles, Bryant will likely be slower this year than in past seasons. However, if last year serves as any indication, his midrange game is sharper than ever. Last season, he was slightly less active in the midrange, but his numbers near the elbow were high even by his standards. 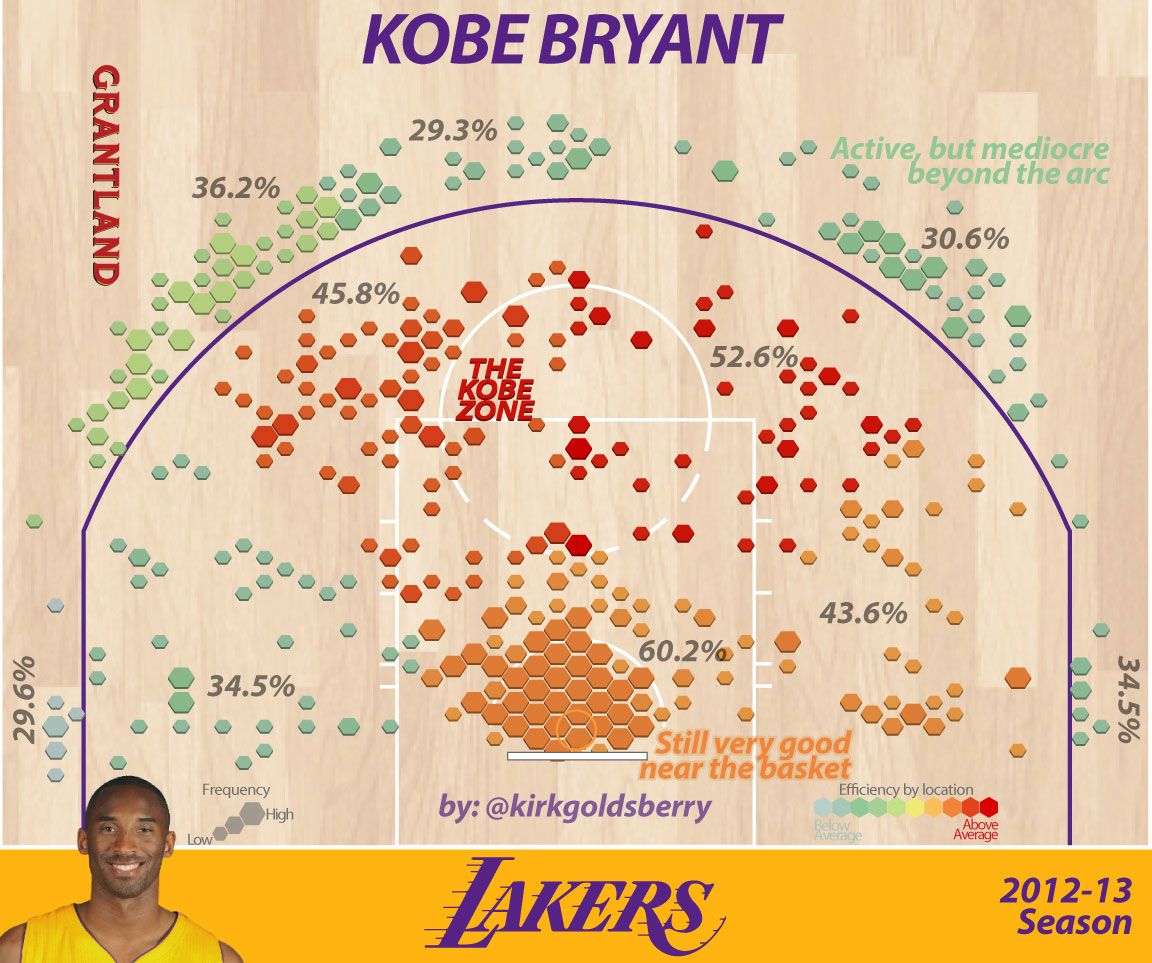 You don’t have to root for Bryant to appreciate him. He is a tireless competitor whose game has exhibited a fascinating evolution. If you have trouble appreciating Bryant’s greatness, I would suggest imagining yourself on one of those NBA elbows trying to get a jump shot off at the end of a shot clock, with a defender draped all over you. Welcome back, Kobe. I can’t wait to watch you take the test again.