We Went There: Watching Green Bay on Thanksgiving at NYC’s Best Packers Bar 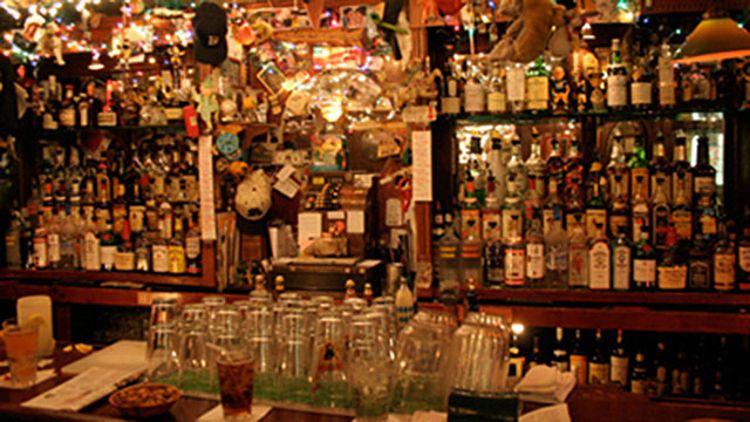 “A tie leaves one with a feeling of bewilderment,” wrote Patrick Daley on this week’s e-newsletter from Kettle of Fish, the Greenwich Village bar he’s owned since the ‘90s. “With Matt and Eddie leading the way, the lads bounced back from a depressing effort to put us in a position where we are in control of our own destiny.” Patrick’s newsletter, which is usually lengthy and peppered with this kind of Packerfied romanticism, was a glint of hope amid a mostly depressing season for the green-and-gold. A run that began with great promise — 5-2 through eight weeks, the two losses coming in close games to likely playoff teams — sputtered into a campaign plagued by injuries to pretty much every critical player, listless defense playing somewhere between two and two and a half quarters of football weekly, and a quarterback carousel that rifled through Plans B, C, and D with equal, stinging failure. I had a theory: Maybe some booze and Carmine’s-catered Thanksgiving food could dull the bitter taste of a seemingly lost season. Since I stayed in New York for Thanksgiving, I meant to test out this hypothesis and got on the C train to join my other family.

Kettle of Fish, which is perhaps the most unabashedly single-minded sports bar I’ve ever come across, has an interesting history. It’s well known as a storied hang for the Beats, given that its original location on MacDougal Street neighbored scene hub the Gaslight Tavern, and served as a sort of lobby for musicians or poets that might be performing there. By many accounts, Kerouac and Bob Dylan were regulars. Though it has moved from its original location, Daley — who worked as a bartender at the Fish before buying the naming rights in 1998 — kept it in the neighborhood, and it now sits tucked away on Christopher Street.The first thing you’ll notice about the Fish is, well, just how much Packers shit is in there; there’s pendants, beads, action figures, helmets, a signed picture of Willie Davis. When I interviewed Wisconsinite author Chad Harbach a couple of years ago, it wasn’t even a question where we would go (the interview quickly became a retrospective of Donald Driver’s career). It’s a welcome change from most* NYC sports bars, which arbitrarily affiliate for the sake of commerce. On regular game days, the bar serves summer sausage, cheese shipped in from Wisconsin, and Usinger’s brats. In case anyone could be confused, the Kettle overcompensates by flattening you with a dump truck of cedar-lined ‘sconi-ness. It’s a great bar.

Patrons routinely show up two hours before games to ensure seats, but on Thanksgiving Day, the Macy’s parade brought a fair share of tourists who seemingly knew telepathically to head to the Kettle for the game, which kicked off a little after noon. The degree to which Daley holds court at the Kettle would make King Arthur seem uncharismatic in comparison; dressed in his signature uniform of a Wisconsin state map T-shirt (it must be either a Rand McNally send-away or a roadside purchase), shorts, and long white socks, he’s hollering the whole game, talking some of the most polite shit the East Coast has ever heard.

Though he invited the two Lions fans at the bar to join in the communal “Bears Still Suck” sing-along, he was often bleating with joy at their expense as the Packers strung together some nice early drives and collected rare 2013 turnovers. He shook hands like a local politician, and when the food was delivered, he raced into the street to grab the boxes himself.

In the end, the Packers got blasted, but everyone got fed. People who had shown up alone were chatting with others, happy to find comfort among the portions of sweet potatoes, stuffing, and a complementary feeling of sinking numbness provided by the Packers secondary. “It’s a party,” Daley often writes in his newsletter, which has taken a more somber tone (terms like “excruciating” and “depressing” have become the norm), and despite a result that I can safely say put Packer Nation into the sports fan’s version of an existential crisis, it sort of felt like a party. The drinking helped.

Filed Under: Green Bay Packers, NFL, We Went there

How to Survive the Return of Kobe Bryant