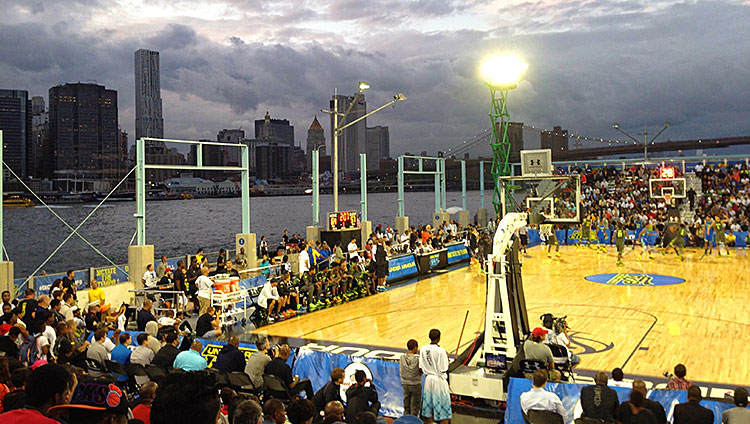 The tip of Pier 2, Brooklyn Bridge Park, jutting like a finger into the East River, is a pretty good place for a basketball game. It’s framed by the skyline of lower Manhattan and the regal presence of the Brooklyn Bridge. Tugboats, water taxis, and the odd old Yankee clipper ship plow the bottle-green surface of the river, under a sky threatening storm.

It’s here that the ninth annual Under Armour Elite 24 basketball game — showcasing the country’s best high school basketball talent, bedecked head to toe in Under Armour gear — was held last Saturday night. One part streetball scrimmage, one part brand indoctrination program, this is the front line of the sportswear cold war, in which Under Armour is the newest and fastest-rising belligerent.

One of the defining characteristics of basketball is the way the character of the game, even at the NBA level, is linked with the authenticity of its street iteration. Pros still make summer pilgrimages to Harlem’s Rucker Park, to Barry Farm of D.C.’s Goodman League, to upper Manhattan’s Dyckman League, and to L.A.’s Drew League, among many other places, to keep their daggers sharp and bathe in the patina of the grind.

It’s said that when a Roman general was awarded a triumph through the streets of the city, a companion would ride behind him in the chariot, reminding him that, despite the adulation, he was just a man. That’s what it means to play in the park. It’s like plugging yourself back into the heart of the real.

Plugging into the real makes sense for an upstart like Under Armour. Nike, with a reported 96 percent of the basketball-shoe market share, has its titanic Jordan-brand girth nestled firmly on the throne at Boardwalk and Park Place, sponsoring the Men’s Olympic Basketball Team and the Nike Hoop Summit. Adidas, with an anemic 3 percent market share, has its Adidas Nations global basketball camp and tournament (shouts to Dante Exum).

Way, way, way in the back, is Under Armour, with one quarter of 1 percent of the basketball market. A minuscule share, but actually double what the company had in 2013. How can Under Armour, with only 13 NBA players on its roster, including jewel-in-the-crown Steph Curry, compete with Nike’s 284 pro endorsers, including 40 All-Stars, or Adidas’s 77 NBA endorsers? The answer, in part, is here at Pier 2:

Get them wearing your swag in high school, and build it up from the streets, brick by brick, shoe by shoe. 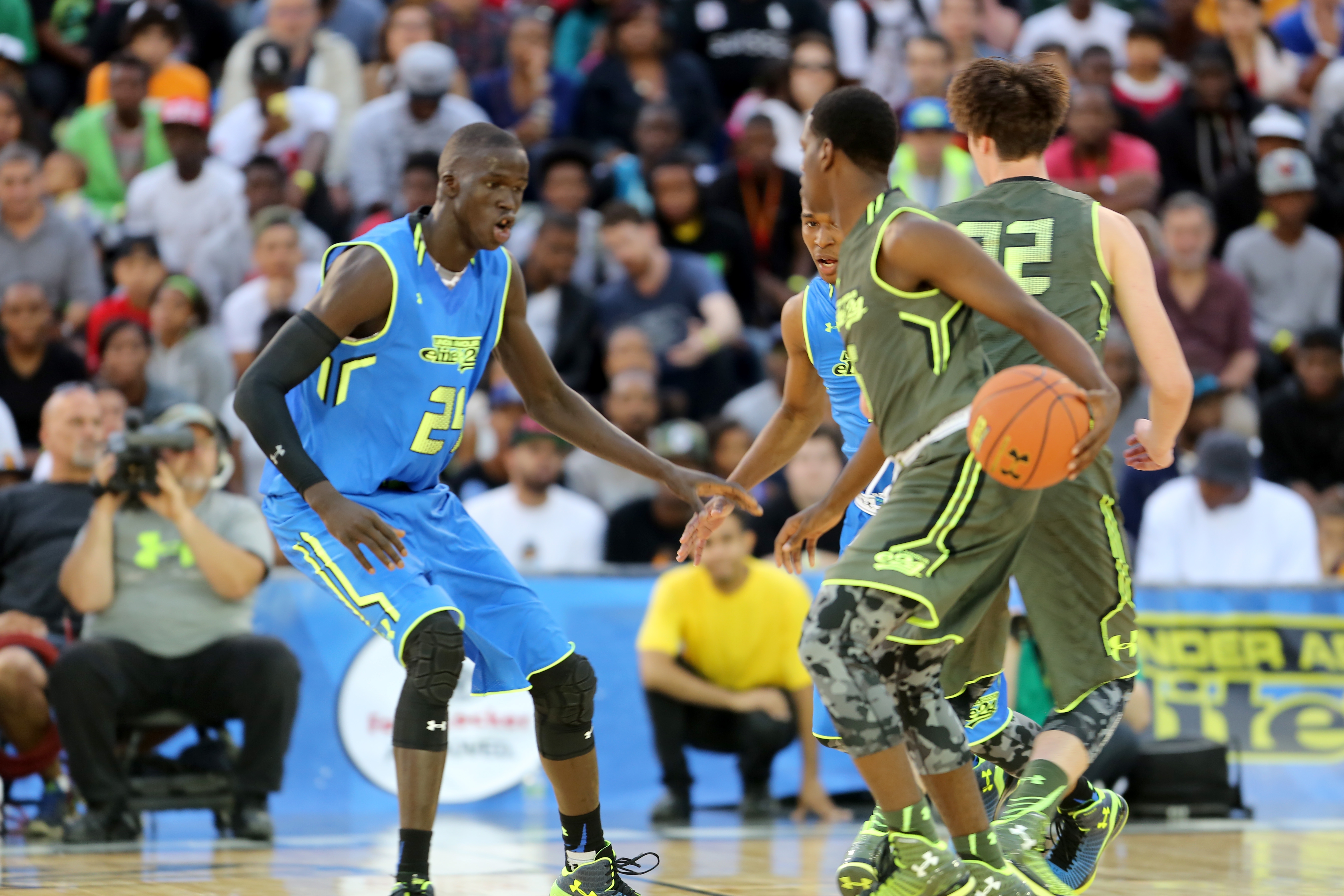 The first Elite 24 was held at the Rucker in 2006, and featured a number of players who would ascend to the NBA: Kevin Love, DeAndre Jordan, Michael Beasley, Kyle Singler (street nickname “Shampoo”), Brandon Jennings (Elite 24 single-game assist record holder), Tyreke Evans, J.J. Hickson, Cole Aldrich (“Cole Play”), Jerryd Bayless (“Pay Up”), and Lance Stephenson. The inaugural game was the focus of the documentary Gunnin’ for That #1 Spot, directed by the late Adam “MCA” Yauch of the Beastie Boys.

It wouldn’t be a playground game in New York without noted sneakerhead, author, streetball historian, and voice of the NBA Street video game series Bobbito García and Dyckman MC Joe Pope doing their signature patter on the mic. (Favorite Pope-ism, when a player dunks: “Finish him!”)

I went to the game with a couple friends, one who works in the anonymous lower rungs of an Eastern Conference NBA team, and one who works in marketing for a company that counts a well-known athletic brand among its clients.

To listen to them talk shop was to glimpse the hidden trenches of the sneaker war and the various agents and dealmakers who fight in it. You’re not sure what’s just gossip, and what’s conspiracy, because everything seems vaguely plausible. Does Nike really rig the player selection process for Team USA? “The only way to make that team, unless you’re a star, is to be with Nike. As soon as they need someone, the first guy they call is Nike soldier Rudy Gay? Yeah, OK,” said my Eastern Conference friend.

“This is the only place where you’ll see Nike people at an Under Armour event,” said my marketing buddy. Later, he’d point out some folks he said were Roc Nation agents sitting courtside.

The players might be the draw, but the real game is the branding. The Under Armour double parabola logo was everywhere, on everything. Free Under Armour swag — shirts and bracelets — got launched into the crowd at every break in play. The players themselves, decked in UA shoes, socks, shorts, jerseys, and headbands, threw shirts into the stands during introductions, with Philly’s Derrick Jones (class of 2015) rocketing one up and over the outstretched hands of the kids at the top row of the sideline bleachers. Kid is playing the wrong sport.

Even the coaches got in on the act, with Naclerio attempting to throw a shirt to the baseline stands, only to have it blossom like a parachute and flop to the court, about two feet away from him, all to the full-throated mockery of the youth in front of me.

At one point during a timeout, a teenager a few rows in front of us went full wide receiver, fading to the corner to lay out for a shirt, ending up with his legs draped over some guy’s shoulders. Gotta get ’em young.

Any all-star game, especially a high school all-star game, is less about the game itself than about fragmentary moments of athletic brilliance. You watch a game like the Elite 24 essentially as a scout might. Forget who wins and who loses. It’s who’s long, who’s athletic, who makes it look easy. One thing elite high school athletes make look easy: dunking. Like, “where’d the gravity go?” easy. The pregame layup line was a riot of off-the-glass alley-oops, 360s, reverses, and high-toss-to-yourself power spikes, all of which set the tone for the game itself. And, anyway, this was not a basketball showcase; it was a brand showcase, and Under Armour made the most of it.

This was not the kind of setting for a player like, say, Stephen Zimmerman (Joe Pope nickname: “Guitar Hero”), a skilled stretch big, whose talents are more suited to a structure and ball movement. Defense was largely a myth until very, very late in the second half, and then only because Bobbito García had chided the players over the mic that the three total blocks (with 10 minutes left) would set an Elite 24 anti-record. There were, by my count, zero screens set. At least on purpose. But there were dunks. Oh, were there dunks. Twelve of Team Freedom’s first 14 points were off dunks, mostly alley-oops. I counted 24 dunks in the first half alone. When Antonio Blakeney (class of 2016) laid a pass up instead of dunking it, Bobbito warned him, “This is New York, you at least gotta slap boards.” NYC’s basketball talent base may be shrinking, but the attitude is going nowhere. The highlight dunk of the entire evening would have to have been Team Liberty’s Donovan Mitchell (committed to Louisville) catching a half-court pass from Derrick Jones, cocking it back to his ankle, then throwing it down.

With 1:44 left, the sky let out a few petulant sprinkles, and the game was called. The last thing anyone wanted to see was an injury. Team Liberty 127, Team Freedom 116.

“You know, Durant pulled out of Team USA because of he’s renegotiating his sneaker contract,” my one friend said, as we walked out under the Brooklyn Bridge.