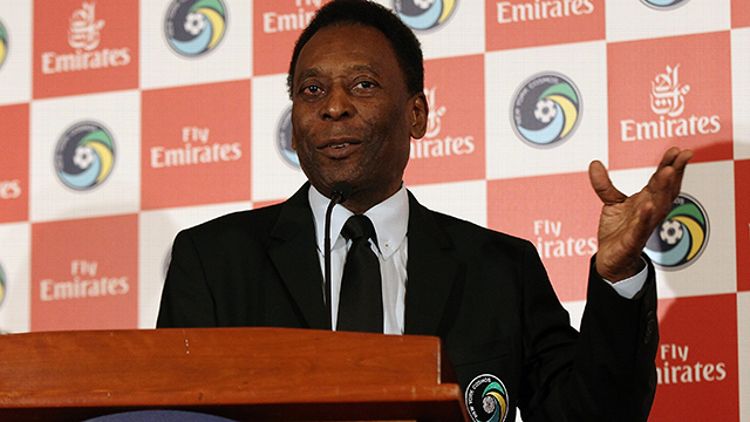 Two attractive women stand as still as statues at the front of a conference room in the midtown Manhattan Four Seasons. Each one wears the beige dress–maroon hat combination of an Emirates Airlines flight attendant and stands next to a soccer jersey that bears the name of the carrier front and center and the crest of the New York Cosmos higher up on the left breast. In August, the team that briefly took over the United States sporting consciousness in the 1970s will return to the field as a professional entity, playing in the second-level North American Soccer League (NASL).

Ostensibly, suits and journalists pack the event because it is the announcement of a lucrative sponsorship deal and partnership between the two organizations. But really, most of them are here to see one man: Pelé. The Brazilian, who led the Cosmos to the NASL championship in 1977, is the honorary president of the new-look squad, which hasn’t played a competitive match since the mid-1980s.

The team occupies the awkward position of trying to embrace the past — enter Pelé, the best reminder of the club’s glorious, glamorous history — while building excitement and momentum for the near future. Posters around the room show Franz Beckenbauer, the German star who played center back on those teams of the 1970s, along with the slogan “Don’t call it a comeback,” which is fine, except a comeback is exactly what this is. The Cosmos, after all, haven’t existed in any relevant on-field form for nearly 30 years. Until August 3, when they open against the Fort Lauderdale Strikers, they are a hope, a dream, and a clothing brand.

But they are a big brand, arguably the third-biggest in the country behind the Mexican and United States national teams. They (again, see: Pelé) have enough pull to get a roomful of people to wait patiently. The announcement is supposed to start at noon, but at 12:15, Shep Messing — the former Cosmos goalkeeper, provocateur extraordinaire, and MC of the afternoon — announces that “we’re running on Brazilian time.” The models behind the stage continue to stand perfectly still.

Fifteen minutes later, the room grows quiet and Messing finally introduces “the man who was, and always will be, the heart and soul of the Cosmos, Edson Arantes do Nascimento. Pelé.” The 72-year-old walks to the stage, limping a bit but otherwise looking good. “How are you?” he asks one of the flight attendants as he passes her on the way to his seat. She smiles and, perhaps, blushes. Pelé can still break down opposing defenses.

Cosmos chairman Seamus O’Brien, head coach Giovanni Savarese, and Emirates’ wonderfully titled divisional senior vice president of revenue optimization and distribution Nabil Sultan flank the Brazilian. But they are mere spectators. That sound you here is the sound of a dozen photojournalists shooting as fast as they can and dozens of other people snapping shots on their camera phones. (The number of attendees in the room who walk around showing off old pictures of themselves with Pelé is both remarkable and remarkably weird.)

The event, part of the rollout of the Cosmos, is a big deal for the team. The Emirates sponsorship indicates the marketing muscle they still have. The airline also sponsors AC Milan, Arsenal FC, Paris Saint-Germain, and, as of last week, Real Madrid. Those uniforms stand on display at stage right and stage left.

Pelé: “We are here to come back. We ask for your help. New York is back. We are going to start. I am part of this. We work hard to make this possible.”

Sultan: “This is a brand we can work with and hopefully grow.”

O’Brien: “I’m also the first to admit that the extraordinary history and heritage of this great club, which still so dominates the landscape of soccer in this country, provides us also with a very huge legacy that we have to live up to. But it is a challenge that the team of today is committed to being able to meet.”

O’Brien again: “We look forward, of course, to seeing you all at Hofstra on August the third when the New York Cosmos will once again take the field in a competitive match against our historic rivals the Fort Lauderdale Strikers and we begin our journey back to the top.”

“Back to the top” is another theme of the afternoon, but no one seems to want to — or is able to — articulate exactly what that means beyond a series of meaningless platitudes. The Cosmos will not play in Major League Soccer. O’Brien says he and MLS Commissioner Don Garber talk on a regular basis, but for the near future at least, the club’s aspirations run parallel to those of the best league in the country. The Cosmos hope to elevate the NASL, which plans to have 12 teams next season and 18 by 2018. The squad will be free of MLS’s restrictive and confusing player policy and able to sign any players it can convince to join. It has 15 players on the roster now, a mix of college athletes, MLS castoffs, and older players from lesser leagues around the globe. On the podium, Savarese denies rumors that 36-year-old Spanish playmaker Marcos Senna would leave Villarreal for the Cosmos, but I overhear a man in a Cosmos green tie telling another staffer that the midfielder was going to be announced soon, possibly Thursday. Take that for what it’s worth. The Cosmos hope to play in a $400 million project at Belmont Park and think three teams in Greater New York City won’t be too many. Economically, this is probably correct; realistically, however, it’s another debate entirely.

But that’s for the future. For now, it’s safe to say that this ownership group has made significantly more progress than the previous one that brought the team back in 2010, but failed to do anything beyond establish a lavish headquarters and throw a few good parties. Sports Illustrated’s Grant Wahl, not a reporter prone to overreaction, wrote that the organization was “busy lighting $10 million in cash on fire,” and he was probably being kind.

In two months, the Cosmos will try to buck the odds and once again to be the biggest thing in American soccer. “I want to wish very good luck to my friend, Giovanni,” Pelé said, a nod to the Cosmos’ head coach. “Giovanni, [it’s a] tough job, but we trust you.” But frankly, it will be much easier to do well in the NASL than it will be for the management team to reach the top of American soccer, wherever that might be.

Men in Blazers: The Special One Returns