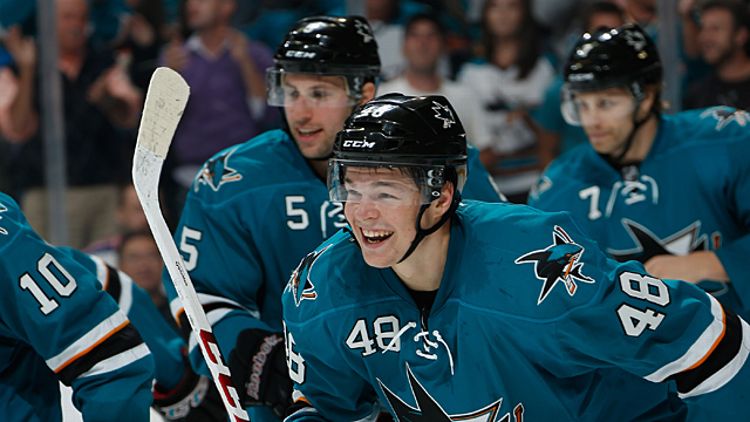 Tomas Hertl’s first goal of the evening sent Rangers goalie Henrik Lundqvist packing. After his second, he stole a happy glance up at his mom and girlfriend. The Sharks were dismantling the Rangers and it was starting to get late when the young Czech rookie scored again. Still, no one at the SAP Center (née HP Pavilion) minded even when it took arena crews a few extra minutes to corral all the hats and remove them from the ice. It was only the 19-year-old’s third NHL game, after all, and who could resist that wide smile?

If Allen Iverson played hockey, he would have scored this goal. Steel yourselves, children’s hockey coaches everywhere, to lose thousands of kid-hours going forward in the pursuit of this goal. The only thing more fun than seeing it was sitting next to Larry Brooks in the press box while he watched this goal.

“That’s something I don’t have in my bag,” Sharks captain Joe Thornton said.

The atmosphere had that universal slaphappy vibe that develops whenever any group of people is collectively and unexpectedly given something for free. Sometimes it’s bagels in the break room, other times it’s a Chevy Volt at a taping of Oprah, and in this case, it was that “Wait, this kid’s on our team?” realization in the middle of trouncing New York.

Hertl’s four points Tuesday night brought his scoring total to seven on the season, placing him technically atop the league. (Yeah, yeah, we’re talking two, three games here, but just indulge it; what else are the first few weeks of an 82-game season for?!)

As if that weren’t enough, there was his charming, fractured-English postgame interview. “This is dream,” he said, “No reality. I’m happy and crazy and I don’t know and big game and this is dream.”

There was the “Teenage Mutant Ninja Hertl” insta-nickname, which the good folks at NHL.com were all too happy to take and run with. There was SportsCenter declaring the goal its top play of the night. And there was the adorable confusion surrounding his beside-herself mother: Why was she wearing Patrick Marleau’s jersey, anyway? (It was actually the no. 12 jersey Hertl was given for being drafted in 2012, though the Marleau detail would have been so very San Jose.)

“Crazy,” he repeated later in the locker room, in between posing for photos with his four pucks and being personally congratulated by Sharks GM Doug Wilson. “This is a dream.”

But a perfectly timed interview done in Hertl’s native language helped shine a light on the player San Jose drafted 17th overall in 2012. With the help of a Czech journalist interpreter, the San Jose Mercury News’s David Pollak spoke with Hertl about how he always needs a lift to practice, and about what he has in common with his homeland hero Jaromir Jagr.

“Both of us have big bottoms and I just try to use my big bottom as Jagr does,” Hertl told Pollak.

Some old-school eyebrows may have been raised by Hertl’s dangles, but on Tuesday night, Sharks coach Todd McLellan said there was no disrespect intended.

“He’s a passionate young man and I’m not even sure if he realizes where he is,” McLellan said. “He’s innocent out there … our game needs a little bit of that.”

Should he have gone for such a flashy move, McLellan was asked.