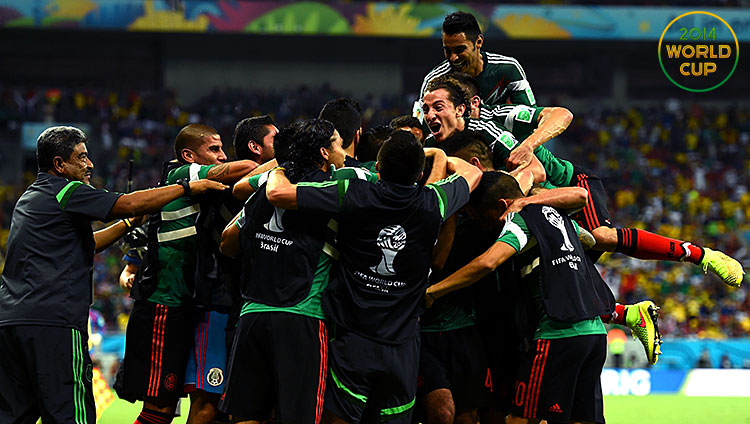 The “Meh-he-co” chants drowned out the AC/DC blaring from the speakers at Arena Pernambuco as the kickoff of El Tri’s match against Croatia drew closer. When the 15-by-25-foot LCD screens showed the starting lineups, the Mexican fans hurled their favorite FIFA-sanctioned slur at the head shots of their opponents.

When it was their team’s turn, the supporters reserved their two biggest cheers for Guillermo “Memo” Ochoa, the goalkeeper who went “you shall not pass” against Brazil, and Miguel Herrera, the irrepressible pudgeball of a manager who took over El Tri in October and led them to the World Cup. It was loud, perhaps not surprising since the stadium was 70 percent green jerseys. El Tri’s fans travel. Even the Croatian supporters’ section on one end of the field had more green than red-and-white checkered shirts. (To their credit, the Croatian fans stood the entire match. They were outgunned and outmanned, but not outworked.)

The inevitable ebb and flow of a World Cup game becomes even more pronounced when one side has a decided numerical (and/or decibel-level) advantage in an arena. These matches are better, or at least more fun, when the true and passionate supporters of one or both teams outnumber the people from the host country and the corporate interests. You have to fight the Super Bowlification, after all.

But when Mexico failed to score early on, the energy leaked out of Arena Pernambuco’s open roof. The buzz dropped from thousands of bees to hundreds. Across the country, Neymar scored for Brazil, then Cameroon’s Joel Matip tied the game, then Neymar scored again, and the neutral Brazilian fans watching Mexico-Croatia started cheering the efforts of their countrymen. Croatia’s tiny group kept standing, mouths firmly closed.

Because it was a Monday, Mexican captain Rafa Márquez picked up a yellow card. Because there was a referee present, the defender continued to complain about some perceived slight on the other end of the field, well after Croatian captain Darijo Srna skied the subsequent free kick over Ochoa.

At halftime, five sprinklers popped up and watered down the pitch, while all 12 Croatian reserves showed off their considerable ball skills. One player stood in net while the backup keepers took shots. It looked like fun, but also very much like a team expecting to go home. Croatia’s lineup features players from Real Madrid, Bayern Munich, and Sevilla, and its reserves play for Inter, Shakhtar Donetsk, and Monaco, among others. You wonder why they aren’t better, and then they go Lance Stephenson and, I don’t know, maybe the struggles start to make sense.

Then again, considering neither team managed to hit the target during the opening 45 minutes, perhaps bringing on Oliver Zelenika or Danijel Subasic wouldn’t have been the worst idea for Croatian manager Niko Kovac.

The stands were half-full when J.Lo finished dancing on the screens above the stadium and the second half began. Kovac’s white button-down shirt was unblemished, and his slicked hair was immaculate as he watched from the corner of his technical box, hands clasped behind his back. He had very shiny shoes.

Herrera, fully adorned in a black suit, green tie, and matching green El Tri emblem on the pocket, looked — and I mean this in the nicest way possible — like the kind of guy who might sell you a used car that would run for a good seven or eight years. You might go to a BBQ at his house. He cuts an unlikely figure of someone telling Chicharito to enter a hugely important soccer match, which he commanded in the 62nd minute.

In Brasília, Fred scored to make it 3-1 Brazil, but the crowd in Recife was back, reawakened by Javier Hernández’s introduction, Srna’s uncalled handball in the box, and Croatia’s growing desperation.

Cue Márquez, because why not? He rose up to meet a corner kick and headed it into the net past a helpless Stipe Pletikosa. In doing so, Márquez, who is a central defender, remember, joined Cuauhtémoc Blanco, who is basically an Aztec god, as the only Mexican to score at three World Cups.

Andrés Guardado added the insurance goal three minutes later, blasting home a left-footed shot. While the starters and reserves raced to the corner flag, defender Paul Aguilar ran to Herrera, jumped into his arms, and they both crashed to the ground. The coach returned to his feet, only to be embraced by Ochoa and suffer a similar fate. He won’t mind the cleaning bill.

If it was an evening of ending frustration, then Chicharito’s tally in the 82nd minute served as the perfect coda. After — who else? — Márquez flicked on a header, the Manchester United forward emphatically put the ball into the net. He also sprinted to the corner flag, fists raised in the air as if lifting the weight off his shoulders.

Ivan Perisic would get a lone goal back for Croatia, giving it the slightest chance, which was then extinguished when Ante Rebic went studs up on Carlos Peña and saw red. Rebic would miss the next match, which doesn’t exist.

On Sunday, a reporter asked Luka Modric about scoring on Ochoa, specifically whether his teammate and Bayern Munich star Mario Mandzukic could get one past the Mexican netminder. “All respect to Ochoa, he’s scored against even better goalkeepers,” the midfielder replied. 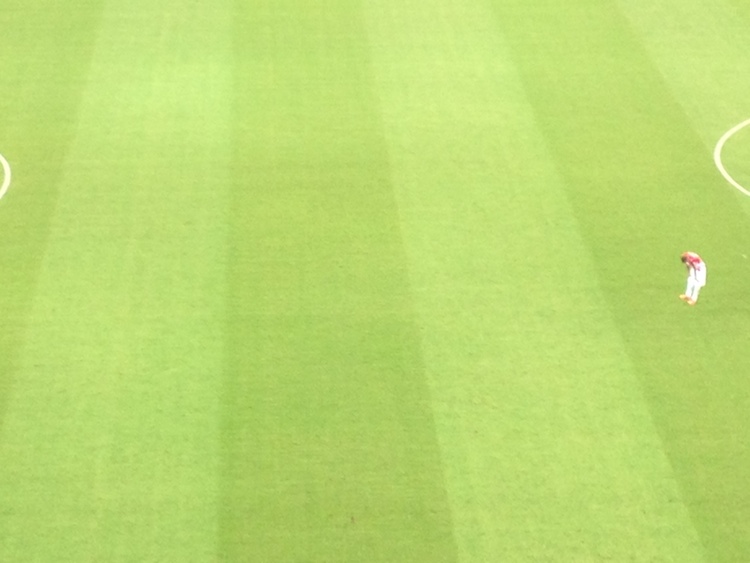 After Uzbek referee Ravshan Irmatov blew his whistle, putting the match into the record books, Mexico through to play the Netherlands in Fortaleza on Saturday, and Croatia on the next plane home, Mandzukic kneeled over by himself on his attacking side of the field. He was exhausted and crushed, alone, surrounded on all sides by green grass.