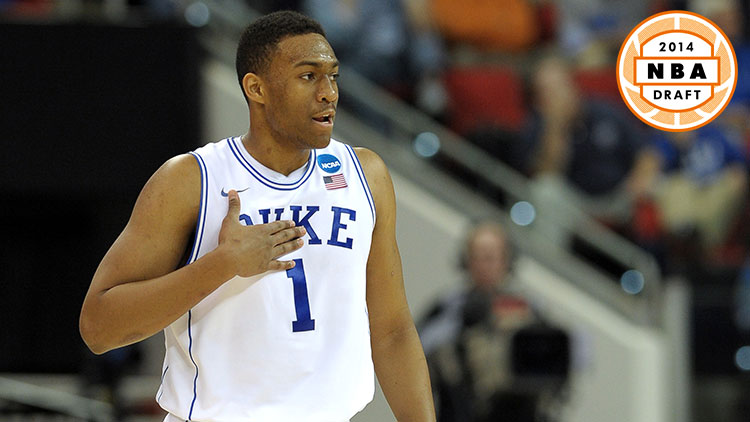 ESPN’s Chad Ford joins Bill Simmons to discuss the 2014 NBA draft, including injury concerns, possible trades, and players to look out for.

Below are some excerpts from the podcast:

Bill Simmons: I watched him work out a week before you, and I thought he was a 7-foot-1 Serge Ibaka. I was blown away. Which, you know, people have gotten in a lot of trouble over the years getting blown away by a workout, but he just seemed like such a great athlete, super coachable. I love the way he carried himself, he was making jokes. I liked everything I saw — could shoot with both hands, he could shoot 3s, and I left that workout thinking there’s no way that guy’s not going to be the no. 1 pick. And now he’s not going to be the no. 1 pick. I still don’t think he goes lower than three.

Simmons: I can’t imagine he doesn’t go in the top six. If Boston passes on him, I’ll be pissed.

Ford: I think Jabari is going to be good. But look, he weighs 255 right now. That’s big for a small forward. He’s been working out in L.A. for what, the past eight weeks with a professional trainer? I’m not sure his body type is the type that slims down when he’s lifting weights and working out … he’s going to be a big guy. That’s his body speaking. I know the Bucks especially are looking at him and projecting him to be a 4 in the league, not a 3. Offensively, he would play much more like a 3, but defensively, they felt like he had to play 4. And that scares me a little bit.

Simmons: I think he’s a stretch 4. Ultimately, if you’re winning with him, that’s where he plays.

LeBron to … the Warriors?

Ford: If you have Steph Curry, and if you have Kevin Love, why isn’t Golden State a compelling destination for LeBron?

Ford: Great market. Steve Kerr is a good coach. Steph Curry, Kevin Love, two players that are better right now — Steph Curry is better than Dwyane Wade, Kevin Love is better than Chris Bosh. Golden State, if they do that [Klay Thompson and David Lee] deal and don’t take on [J.J.] Barea, can move Andre Iguodala to a team with cap space. They can move him. They can move Harrison Barnes to a team with cap space if they need to. Or they can do a deal with Miami if they wanted to do a sign-and-trade or what have you. They could get LeBron in.

Simmons: Interesting. Miami isn’t helping them, though. If I’m Miami, I’m going down with the LeBron ship.