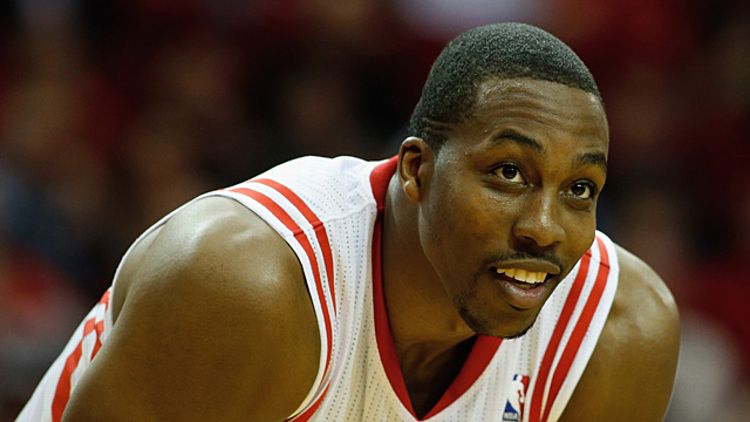 What the hell was that? What was supposed to be a grudge match featuring the league’s highest profile free agent leading the league’s most rapidly ascendant team to a victory over his depleted former team turned out to be a nightmare in Houston. It was an ugly exposé of what might be gaping holes in the Rockets’ ability to win basketball games.

This was supposed to be the game when Dwight Howard would demonstrate to the Lakers just how much he loves his new team, and how much brighter his future is in Houston than it would have been in Los Angeles. Just before tipoff I saw one Houston fan desperately trying to get the camera’s attention with a teasing hand-drawn sign that read, “HEY, L.A. — MISS HIM YET?”

What an interesting question that has become …

Howard does not possess the kind of personal intensity that fuels those awkwardly fascinating “reunion” games in the same way that guys like Kevin Garnett do. In addition, Kobe Bryant — whose mere presence could have energized the entire Toyota Center for days — was not in the gym, and the atmosphere around the game was utterly blasé. At tipoff it really did feel like an ordinary November NBA game.

It looked like one too. As a whole, the play was extremely sloppy, but nothing was as careless as Houston’s sorry excuse for perimeter defense. Some of its guards looked lost, and others looked incapable, but nobody’s defense looked as bad as James Harden’s. It was pitiful, prompting the great Haralabos Voulgaris to tweet the following:

James Harden has resorted to just letting his man get past him and trying to poke the ball loose. Ole style.

I’m not sure the HOU defenders know the left side of the 3 point line even exists.

Houston’s defense was so bad that at one point I wondered whether it thought closing out on 3-point shooters might be considered “illegal defense.” By the end of the first half the Lakers had 64 points, despite only converting 13 of 34 2-point attempts and taking only six free throws. Houston’s defense was playing well when inside the arc, but it was plain dreadful beyond it. In the first 24 minutes, the Lakers made an insane 11 of 14 3s. Don’t get me wrong, their shooters were hot, but the kinds of looks they were getting were very juicy, even by early-season NBA standards.

The Rockets regrouped in the third quarter and launched a strong comeback. They played better defense, holding Los Angeles to just 17 points. Howard had played great defense all night, stymieing Pau Gasol, who was once again settling for those atrocious 18-foot jumpers that everyone in Los Angeles not named Mike D’Antoni wants him to stop taking.

Although the Rockets still trailed by a few points, the mood was very optimistic and you could sense that the better team was about to assert itself and take over the game. Harden went on a tear and reminded everyone how good he can be. With four minutes remaining the game was tied at 91, but the momentum (that’s right, Barnwell) belonged entirely to Houston. Chandler Parsons scored on a huge dunk to put the Rockets up by two; the crowd went bonkers. It was the exact kind of basket that permanently deflates an overmatched road team in a normal November NBA game.

But that’s when shit got weird.

It was time for hack-a-Dwight, that bizarre and ruthless tactic that reduces the beautiful, fluid game we all love to a god-awful free throw contest. The idea is to lengthen the game and reduce the value of your opponents’ possessions by fouling a man who can’t shoot free throws very well. This technique rarely works, so we don’t have to watch it too often. But in the ultimate twist of the evening, D’Antoni, who’d watched teams employ it against him all last season, decided it was his turn for revenge.

He was about to introduce Rockets fans to one of Howard’s biggest flaws, stealing the game in the process.

Howard missed seven of his 12 fourth-quarter free throws, letting the Lakers stay in the game despite their sudden inability to make shots. After making 12 of their first 15 3s, the Lakers missed 16 of their next 18. But their 35th 3-point attempt of the night would provide the night’s most iconic moment. Steve Blake drained one of the biggest shots of his career — and he has had some big ones — from deep along the left wing as Howard frantically and fruitlessly lunged in his direction. As the ball went through the net, a few sobering realities fell upon Houston.

Reality 1: The Rockets play bad perimeter defense, and that will cost them games. Harden does not bring the same energy to both sides of the floor. He’s a great athlete and a heady player, but it’s his will to burn calories playing defense that is highly questionable.

Reality 2: Howard’s continued inability to make free throws will be a liability for whatever team he plays for. It’s the biggest hole in his game and will haunt his entire career if he can’t improve it.

Reality 3: The Lakers had just beaten the Rockets in Houston without Kobe.

Rockets fans have seen a lot of wins and losses, but perhaps they had never seen a loss quite like this. It began with an abysmal defensive performance and ended with an unlikely comeback made possible in part by their new superstar’s inability to make free throws. These are problems. A few weeks ago it was easy to find people predicting great things for the Rockets franchise, and those things still might come, but they won’t come without some big adjustments.