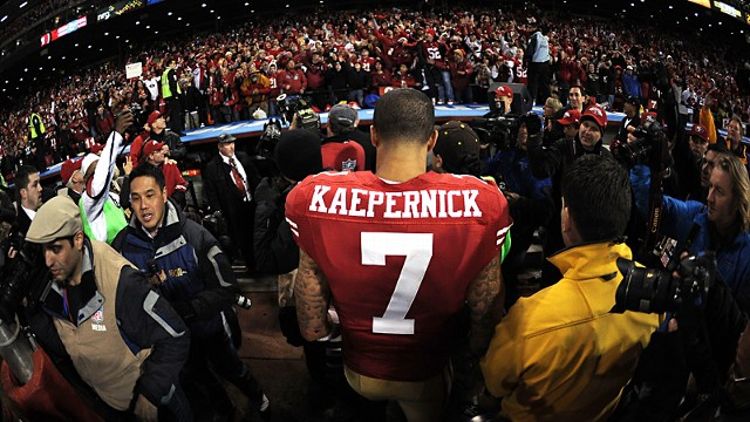 Kevin Greene walked through the tunnel, hands in pockets, eyes fixed on his feet. As some players jogged and some players sulked, the coach of the Packers’ outside linebackers — a group tormented by Colin Kaepernick all night — kicked at the ground in front of him. He was halfway to the locker room when he finally looked up, took a breath, and exhaled.

The thought when Kaepernick became San Francisco’s starting quarterback was that where Alex Smith’s Niners were a safe team reliant on defense and error-free football, Kaepernick’s version was capable of delivering such a 45-31 bludgeoning. As the Packers left the field Saturday night, they looked like a team that had seen the business end of Jim Harbaugh’s vindication.

There are times when watching a game from press row can actually be detrimental, the glass creating a hermetic box that leaves the only connection to the crowd as the reverb along the metal. The advantage is the ability to see the whole field, and in San Francisco on Saturday night, I was thankful for that vantage point. On his way to 444 total yards — the 181 on the ground good for a single-game quarterback record — Colin Kaepernick became the playoffs’ biggest revelation, and watching from that perch gave a rare moment of anticipation as those patches of field opened. When they did, they were more consumed than covered, and while the speed and the big arm had shown up in flashes in Kaepernick’s first six starts, the degree to which they could all come together hadn’t been fully understood. Whether it was a scramble, a designed run, or a throw downfield, Kaepernick did whatever he wanted, and the extent of his dominance was most evident in how hapless it left the men on the other side of the ball.

It started early. And Erik Walden got it the worst. With a third-and-2 about halfway through the first quarter, and Walden chasing Frank Gore on an option read, Kaepernick pulled the ball and took it around right end for 13 yards and a first down. Two quarters later, San Francisco ran the same play, except this time, with fullback Bruce Miller sealing off Walden, Kaepernick took it 56 yards for a touchdown.

The most telling moment of the Packers’ night came at the expense of its best defensive player. With about 10 minutes left in the fourth quarter and San Francisco up 38-24, the 49ers ran a read option to Clay Matthews’s side. As the long-haired All-Pro stepped toward the running back, Kaepernick pulled the ball and took it around the left side. Matthews, realizing he’d guessed wrong, spun back toward the quarterback. Before the play was through, he’d finished a full pirouette in the middle of the Candlestick turf, the league’s Hulk turned into an extra from Black Swan. This was the scope of Kaepernick’s sorcery on Saturday night. The principle of the 49ers’ offense, much of it borrowed from Kaepernick’s time at Nevada, is to ensure that the defense is always wrong. And Green Bay’s always was.

Where others were solemn as they left the field, A.J. Hawk — helmet still on — tore away at the tape wrapping his right wrist. Fifteen minutes and one shower later, his anger had turned to bewilderment, and perhaps the only thing more difficult than stopping Kaepernick’s read option was explaining it.

“They do a great job of being deceptive with it,” Hawk said. “We saw a little bit of …

The Pistol formation and the read option will be the story in the NFL this week, as they have been throughout most of the season, but early on, it had little to do with Kaepernick’s running all over the field. On San Francisco’s first drive, an interception returned for a touchdown made it look as if the quarterback’s freelancing style might do the Niners in against a smart, experienced Packers defense. By its second, it was clear that Kaepernick’s ability to tuck the ball and run would be the most dangerous element of his offense. The drive was ignited by a 45-yard pass to Frank Gore that Kaepernick, after scrambling to his left, lofted up the sideline. It was capped off by a 20-yard scramble for a touchdown.

“Our issues were bigger than [the read option] with Colin,” said Packers coach Mike McCarthy. “We did not do a very good job of keeping him in the pocket. He was able to get out of the pocket for a number of big conversions there in the first half. We weren’t able to get off the field and try to make some adjustments in our defensive calls, pass-rushing lanes, and so forth.”

Before Green Bay could adjust — mainly by abandoning its man coverage and spying the quarterback — the Niners’ game plan shifted. After dropping back to pass 30 times in the first half, Kaepernick leaned on the option in the second. With the Packers worrying how they could contain Kaepernick in the passing game, the Niners began to pound with their running game. The Falcons managed to control Marshawn Lynch in Atlanta yesterday, but the varied approach of San Francisco’s ground game is far from Seattle’s.

Watching Kaepernick tear up the Candlestick Park turf, it was hard to ignore the stadium’s age. Even from a distance, the weathering of the concrete is evident. In the south end zone, seats from the original baseball stadium extend underneath the grandstand on the east sideline. Soldier Field and Lambeau were built earlier, but with recent renovations, one has become a spaceship and the other a cathedral. Candlestick is the league’s oldest venue, and as Kaepernick forges his role in the franchise’s future, it seems fitting that construction on the Niners’ new home is already under way 30 miles to the south.

As the 49ers plan a move away from the ground made famous by its legends, they do so with a quarterback who signifies the NFL’s evolution. Big, fast quarterbacks are nothing new, but the ones who can do what Kaepernick and Robert Griffin can are. The touchdown runs and the read options are fine, but what should scare the Atlanta Falcons most about next weekend are the throws Kaepernick made when he needed to. His pass up the seam to Michael Crabtree to make the score 21-14 could not have been thrown any better. In the fourth, Kaepernick’s throw to a streaking Vernon Davis hit him square in his outstretched hands.

There was no play Kaepernick couldn’t make, and when there’s only so much a defense can stop, it ends with the type of night he and his offense had on Saturday. Standing at his locker after the game, Packers defensive tackle B.J. Raji fielded every question asked of him, but to many, he had the same non-answer. When they’re clicking like that, does it feel like they’re unstoppable? “That’s a question better left for a coordinator,” Raji said. If Saturday night is the new normal in San Francisco, it doesn’t seem like a question better left for anyone.