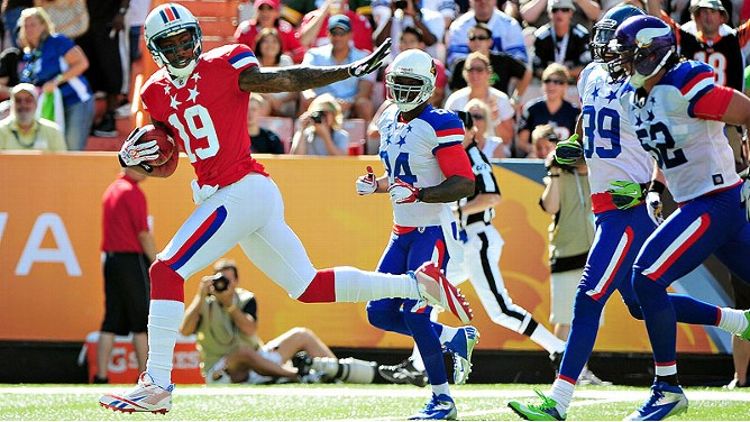 Let’s fix the Pro Bowl. As currently constructed, it’s a colossal waste of time that only vaguely resembles football, like somebody multiplied the XFL by negative one. Most NFL fans will tell you that they don’t care about the game, but it did a 7.0 rating last year, so somebody’s watching it. Imagine what the rating would be for a remotely entertaining product.

Get rid of it, you say? Not likely to happen. Players around the league have Pro Bowl incentives built into their contracts, and the NFL sells the television rights to the Pro Bowl as part of their TV package. That 7.0 rating and the NFL brand still draws advertisers, so the Pro Bowl isn’t going anywhere for a while. We’ve come up with a few ways to improve it, and we’ve got a couple more ideas that could serve as eventual replacements for this stupid game.

Save the Pro Bowl!

1. Turn it into a football laboratory.

The NFL did this with the World League of American Football (eventually it became NFL Europe before eventually becoming nothing) when it aired on USA during its two seasons of existence, both in the sense of its presentation (helmet cam, radios for quarterbacks) and actual football product (two-point conversions). The NFL also grabbed the overhead camera idea from the unaffiliated XFL, which also experimented with new rules during its lone season. The best stuff from those leagues was eventually implemented into the NFL’s product for the better, but innovation has otherwise been limited.

This year, the gimmick that was supposed to lure people in was in-game tweeting. Who could be more excited about someone going to a computer terminal in midgame to send a pithy message about being at the Pro Bowl? What, that didn’t make you tune in? The NFL should make it clear that you’re going to see things during the Pro Bowl that are dramatically different from the standard presentation and flow of an NFL game, and use it as a hook to get people to tune in. In-game tweeting does not qualify.

Like what? We thought you’d never ask. Bring the helmet cam back for replays and let us see what Aaron Rodgers sees. In fact, go to the end zone camera that coaches use and that virtually all Madden players know and love and use that as the primary camera for a quarter. Experiment with no announcers and just use the crowd noise, or pipe in a different feed. What would it be like to exclusively listen to the coaches for a possession? Give Jared Allen a microphone and follow him onto and off of the field (with a censor close by) for a few minutes. Let current players into the booth for an extended stint. Put microchips in everything and expand the graphical options available to the television network.

As for the football side, well, let’s start with those microchips. See if the Pro Bowl can serve as a test of some sort of technology that accurately depicts where the ball should be spotted at the end of a play or if a touchdown should be awarded. We should be past the point where referees and low-level employees holding chains should have to run onto the field in a perfectly straight line to accurately measure ball placement. It’s 2012. Implement a three-point conversion from the 15-yard line, or allow them to retain the football if they score a touchdown on a conversion attempt from the 25. Laser goalposts. Let players run toward the line of scrimmage before the snap, CFL-style. Prevent teams from punting more than once per half.

You can probably think of dozens more. Nobody’s tuning into the Pro Bowl to see real football anyway, so why not take it to another level and see if you stumble across something fun?

2. Get rid of the aspects of the game that make it look silly.

The running play we linked to in the intro is the perfect example of a play that exhibits what’s wrong with the Pro Bowl as currently constructed. It’s an off-tackle run that’s conducted at subpractice speed by everyone on either side of the ball, and the fans are smart enough to realize it and boo. Nobody’s enjoying that.

Our solution is to just start removing the aspects of the game don’t hold up in a meaningless exhibition. Running plays are being blocked and defended by players who don’t care whatsoever, so get rid of them and start every play out of the shotgun. In fact, get rid of the offensive linemen altogether and turn it into a 7v7 game. The big guys can still come to Hawaii, but nobody’s tuning into the Pro Bowl to see a well-executed trap or a stonewall in pass protection. There have only been three sacks over the past two games, with one on Arian Foster and two on rushing quarterbacks Cam Newton and Michael Vick. In lieu of a pass rush, put a five-second timer on the screen (and scoreboard) and rule the play to be a sack if the quarterback doesn’t have the ball in the air by then. (As part of this, you would also have to re-ban intentional grounding, which is legal in the Pro Bowl, and allow cornerbacks to jam within five yards of the line of scrimmage, which is not.)

If you’re going to feature your top offensive stars in a shootout and use that as the ticket to entice interest, just go all the way with it.

3. Combine the Pro Bowl rosters with a pool of impending draftees.

Take the same 100 NFL players or so who make it to the Pro Bowl and, in this scenario, add the top 100 college football prospects who are healthy enough to play. Randomly mix and match them into four teams, and play a four-team tournament (under Pro Bowl rules, of course). Do two games on Wednesday night and have the winners play in the standard Pro Bowl on Sunday.

Everyone wins a little bit here. NFL personnel guys get to see how college prospects react to practicing and playing with guys who are much better than them. College players get to show off their abilities while playing alongside some of the NFL’s best players. Fans get the first glimpse of the league’s next crop of stars weeks before the draft. You don’t really care about Ben Roethlisberger throwing to Antonio Gates, right? What about Andrew Luck throwing to Mike Wallace? That isn’t more interesting?

Let’s pretend that we’re in the distant future and the Pro Bowl isn’t contractually obligated to exist. What can we do with that weekend instead?

The NFL’s actually doing this for the first time next Saturday, which is a time slot that makes no sense. Anyone who is married and either hosting a Super Bowl party or going to one is going to get struck down by their significant other saying something like, “We’re going to watch football all day tomorrow! Let’s watch something else tonight.” This is guaranteed to happen.

Instead, do the awards banquet a week before the game, so players on the Super Bowl teams can come. Invite the Pro Bowl players and the nominees to the event, but throw in a twist: The players each have to cast a secret ballot giving their opinion on who will win the Super Bowl. Imagine a split-screen shot where Eli Manning and Tom Brady are on the screen as Roger Goodell intones, “72 percent of Pro Bowlers think that the Patriots are going to win Super Bowl XLVI.” Then, cut to Justin Tuck destroying a ballroom as he screams about nobody believing in his team. Then back to Eli accusatorily looking at the assembled electorate. This would be great! Maybe it’s just me.

2. Replace it with a professional Combine.

NFL players live off the Combine numbers from before their rookie season for their entire careers, even though it’s clear that they barely resemble the players they once were. Chris Johnson might not be able to run a 4.24 35-yard dash nowadays, let alone a 40.

With that in mind, let’s replace the Pro Bowl with something that splits the difference between the Combine and the skills competition you see in other sports. Have each team nominate their fastest player and send them to some turf field to run the 40-yard dash. (Does this sound too much like The Hunger Games?) The fastest guy gets bragging rights as the legitimate fastest player in the league. Maybe you throw him $100,000 and a guaranteed 99 speed rating in Madden. You do the same thing with powerlifting and each team’s strongest player.

If those groups lack star power, bring in the quarterbacks and have a Punt, Pass, and Kick competition. Which quarterback do you think can throw the ball farthest? Michael Vick? Matthew Stafford? You kinda want to know, right? So do I. And quarterbacks kicking is never not funny. We would all watch this. At least once.