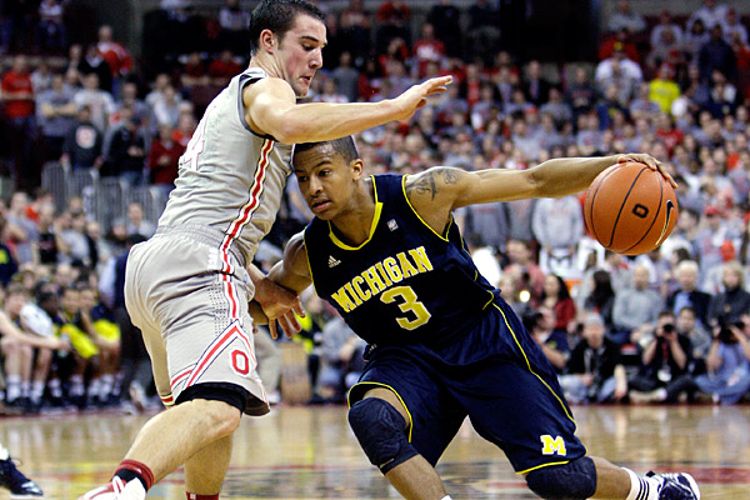 This weekend, third-ranked Ohio State defended its home court against no. 22 Michigan, beating the Wolverines 64-49 on Sunday. For those of who didn’t watch, here’s a peek at some of the highlights from the game.

Whoops. That’s not a highlight reel from Sunday’s game — that’s a clip of Evan “The Villain” Turner ending Michigan’s season two years ago with a 37-footer at the buzzer. I’m not sure how that happened. My bad.

Well, I guess we’ll just have to forget about the video and jump right into the winners and losers from Sunday instead.

Big Ten basketball, like its fans, is often labeled as boring, sluggish, and ugly by people outside the Midwest. And rightfully so. After all, it is the conference that gave us the thrilling 38-33 snoozefest between Penn State and Illinois in 2009, as well as the 36-33 Penn State win over the Wisconsin Buzzcuts in last year’s Big Ten tournament that set basketball back 50 years. Thanks to games like those, Big Ten basketball has kind of become like the Snuggie — it’s not an easy product to defend, but those of us who love it don’t feel like we need to defend it anyway. It is what it is and, dammit, if you can’t appreciate a blanket with sleeves or a brand of basketball that places an emphasis on valuing possessions and playing defense, well, that’s on you.

The point is this: Sunday’s game between Ohio State and Michigan was vintage Big Ten basketball. Those of us who love the product felt like we were treated to a grind-it-out slugfest featuring two teams that played excellent defense throughout. Those who hate the product probably felt like they were watching Alabama-LSU on hardwood and likely spent halftime debating whether they should keep watching or play a masochistic game of Operation by trying to shove an ice pick through their pupil without it touching their retina.

If you would’ve told a Michigan fan before the game that Jared Sullinger would shoot 5-of-11 for 13 points, that William Buford would shoot 5-of-13 for 12 points, that Deshaun Thomas would shoot 4-of-9 for 12 points, and that Trey Burke and Tim Hardaway Jr. would both score as much or more than each of those guys, he probably would’ve asked you to repeat what you said because he would’ve been so confused. But once he understood what you were telling him, I’m guessing he would’ve been thrilled with his team’s chances of pulling off the upset win on the road. Unfortunately for that fan, though, the rest of Ohio State’s guys (read: Aaron Craft and Lenzelle Smith Jr.) completely outplayed the rest of Michigan’s guys, which proved to be a huge difference in the game.

I’m not sure what it is about Sunday games on CBS that bring out the best in Smith, but in Ohio State’s two games that fit those criteria, he is averaging 22.5 points and 9.5 rebounds. That’s compared to just 4.8 points and 4.3 rebounds in Ohio State’s 20 other games. Smith was far and away the MVP of the game Sunday, not only because he poured in 17 points and grabbed 12 boards, but also because he did a pretty good job of containing Hardaway. Meanwhile, Craft had a typical Craft performance; he did a little bit of everything (seven points, four assists) and especially shined guarding Burke on the defensive end. Sure, Burke finished with 13 points, but he also had five turnovers, and if you watched this game closely, you likely noticed that outside of a disgusting step-back 3 and one instance in which Craft overhelped, most of Burke’s points came either when Craft was out of the game or from terrible hedging by Ohio State’s big guys on ball screens.

In case you missed it, in the first half Thomas fell to the ground after apparently catching an elbow while tightly guarding Smotrycz, with “apparently” being the operative word. The officials went to the monitor to determine whether Smotrycz should be ejected. CBS then broadcast the replay, which showed that even though Thomas flailed backward and checked his lip for blood no fewer than 100 times, he wasn’t even touched on the play. His acting job was so good that even after I watched the replay 10 times, I still thought that maybe Smotrycz’s elbow grazed his lip and somehow made him bleed. And by “his acting job was so good,” what I really mean is that it was so blatantly obvious that he was acting that the refs took away the foul they had called on Smotrycz and gave Michigan the ball back.

Also, Valentine was a loser for two reasons: (A) His nickname is “TV Teddy” and yet I had no idea he was calling the game until the second half. The guy has made a name for himself by being confrontational, emphatic, and relishing in the boos from the crowd. It’s impossible to watch a game being called by Valentine without knowing that Valentine is calling the game, simply because he always finds a way to make himself the focus. He’s college basketball’s biggest villain, and for him to not play a significant part in a rivalry game that decided first place in the Big Ten is completely out of character and a huge disappointment. (B) Any chance to call Ted Valentine a loser shouldn’t be taken for granted.

I’m admittedly overreacting a little bit. Yes, it’s just one game played in January, but I couldn’t help but feel that both teams should be pretty satisfied with how everything played out Sunday. As a Buckeye fan, it’s pretty encouraging to see Ohio State beat a team as good as Michigan by 15 in a game in which its three best players were average at best. Ever since the Duke blowout in late November, we’ve known that Ohio State is capable of steamrolling good teams when it is firing on all cylinders. But the loss at Indiana a month later (when Sullinger, Buford, and Thomas battled foul trouble all night) raised a lot of doubt as to how good the Buckeyes are when only a few cylinders are being fired on. Again, it’s only one game and I certainly would’ve felt much better about it had it happened in Ann Arbor instead of Columbus, but it’s great to see Ohio State make a commitment to play good defense and find a way to grind out a win against a good team when things aren’t exactly going its way offensively.

For Michigan, the encouraging takeaway from Sunday is this: Not a single player on the team had what could be classified as a good game (I’ll give props to Jordan Morgan for what I’d call a “decent game” though), and yet with less than 5:30 left, the Wolverines had the ball and were down by just seven in a road game against the third-ranked team in the country. Having lost three of their last five, including an embarrassing blowout at Iowa, it might be a little tough for Michigan fans to be excited about their team right now. But the way I see it (this is going to sound like an insult because it’s coming from a Buckeye, but I swear it’s not), Michigan is essentially one of the best midmajor teams in the country.

Every time I’ve watched the Wolverines play this year, I’ve got the feeling that they’re one or two pieces away from legitimately contending for a Big Ten title, but I’ve also gotten the feeling that they’re going to be a tough out in March because they’ve got a couple of stars (Burke and Hardaway) surrounded by knockdown shooters (Novak, Douglass, Smotrycz), each guy knows his role, and they all seem to have bought into John Beilein’s system. If they played in the MAC or Horizon League, the Wolverines would cruise to a conference title, probably get a 3- or 4-seed in the NCAA tournament, and at the very least make the Sweet 16. Since they play in the Big Ten, though, they’re bound to lose a few along the way that they shouldn’t lose. This doesn’t change the fact that they’ll still be dangerous come tournament time, and with the no. 2 recruit in the country in Mitch McGary coming to Ann Arbor next year, it appears as though they aren’t going anywhere any time soon.

This one was kind of an easy call. Ohio State scored more points than any other team in the game, while no team scored fewer points than Michigan.

Eds. note: We updated the lede of this story because we forgot about Florida-Mississippi State. Oops, sorry guys.