Want to Rebuild Your Dormant College Football Program? You Need a Coaching Moses! 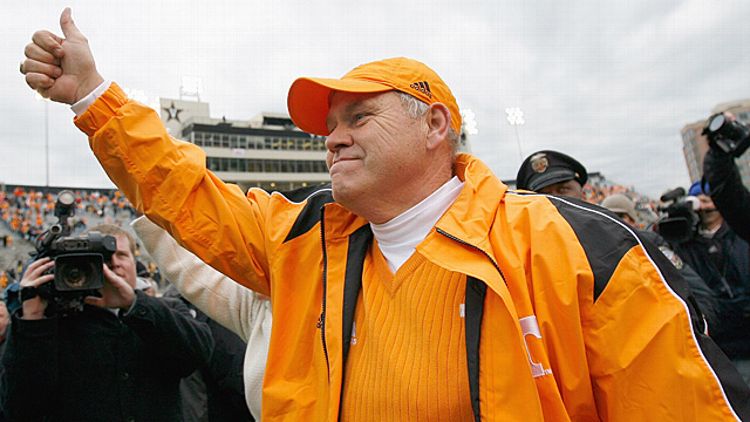 It goes without saying that the most difficult endeavor anyone takes up at the collegiate level is forming an intramural flag football team. The mere logistics are frightening: finding at least 10 people who can agree to not be drunk for the same two-hour span, one day a week; figuring out what sporting goods store will sell the cheapest pair of cleats and accept their return two months later with no questions asked; rejecting at least two dozen Anchorman references as suggested team names; and, of course, bullying the dude with the lowest opinion of his athletic abilities into playing center.

Take that situation and extrapolate it into creating a college football team from the ground up, and one that’s going to challenge someone other than the Pi Lam dudes. It takes a leader of inordinate energy and charisma, someone with youthful vigor, a strong sense of purpose, a refusal to look the other way when difficulties arise. Obviously, someone like Phil Fulmer.

The former Volunteers coach will be the face of the revived East Tennessee State program, but not necessarily the actual coach … which I suppose will make him a lenient, grandfatherly figure who doesn’t have any real sort of authority, i.e., exactly what he was in his last couple of years at Tennessee. But what’s most surprising about the Fulmer hire is that it’s not the least bit surprising. Plenty of ground-up programs have tapped Moses-aged men to lead them to the promised land, or at least to the point where a younger, cheaper option climbing the ranks can take them into Doak Campbell Stadium for a $750,000 check and a 75-0 ass-kicking at the hands of Florida State. See Bill Curry at Georgia State, Larry Coker at Texas–San Antonio, and Dennis Franchione at Texas State. It’s a win-win, even if the results on the field say the opposite. So which dormant programs stand the best chance for a revival?

Wichita State’s gotta strike while the iron’s hot, right? Now, I’ll admit that Price seems like the wrong guy for the job, or really any job at this point. He retired last year after a stint at UTEP that was fairly successful in terms of wins and losses, and fairly successful in terms of rebuilding his reputation after being fired without even coaching a single game at Alabama for reasons that were humiliating for the Crimson Tide faithful and the Price family, and hilarious to everyone else in the known universe.

Likewise, can a guy who did his best work in Pullman, Washington, and El Paso handle the bright lights and media scrutiny of Wichita? That’s a question, but the bigger one lies in how I think this will be much more valuable as a psychological experiment on recidivism; after all, the last time Price landed a huge gig, he used the school’s nickname as a deviant sexual euphemism. If he can withstand the temptation here, I think he’s cured.

Before you point out that the Ol’ Ball Coach is a satisfied employee of the University of South Carolina, and his buyout might be something like 75 percent of the state’s annual GDP, remember this: GW is regularly the most expensive college in the country, with annual tuition and fees at nearly $46,000 a year. It could probably earmark the tuition fees of the suburban Philadelphia contingent of the incoming class and buy the entire city of Columbia.

Secondly, Spurrier is nothing if not vengeful. Don’t think he’d want a chance to stick it to Dan Snyder in his own backyard? Not only that, but Spurrier doesn’t even have to pull SEC-style tricks to hook his players up with sweet summer jobs; you don’t have to work at a car dealership or a construction site to get a shady, do-nothing, cash-under-the-table gig in D.C. That’s pretty much every job inside the Beltway.

This looks hopeless only if you’re under the impression that this team needs to be good to be successful. Contrary to the idea that the nascent NYU Violets would have to compete against the Jets and the Giants, you have to think about what it takes to get the attention of the typical NYU student, the guy who’s busy transcribing interviews at his Pitchfork internship (“Do I have to include every time he says ‘kinda’ and ‘like’?”) and starting his own R&B project that’s “heavily influenced by my lifelong love of Xscape deep cuts.”

In other words, for people reveling in the most confounding aspects of ’90s baby irony, you gotta fight fire with fire. And Rich Kotite is the biggest blowtorch on the market. You better believe he’ll be rocking a custom-made, Adrian Murrell–era Starter parka and surely we can get any number of graphic designers in the area to spruce up the Violets’ unis with some World League flair. The best part is that the fan base will move on in three years to something with “a little more of a Soundbombing II sort of vibe,” at which point, we can totally rope in Jim Fassel.

University of Denver (dormant since 1961)

Pioneer athletics have been making some real power moves as of late, and it’s understandable: DU needs to do everything it can to support the idea that it’s an up-and-coming private liberal arts school and not the Fruitopia of for-profit education, i.e., the University of Phoenix’s line extension for the hacky sack demographic.

And really, the time to strike is now considering Colorado’s fiscal crisis has it paying coordinators on Mike MacIntyre’s staff in Big Head Todd and the Monsters tickets. Why not hire a guy who’s already a legend in the state, has a major grudge against CU, and is maybe the one head coach who calls himself a Promise Keeper and actually backs it up? And I think the guy’s ready for a new challenge; I didn’t think he could outdo Sold Out Two-Gether (coauthored with his wife) or Blind Spots: What You Don’t See May Be Keeping Your Church From Greatness. But once you’ve authored a book entitled Two Minute Warning: Why It’s Time to Honor Jewish People Before the Clock Runs Out, you can do the proverbial mic drop. The mere thought of possibly topping a book with that title is an affront to השם himself.

Look, the Marquess Wilson–Mike Leach fiasco of the past year felt like a preview of the inevitable Ray-J–Chris Brown Twitter beef we’re all waiting for, which is to say, the purest shot at answering what “the lesser of two evils” really means. It stunk from the beginning, as Wilson made a huge miscalculation trying to leverage Leach’s reputation into a sympathetic response to his own failings. All the same, you get the feeling that whether or not the Washington State gig ends well for Leach, it’s probably going to end soon. As such, why does this guy exile himself to coaching outposts like Lubbock and Pori, Finland? Is it guilt for having spent three years of his life earning a law degree in Malibu?

Besides that, you have to look at the unique advantages that Pepperdine offers a college football program: In Columbus or Tuscaloosa, you see an 18-year-old kid driving a Mercedes and he’s a moving target for NCAA sanctions. In Malibu, he’s considered white trash.