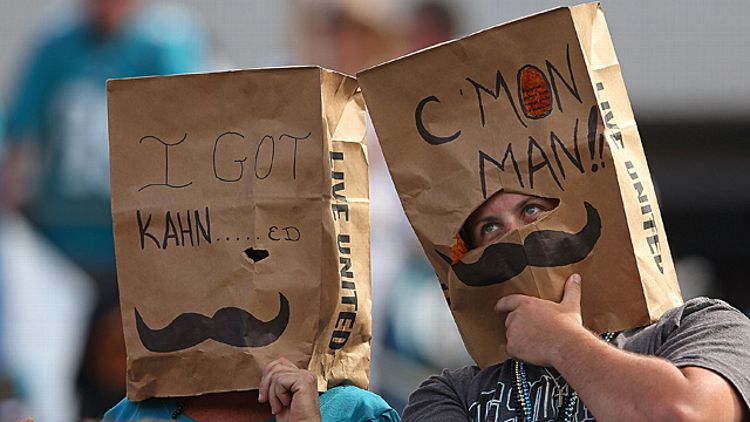 “Jacksonville is the worst NFL team I have ever seen,” says Golden Nugget bookmaker Aaron Kessler. Not many people in Vegas disagree. Nine-point underdogs at home last week against the Colts, the Jags were supported by an extremely positive trend: Home-team underdogs of more than eight points had covered 23 of 25 against the spread. The public didn’t care about that, fading Jacksonville with both fists, and Jacksonville didn’t come close to covering, resulting in the biggest win of the day for players, as reported by BetOnline.ag.

As much as bettors hate Jacksonville, they love Denver. These two play next week, and with early spreads in the 27-point range, the Broncos have a chance to be the biggest favorite in NFL history. Against Philadelphia, Denver garnered 71 percent of the bets (according to our ticket count tracking tool at Pregame.com), and their cover was another win for the bettors. “We got destroyed on this game. Lost not only on the side and total for the game, but also lost big on the first half and second half side and total,” said Mike Perry from Sportsbook.ag.

Seattle is another favorite of the average bettor. Their comeback win and cover was another loser for the books, with 79 percent of the money bet on this game at Mike Perry’s shop backing the Seahawks. With Denver and Seattle on a Super Bowl collision course, many have asked which team would be favored. The consensus Vegas opinion is that Denver on a neutral field would be favored by five points, which equates to over a touchdown at home. Surprisingly, the Broncos would be a small favorite, even in Seattle.

The bettors winning with the popular favorites early on Sunday set up the NBC night game to be a huge decision. It’s rare for the public not to back the Patriots, but the belief that the game was a must-win for Atlanta, combined with New England’s lack of offense, resulted in a majority of the action backing the home team. “We avoided a huge bullet with the New England cover — it was a lifesaver,” said the LVH’s Jay Kornegay.

The LVH takes some of the sharpest action in Las Vegas, and Kornegay told me the wise guys bet the Giants, Texans, and Jets the heaviest. Yup, that’s 0-3 from the guys who make a living at it (making the wise guys 1-9-1 the last three weeks). Professionals hate losing, but they understand anything can happen in the short term.

In college, games falling exactly on the spread was the story of Saturday, including hugely bet games like Ohio State favored by seven over Wisconsin, and Georgia favored by three over LSU. Spread accuracy is a sign of expertise, but it is not good for the Vegas bottom line. “Pushes” keeps parlays for both teams live and result in all teasers winning. Plus, if lopsided action moved the line at all during the week, the favorite bettors win at the lower number, and the dog bettors win at the higher number.

Looking ahead, the love affair with the Broncos seems to be reaching an even higher level. Dave Mason tells me the early action backing Denver over Dallas is the most lopsided he has ever seen. Mike Perry still expects bettors to back the Giants, since the G-Men are still not out of contention in the NFC East.